I'm not really sure where to ask this question as I think it is a design question, but also a printing question. So if there is a better place to post, I'd be happy to harass someone else.
I'm (re)designing a sprinkler manifold for a dripper system because the stupid pegs for this stupid manifold are on top of the manifold, which is a prime spot for any old postal person/dog/raindrop to break off. Of course the pegs aren't sold separately so you have to buy a whole new manifold. Seems like a great use for a 3D printer. 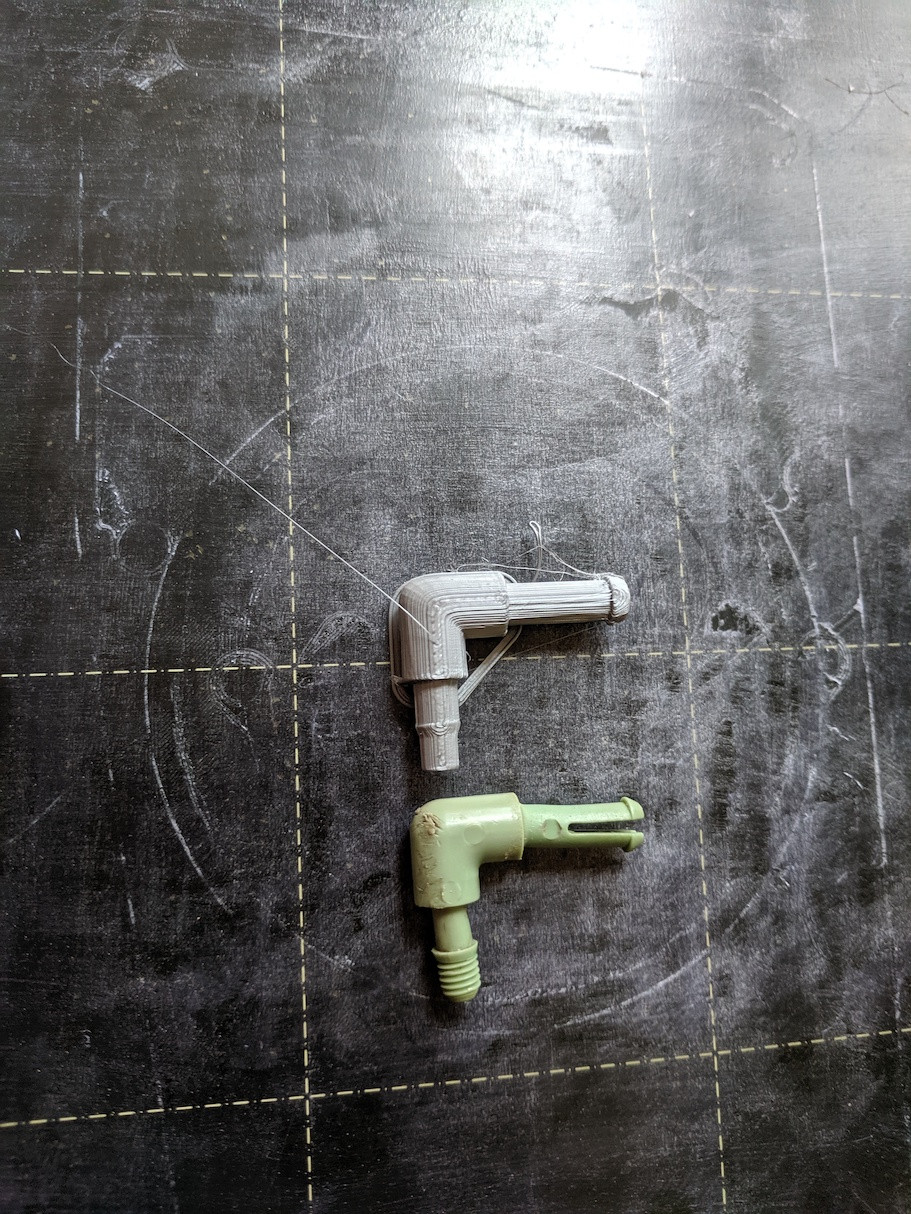 I designed a new manifold and decided the pegs were useful in case they broke off. I was thinking having them screw in would be a better design, but for the life of me I can't get them to actually screw in after I print. Here is the fusion 360 file. This is generally what it looks like: 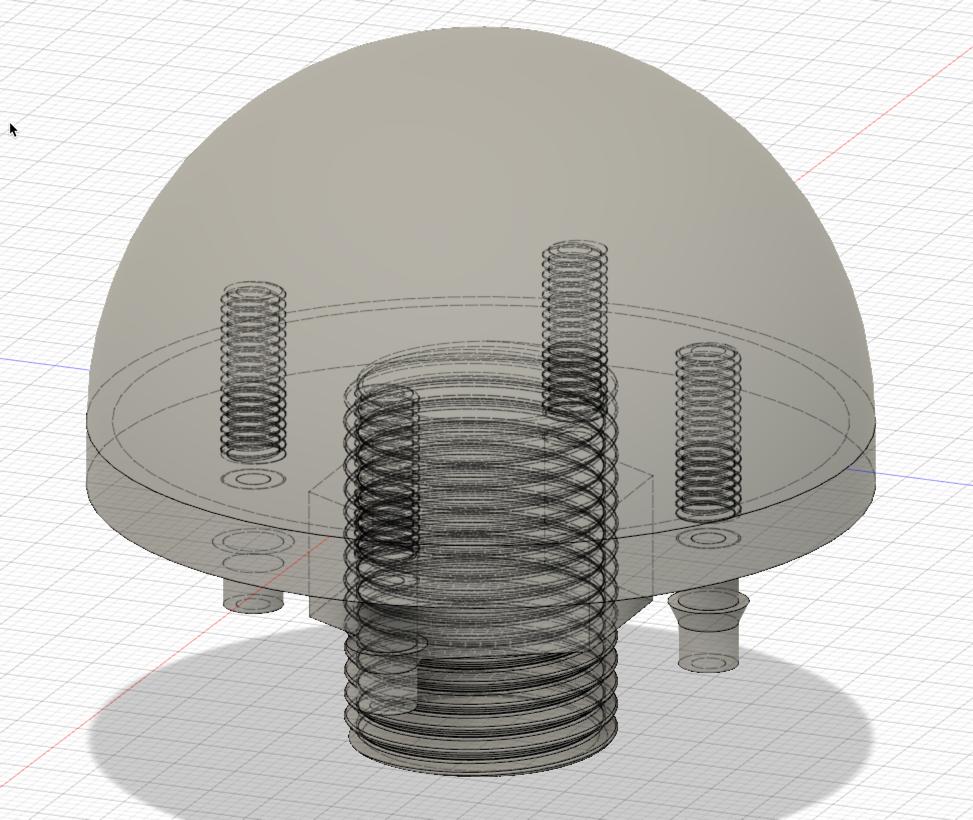 And here is the resulting stl file.

After several prints, the pegs won't screw into the manifold base. I push and I turn and turn but the threads just won't bite. The 3/4" pipe threads fit just fine, so I know threads can be printed, but these pegs are stubborn.

I guess my question is, what's a good design for a peg thingy that needs to attach into a manifold, but also pass water? Should I try to replicate the cantilever thing they have going on, or is a screw better? Any ideas why my pegs won't screw into the base of my mushroom? This is my first attempt at 3d modeling so I'm not totally familiar with all the terminology, so any pointers there would be helpful. Thanks!

I examined and sliced your STL file, and the profile of your threads looks very strange.

It's definitely possible to do very strong, perfectly-fitting threads down to small sizes (at least down to M4 or slightly smaller) using modern inexpensive 3D printers, and contrary to widespread belief (there's a well-known YouTube comparison with a major test fallacy claiming otherwise) they should usually be stronger than threaded inserts against being pulled out. But you need to get the thread profile exactly right.

Most real thread profiles are trapezoidal, but yours peak at points and have round bases. This is unlikely to match the external thread on the part you're trying to fit to it, and it's going to have major dimensional accuracy issues because of the sharp point which can't necessarily be represented in the layer resolution.

I'm not familiar with Fusion 360 so I don't know how to tell you exactly, but most CAD software has libraries for generating threads conforming to standard thread profiles. If you want to do 3D printed threads, you should look at those and figure out which one you're trying to match. Or, if you want to replace the pegs with your own design anyway, just pick a reasonable one for both.

Generally, most modern threads use the basic ISO metric thread profile, even if they're not standard metric diameter or pitch: 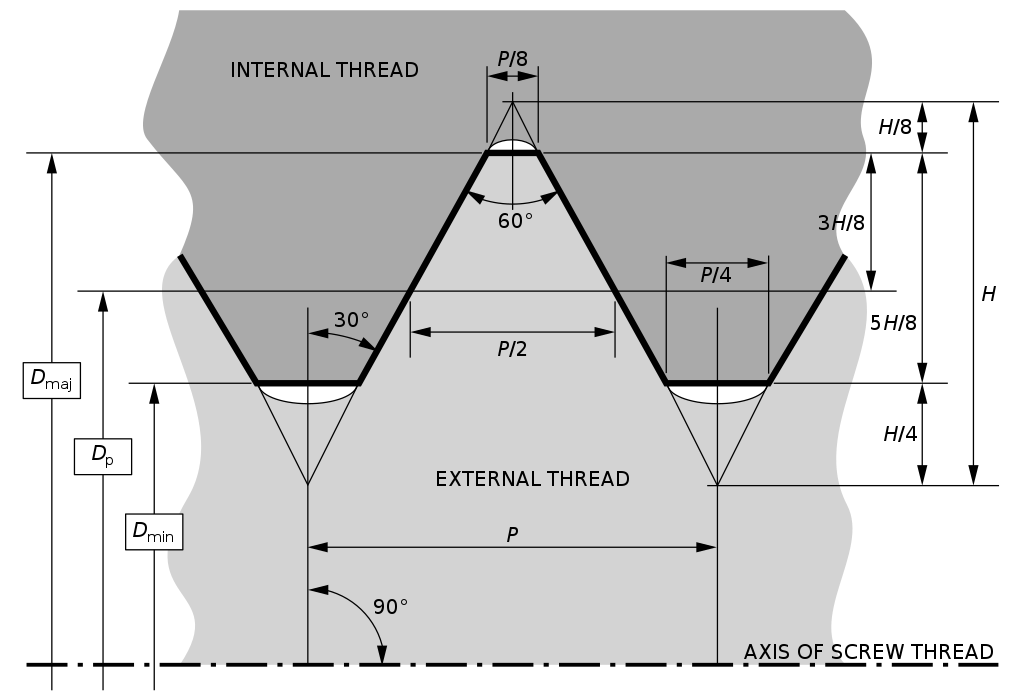 Your cross-sections should look roughly like the "internal thread" side of that.

If I may suggest a slight alternative: don't try to make the threads part of the 3Dprint. Instead, thicken the walls where the threads would have been, increasing the ID (inner diameter) of the hole, maybe even "thread" to match the outside of : metal threaded inserts. Those can be screwed in, .
Perhaps a small "T-nut" (pick the size you need) would be sufficient, and you could create holes in your printed part for the penetration tips.

With the suggestions from @R.., I played with a couple of different screw profiles that come with fusion 360, and found these settings to be helpful: 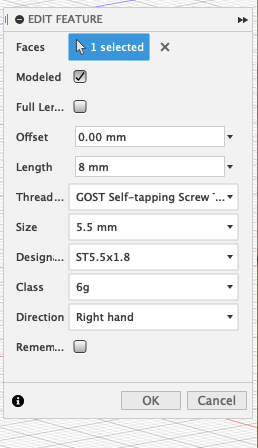 After cutting the hole with these screw settings, I selected all the faces of the hole and off set them by -0.1 mm. Originally, I was offsetting the hole by like -0.02 mm and the peg wouldn't screw. After learning a bit about tolerances of printers, I expanded this to the .1 value and it screwed in magically! I haven't yet worked out if the pegs are water tight, so I may have to revert back to the previous thread settings that seem like they would be tighter, or maybe I'll invest in an o-ring. Suggestions welcome.

Thanks to everyone for their input.

Not the answer you're looking for? Browse other questions tagged prusa-i3 3d-design or ask your own question.

14
Tips for making parts that push/snap together
29
Designing clips that won't break
5
Opening .STL to scale in Print Studio (Dremel)
1
Painting an STL file
5
Which 3D design softwares make multi-material amf or other design files that slic3r will slice?
3
What special considerations must be taken when designing parts for 3D printing?
3
How to design gears
3
How do I decide what size my push-fit feature should be?
1
Attach handle on a loose screw
0
3D printing source material and superglue