Choice of lead for lead screw

This video brought to my attention the 8 mm lead of the Ender 3's Z axis screw, which seems like an exceedingly bad choice from a standpoint of accuracy with respect to common grid alignments in the Z direction. In particular, with the stepper having 200 full steps per rotation, the 8 mm lead consumes all the powers of two out of 200, leaving 25 full steps per mm - and 25ths of a mm are not a typical unit that layer heights/feature heights are going to be in. It seems like a 5 mm lead would be ideal, giving you 40 steps per mm, evenly divisible by 3 powers of 2 and one power of 5, for exact tenths and exact eights.

Is there a motivation behind the choice of 8 mm lead? Is this common for other printers, and are there printers that use a 5 mm lead, or 5 mm replacements that work well?

I've not seen trapezoid lead screws with 5 mm lead, you can get 5 mm lead ball screws though.

Direct-drive, 8mm-pitch Z-axis screws is a very common configuration. Although it results in low z-axis resolution, apparently it works well enough for most FFF applications.

Like you, I noticed this curious design as soon as I got into 3D printing. Based on normal design principles, the resolution of the Z-axis of most printers is technically inadequate or barely adequate, at least based on normal principles from CNC machines and other motion applications (my background is semiconductor industry robots).

Printers cut a lot of corners for cost reasons. That's why they cost hundreds of dollars instead of many thousands of dollars like CNC machines. My printer, like many others, has 8mm-pitch screws and no gear reduction. Sticking an 8mm-pitch lead-screw directly onto a stepper is simply a cheap and easy design. You could get better resolution with a shallower-pitch leadscrew, or with stepper gearboxes, or with belt-and-pulley reduction. But it would add cost and complexity, and modern stepper drivers help to band-aid the low mechanical resolution.

The divisibility of the layer heights into stepper motor revolutions is not that big of a problem in the context. Z-axis resolution is just plain low, and evenly-dividable layers may or may not make an actual improvement. I think if you are concerned about Z-axis resolution then increasing the mechanical resolution should be a far higher priority than worrying about even divisibility.

It still sort of bothers me that the Z-axis resolution is so low. But we see that printers like mine tend to work fine with the 8mm leadscrews, even in vase mode, and even with auto-bed-leveling. And I never pay attention to "magic" z-axis numbers, either. I'm sure the Trinamic stepper drivers are a big part of the reason it works so well. Sure, I could buy 2mm-pitch lead-screws and nuts to increase my Z-axis resolution by 4X. Or, I could install planetary reducers to increase it 10X. But the problem I would be solving is apparently pretty minor in practice.

Also: most of these 8mm-pitch screws are 4-start threads. The reason the pitch is 8mm is partly to do with the lead-angle of the threads, and partly to do with the fact that it's a 4-start thread. The more starts a thread has, the higher the effective pitch; other things being equal, a 2-start thread will have twice the pitch, and a 4-start thread will have 4 times the pitch. So why use multi-start threads, if it reduces resolution? Technically, multi-start threads are better for lead-screw applications because they reduce binding forces. Single-start threads, like the normal UNC threads, are unbalanced, and they "push" from only one part of the diameter, so the nut tends to tilt and bind when loaded axially. This is normally fine for bolts which need to wedge in order to stay tight, but it adds friction and play when operating as a lead-screw. Using 2-start threads, the nut is "pushed" from opposite sides of the diameter, so the nut doesn't have the default tendency to tilt and bind. 3-start threads are even better because the nut is stabilized at 3 points, resisting binding forces from any direction. 4-start threads are better still but maybe a bit overkill. All this is to say that the downsides of the high effective thread pitch are somewhat compensated for by the benefits of using mult-start threads. Switching to a single-start 1mm thread would increase the resolution by 4X but would introduce some other downsides of using single-start threads, which technically could cause some other inefficiencies. It's not practical to make 4-start, 1mm thread or if it were, it wouldn't be a common part and thus probably even more expensive than just using gear reduction.

I think that if you have T8x8 you can use 4 milling heads (the screw has 4 starts) and therefore cut away the material faster. With a T8x2 mm you can use only a milling head at time.

This is speculation, since my local supplier prices them the same.

Also, microstepping is always used, especially if bed leveling is active, therefore you get at least 4x the resolution you think: 10 um per microstep. More than 4x microstepping may not be reliable, given the reduced additional torque provided by the motor and the higher torque required by a T8x8 mm lead screw (higher angle of attack, or what is that called).

Summary: it may be cheaper, and surely provides enough accuracy for the printers which use them. It's 4x faster than a T8x2 mm lead screw and 8x faster than a M8 threaded rod. This affects print times too.

Well, you can use the screw with the size you can get easily, but sometimes can be messy at the time to mount to the printer, for example I'm using on two printers a standard thread 1/4 which measures 6.35 mm so is a little hard to coupling. 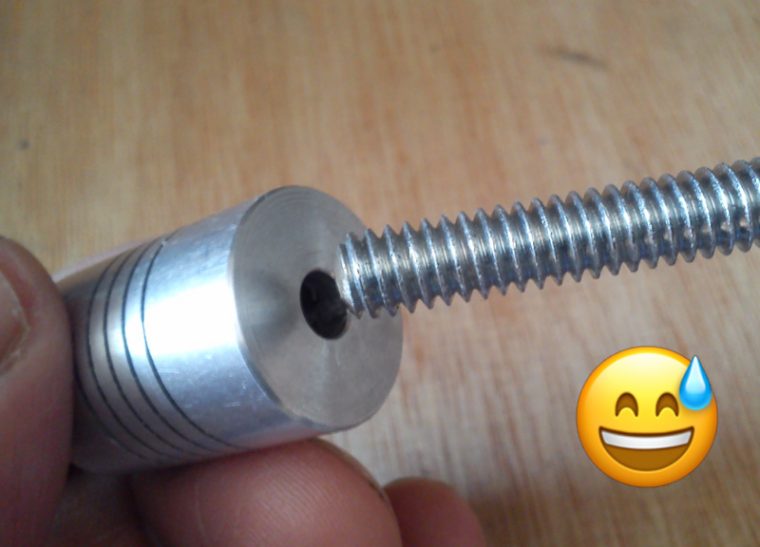 However milling the thread this can be mounted correctly, but the screw is soft and can be bent or warped easily making your printer wobbly and and produces failed prints. 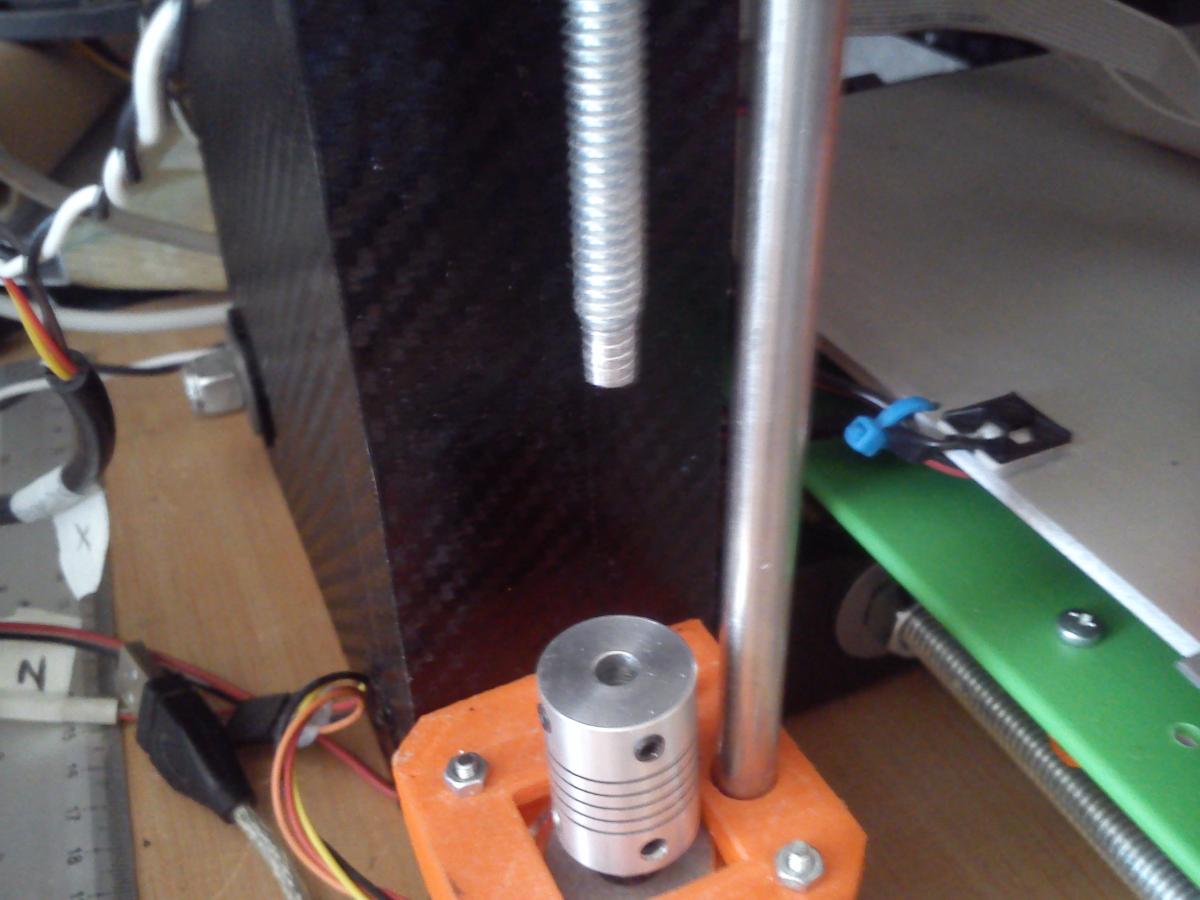 However I´m satisfied with the printing quality and I can set prints with 0.1 and can increase 0.05 by 0.05

Now I want to mount an screw of 10 mm to minimize wobbling generated by those warped (bow) that repeats variation on size (x,y) on every cycle or every revolution. The 10mm screw are completely straight. I don't think that the stepper motors can be compromised with an extra weight.

So, Z layers can be at 0.05 mm but it can be achieved 0.02 mm tested until now. But wider diameter can achieve smooth edges.

You are delving into the darker recesses of 3D printing here!

The simple answer is that the Z-axis screw on all the cheaper 3D printers are pure crap! They use 8mm With triangular threads because it they are cheap and most software works with it.

The first major upgrade most folks make to a printer (after the print bed surface) is to replace the Z-axis screw and nut. Many are poorly mounted and/or warped, resulting in Z-axis wobble. Most suffer major backlash - offset only by the fact that most printing only ever goes upwards...

The ideal upgrade would be to replace the rod and nut with a good quality ball-screw assembly that is properly mounted. But, if you do change the pitch, make sure you can alter the software to account for it...

That said, if your prints are good, enjoy, and don’t sweat the details!

5
Is there a reason for the z-axis M5 drive nut to be super loose on the lead screw?
7
Would using a leadscrew with 1 or 2 mm lead, en lieu of 8 mm, result in a better printer?
3
What size is the lead screw
6
Lead screws - M8 instead of M5?
7
Does anyone know the thread size (pitch and lead) of the Anet A8's lead screw?
2
Lead screw holder - shall I buy metal or just use a printed one?
5
Z axis: Stepper motor and lead screw torque calculation
11
Are there practical reasons to NOT use a stepper motor with lead screw for the X and or Y axes?
1
3D Printed Lead Screw
3
Lead screw orientation