I just installed my (v3) BLTouch with a vanilla version of Marlin (1.1.9) on my Ender 3 and everything seems to work fine (including auto home) except the probing. It repeatedly does the first three probes (successfully) but then tries the fourth and fails. Even when disabling the axis movement (X/Y stepper motors) the issue persists, which would indicate that it is not a bad connection or physical location dependent. Any ideas on how to troubleshoot?

On second thoughts, it seems that it now fails inconsistently, so it is probably a wiring issue, although there is still the issue of it not retracting before printing and not leveling well when it does (although those issues would be more appropriate for a separate question), among other things.

<Edit: Resolved, I both replaced the BLTouch and updated my firmware, but I believe it was the latter that fixed it.>

Is your BL Touch a v3 (likely if you've only just purchased it)? If so, make sure you're using the bugfix version of Marlin 1.1.9, which supposedly fixes the compatibility issues. I say supposedly because there's also a capacitor on the mainboard that can be removed to fix the issue, and once I removed it (and commented out the specific v3 bits in the firmware) the BLTouch performed noticeably better than when relying on the bugfix firmware alone.

Teaching Tech on YouTube has a few BLtouch Ender 3 videos, covering the changes for configuring the bugfix firmware and the removal of the capacitor.

I had the same problem. It seems it was definitely a loose connection on the BLTouch. I put a wire tie around the neck of the BLTouch, just underneath the mounting feet, to secure the wire and ensure a good connection regardless of position. It has worked great so far.

I found this and remember doing something similar on my TAZ 5 when I installed a proximity sensor on it. See BLTouch V3 on the Creality3D CR-10S Pro:

The BLTouch V3.x is enough just to install the jumper cap on the CR-10S Pro and it works well in Default(OD) and 5V Logic Mode. (including Smart V3.0 produced by April 4th, 2019)

This solution is complete and safe. You do not need to remove the capacity or add a pull-up resistor for the BLTouch installation in the CR-10S Pro.

Cause of problem: When the inductive proximity sensor is removed from the Ribbon cable breakout adapter, 24V is kept at EL357N pin1

Solution: Install the Jumper cap between the Z-connector signal and GND pin on the Ribbon cable breakout adapter.. It prevent the

How to install the jumper cap: Remove the inductive proximity sensor from the Ribbon cable breakout adapter for CR-10S PRO and

install the jumper cap as like the picture. This operation requires caution. 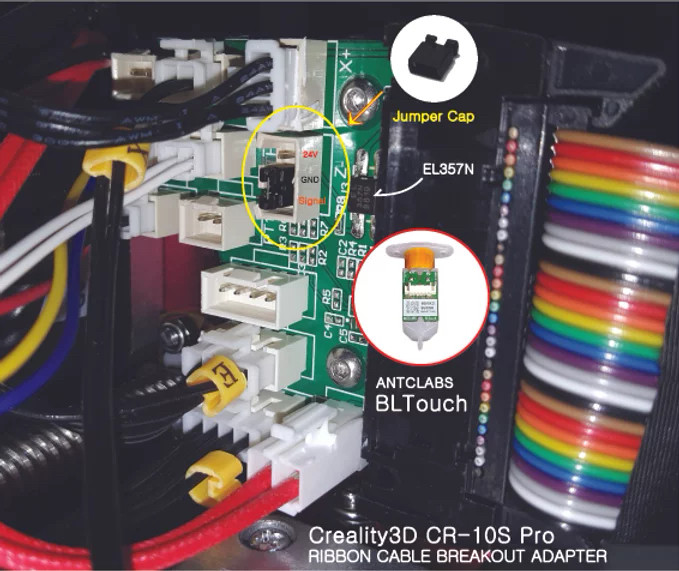 ※ Never install the Jumper cap between the Z-connector 24V pin and the GND pin on the Ribbon cable breakout adapter. 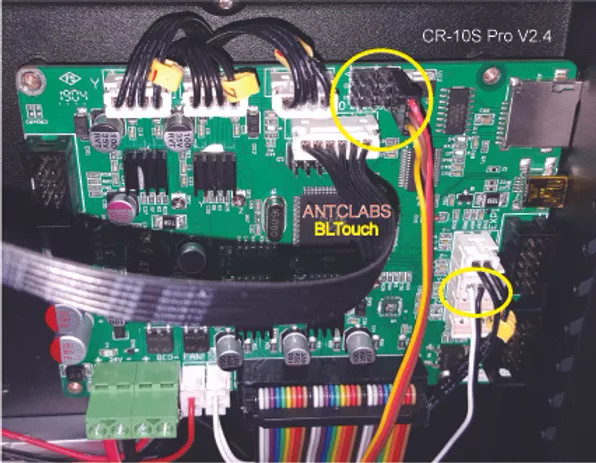 Just leaving this note here as I have had my own BLTouch issues, maybe it will help someone else...

I was getting inconsistent failures on both home and bed level, also would drive into the bed on occasions.

I would first recommend keeping your Z stop switch connected (the BLTouch uses the five pin header on the V4 boards, not the Z stop.

I tried with extension cable and connectors, then hard wired the extension cable, also removed the pin header plastic body on the connector going into the board (as it's not the right type, and sits a bit too high) to make the cable ensure good connection to V4 board.

Correctly levelled bed, Z stop, was getting awesome prints with stock Creality firmware for Ender 3 Pro and BLTouch on v4.2.2 board (without adaptor board version).

I'm racking my brains, replaced nearly all wiring, made sure good connections, changed to Marlin 2.X.X bugfix (which you load onto SD and turn the machine on).

Still random crashes into the bed and bed level fails.

So I'm now getting close to, this has to be a faulty touch surely, I've done my fair share of electronics repair being an electronics engineer by trade.

I'm looking at the touch, I see a solonoid, I checked how it works, the ferrite core looks flush with the top of the touch housing. I turn it a full turn into the touch. I'm getting less errors.

I think I finally ended up turning it about 0.5 mm to a 1 mm into the housing. All seems much better. No fails or crashes since the last tweak of the ferrite grub screw.

If the sensor is a little off on the Ender, and I hear they are, then maybe the position of the ferrite is more sensitive on these machines. That will affect the magnetic flux of the sensor.

I also found a link brief on the V3 probes and there is a section that points out a 0.3 mm gap from top of ferrite to top of probe stated, mine was flush.

I have ordered another just to be on the safe side but I think this may have helped stop my random fails.

After moving house, pulling printer down and rebuilding, I had this issue again... groan....

This time I found the issue, its firmware.

After going through 2 touch probes, rewired (again), screening touch to ground and more, still doing it.

I've been through the same sort of issues and eventually found that it was attributed by the cable and connector. Re-check or re-wire the sensor, this helped me out.

Is it something like in this video? Extending/retracting when NOT probing works fine, but probing fails with the pin not correctly retracting?

Then the BLtouch is defective and it should be replaced. It is not a firmware issue.

5
Saving BL Touch settings
2
Ender 3 BLTouch fails in assorted ways
3
Is a BLTouch probe used during a print after the first layer?
1
3DTouch sensor fails after probe deployment and triggering

4
How to set the boundaries for BLTouch probing
4
The BLTouch is hitting the bed on the double-probing
8
How to increase the amount of probing points for a BLTouch sensor in Marlin firmware?
2
Ender 3 BLTouch fails in assorted ways
2
Why is BLTouch Still Probing Off the Bed Even When `NOZZLE_TO_PROBE_OFFSET` is Set?
1
Bed probing feed rates
1
BLTouch Fails & Scraping at the Left Side of the Table
3
Understanding of the auto bed leveling process (BLTouch)