I am a 3D printing beginner but wanted to get stuck in straight away and design my own 3D objects. I used Sketchup to design a badge of one of my logos. I make sure that all faces of my object are not inside out and show a white face in Sketchup. I also make my entire object a component before exporting into a .stl file. However, when I import into Ultimaker Cura, the base of the object is red. This to my understanding means there is an issue with that face.I have played around with Sketchup several times by not creating a component, reversing the face and I still have no luck. When I reverse the base face in Sketchup so that it is grey, it then shows up in Ultimaker Cura as okay (not red). But when I 3D print it, it still prints it very strangely. I would like to note I am 3D printing with a raft and when I do not use a raft, the object prints fine. Also I have tested printing a small 3D cube with the same settings and the results are exactly the same. Surely you can design objects in Sketchup and print with a raft? 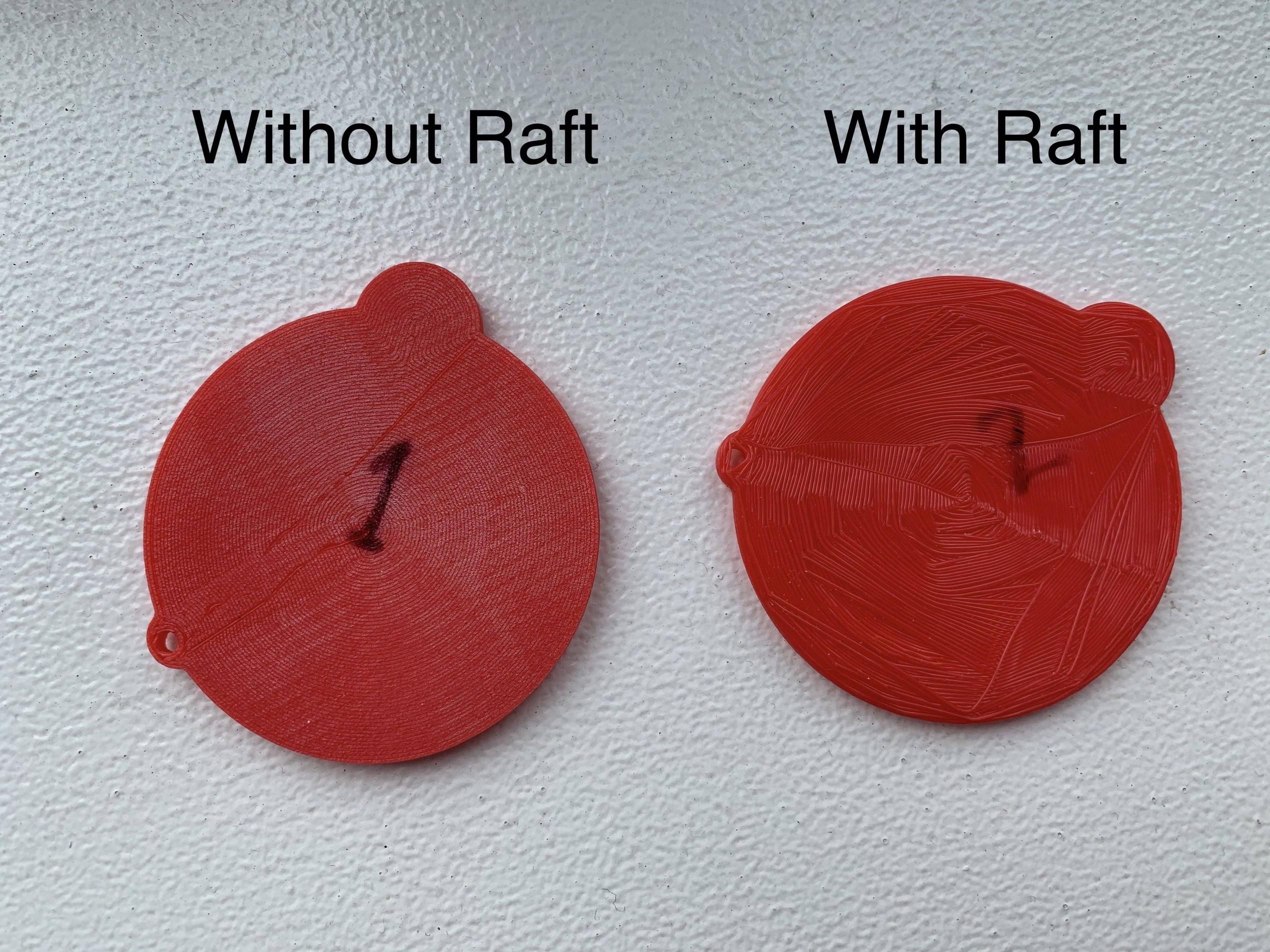 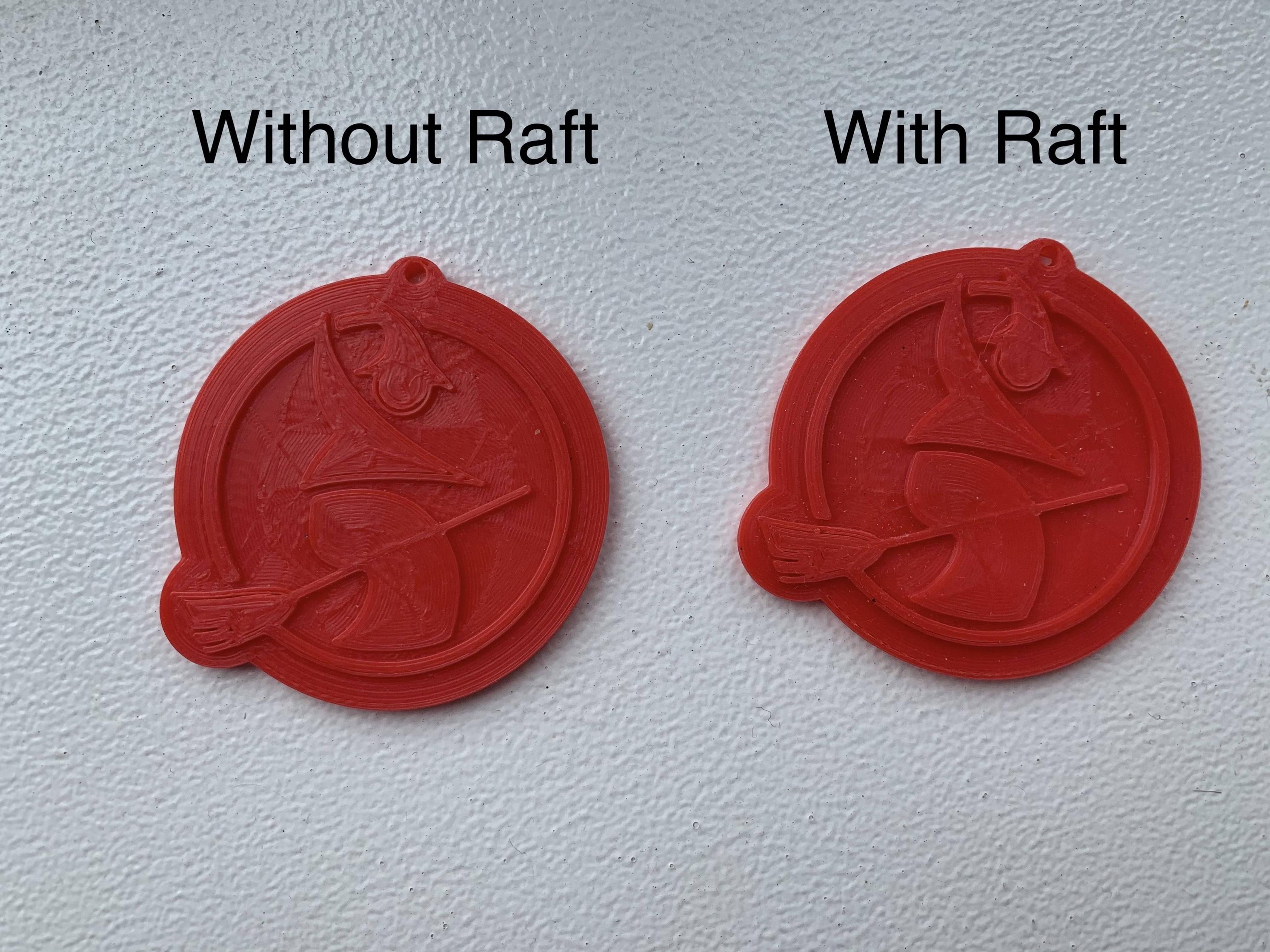 A red surface coloring is normal for the bottom when viewed in Ultimaker Cura, nothing to worry about that (e.i. when that face is touching the build plate; if it is unsupported, you should add support structures but a raft is generally not necessary for PLA).

Rafts are useful when you print high temperature materials that have a large shrinkage when cooled from print to bed temperature (this somewhat mitigates the problems of curling up corners or warping prints), for PLA it is not needed. As seen from the print that is printed on the raft, it's clear that the print to raft distance is to large, the first print object layer is not adhering to the top raft layer very well.

The print that is printed without a raft doesn't look too bad. Some printer extruder calibration could further improve the quality.

Note: This answer is curently wrong because I mentally reversed your "with raft" and "without raft" columns. I'll attempt to fix it soon.

This doesn't look like a problem with your model, but rather a problem with your bed height or slicer settings (possibly both) that may be affecting your particular model worse than others. It's clear from the photo of the bottom of your print that the extrusions that were supposed to be circular failed to adhere to the bed, and instead got pulled to chords between points they happened to adhere at. This could be caused by a mix of:

Using a raft mitigates these things by moving the potential problem to the interface between the raft and the bed; once there's a raft sticking to the bed, printing of the model can ignore the problem. But you should never need a raft. It's a waste of plastic and a workaround for problems that have better fixes, not a necessary part of 3D printing.

The "red" in Cura is not a problem; as I understand it, Cura shows all parts of the model that aren't supported by other parts of the model in red, and this includes the base. However, it is possible that your model has some stray part extruding below the bottom, causing the whole thing (except that stray part) to be printed starting one layer above the print bed with nothing to adhere to. You can check if this is the case in Cura by switching to layer view and looking at the first layer. You should see the whole surface that you want to adhere to the bed; if instead you see just one or a few small blobs, that's your problem.

Not the answer you're looking for? Browse other questions tagged ultimaker-cura pla rafts .

11
Lines of PLA not sticking to the bed
4
My print did not turn out as I expected. Where can I start troubleshooting?
2
Setting up a brim/raft for only a portion of the overall print
4
Slicer settings for easy support material removal
0
Problem with first and last layers
2
Slicer is adding additional floor bed
3
My first layer becomes solid when sections are supposed to have small separations
2
Uneven walls, not solid
0
Sketchup designed "Block with hole" printed solid in Cura
3
Need help printing a quality first layer, but having adhesion and fill issues