Under extrusion when starting outer wall

In this picture, the problem is on the outer wall (see red outer line, the print head is moving counter clockwise. 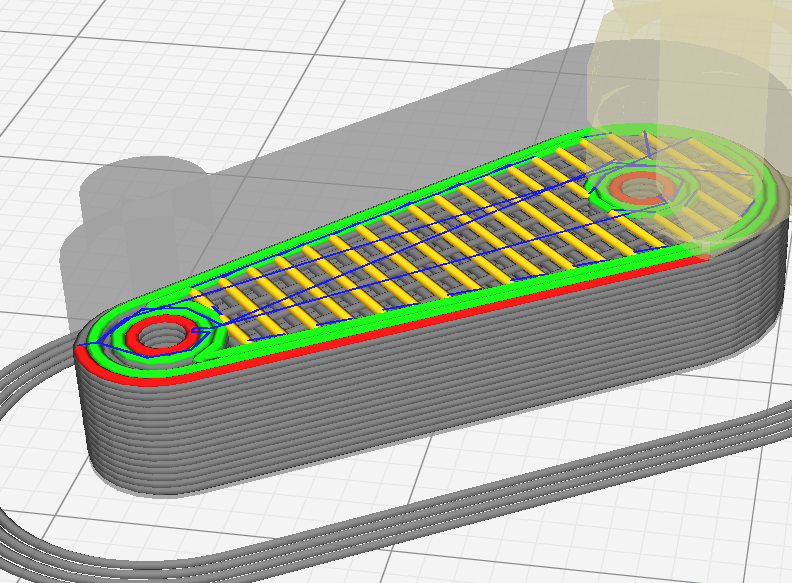 And here is the print showing the issue. Just fine on one side, but terrible on the other, precisely where it starts the layer. Strangely, this only occurs on the layers with infill. The top layers seem fine (despite starting in the same place). I have disabled retraction with no effect.

Here you can see it start at the tip and get gradually better as it progresses. 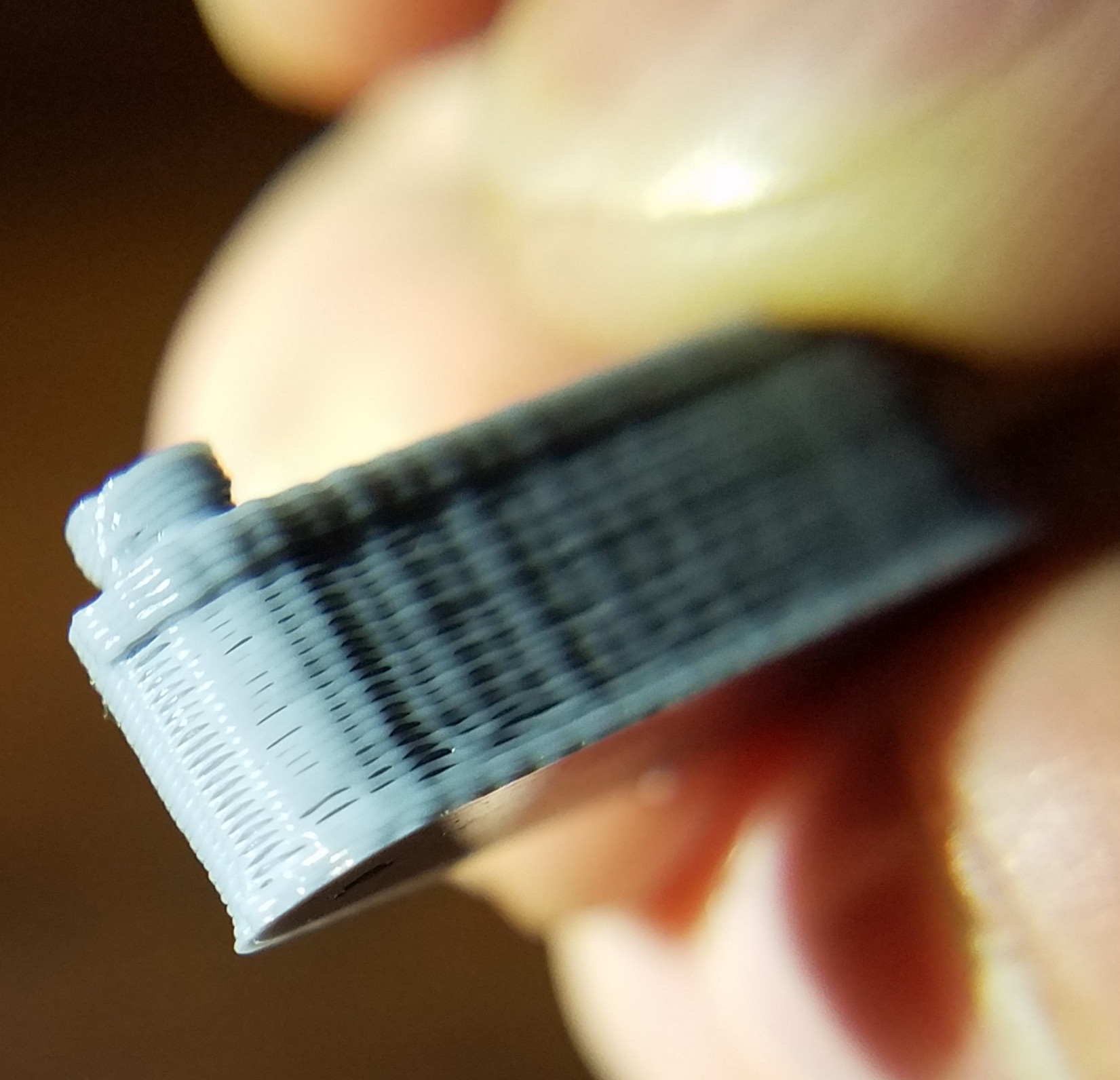 Here you can see that by the time it finishes, it's just fine, and also what a contrast is between the start and end. That should be a flush edge, there. 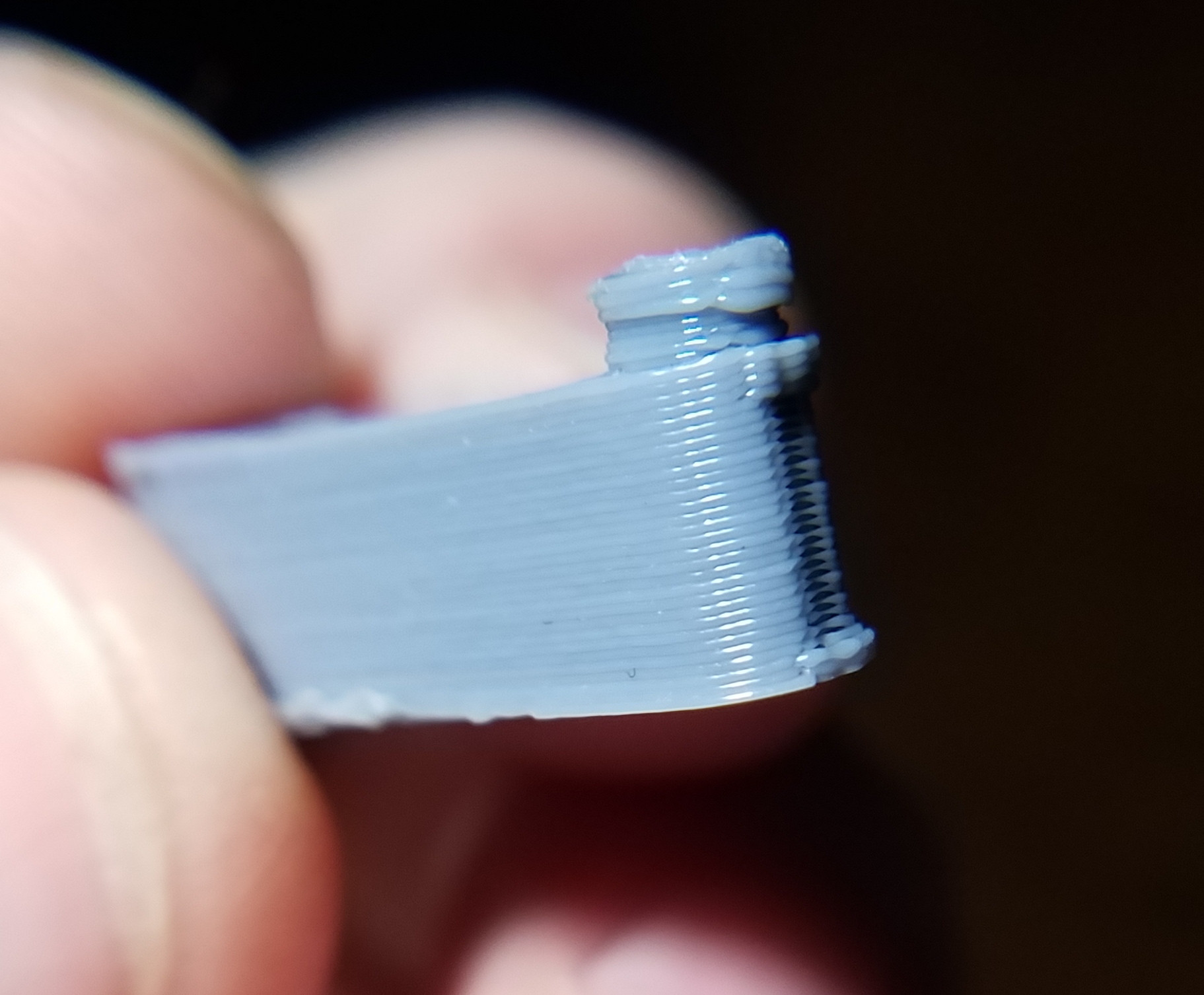 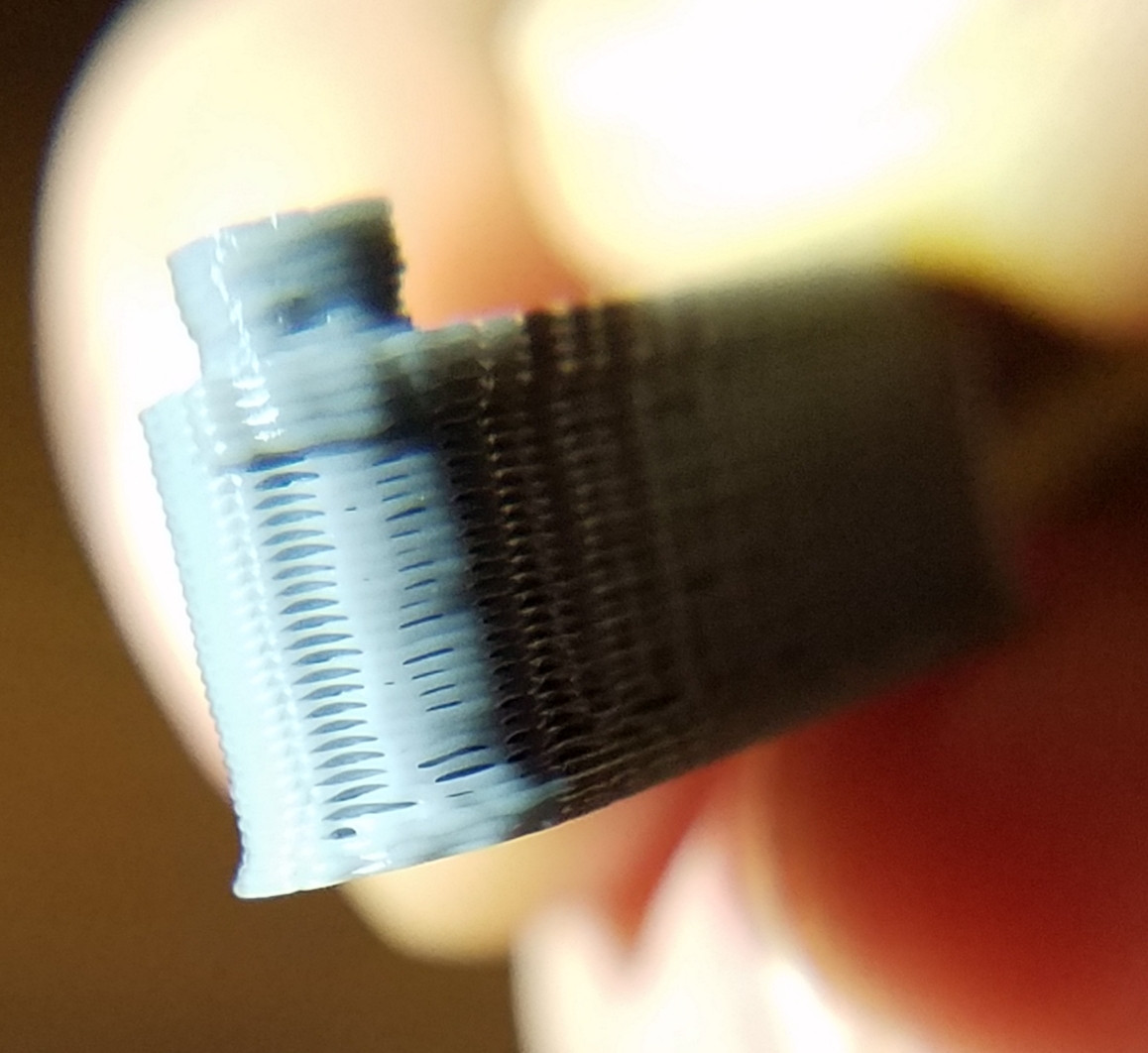 Is there some setting that I should be tweaking? I've exhausted my own ideas of different tweaks to no avail.

This doesn't happen on layer changes. Although it does line up with the Z seam, you can see from the G-code visualization below that the outer wall is the very last thing it does. The issue occurs at the start of the outer wall (still on the same layer) that it has the issue, but by the time it ends the wall (just before switching layers) it is fine.

I've tweaked a few other settings, one by one, and seeing if any have any effect. So far, not really:

What have I done since...

I reset all settings in Cura to a default "Draft" setting and then set layer height to 0.24 mm, and turned off Infill. Then I have tried prints with different settings for "Retract Before Outer Wall" and printing temperature.

Here are those results: 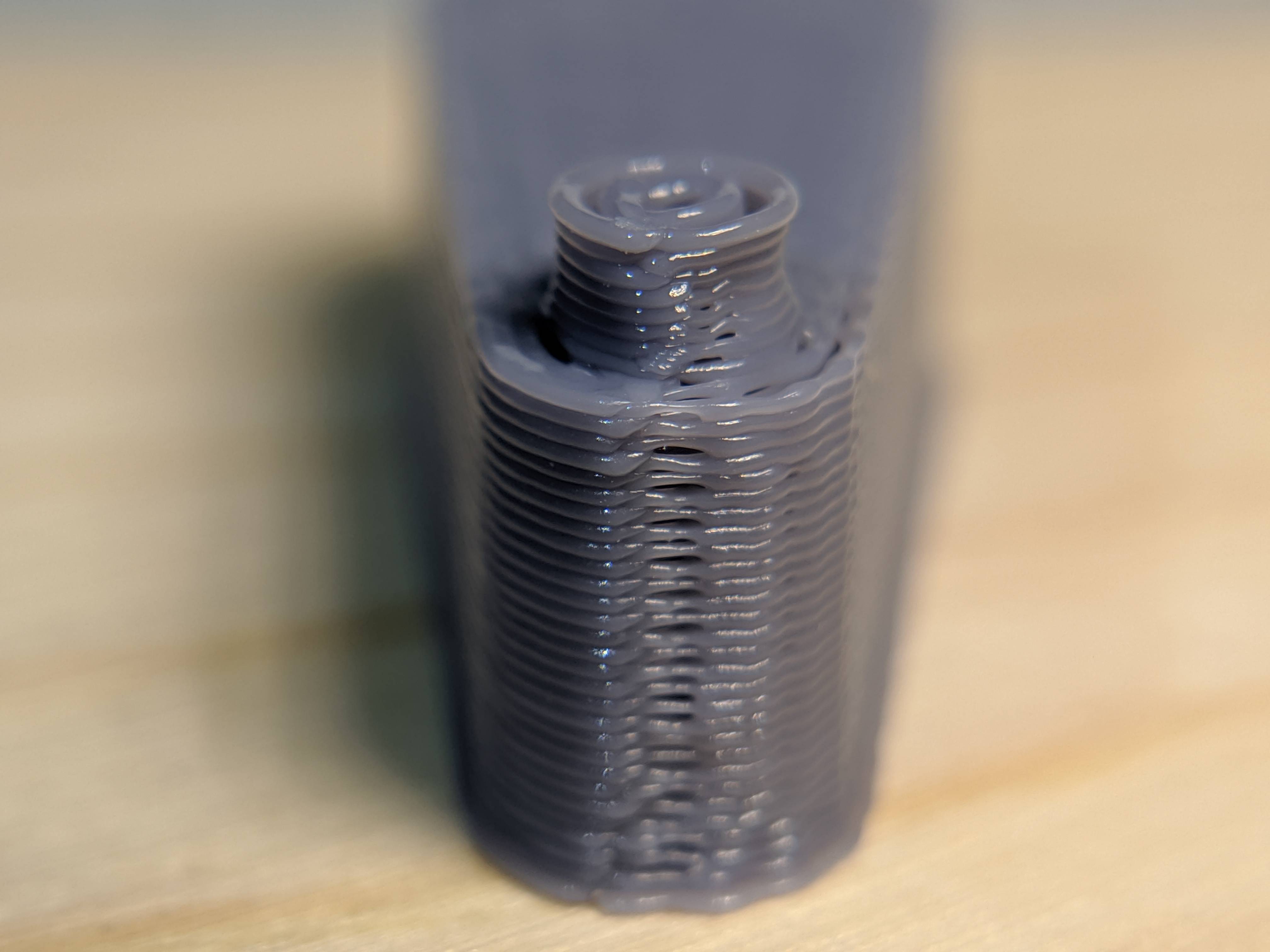 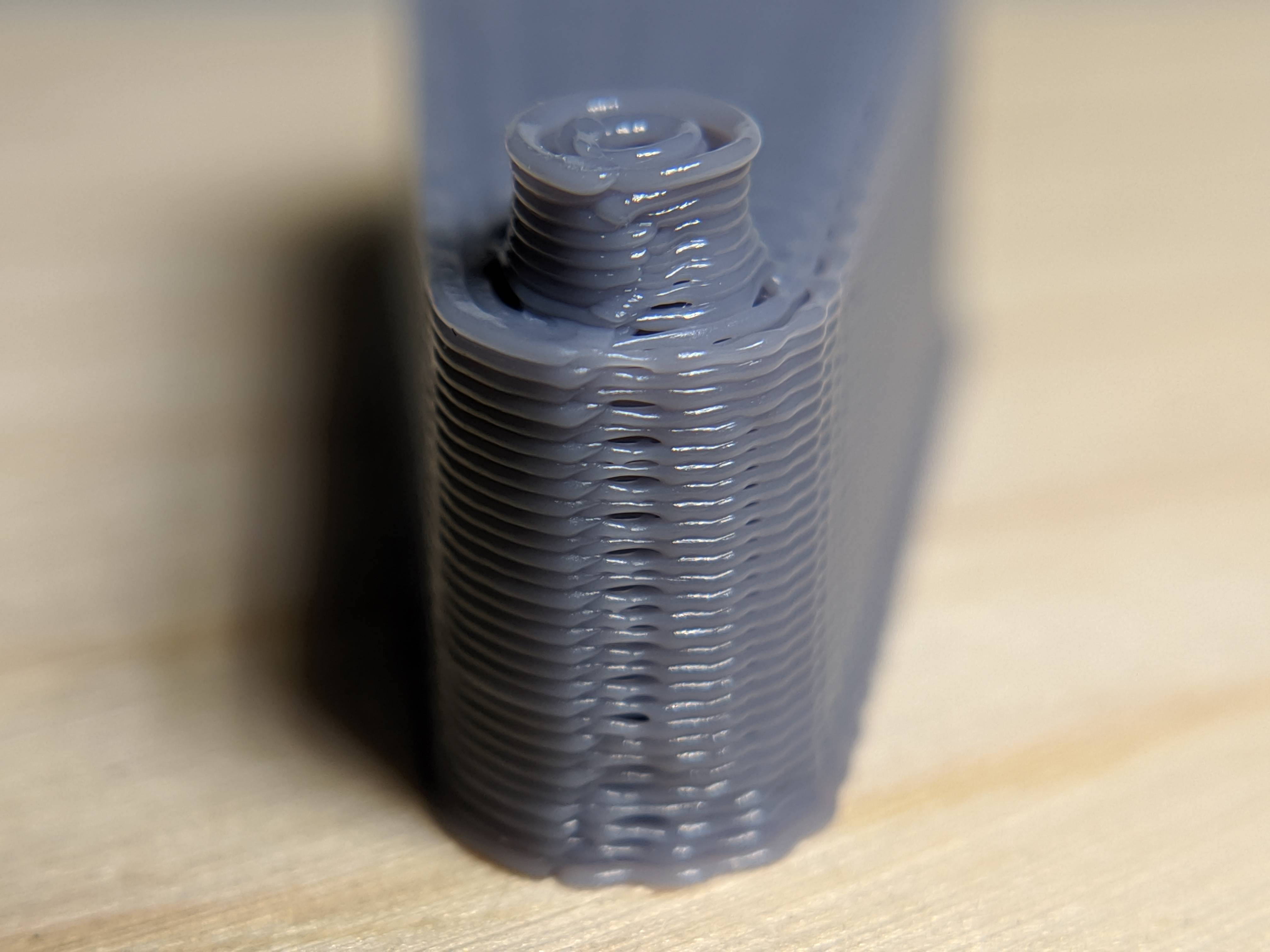 195 °C, 0 % Infill, Retract Before Outer Wall: On Note: the retraction setting resulted in a noticeable pause before printing the outer wall. Retraction distance is 6.5 mm, and this is not a Bowden fed device. 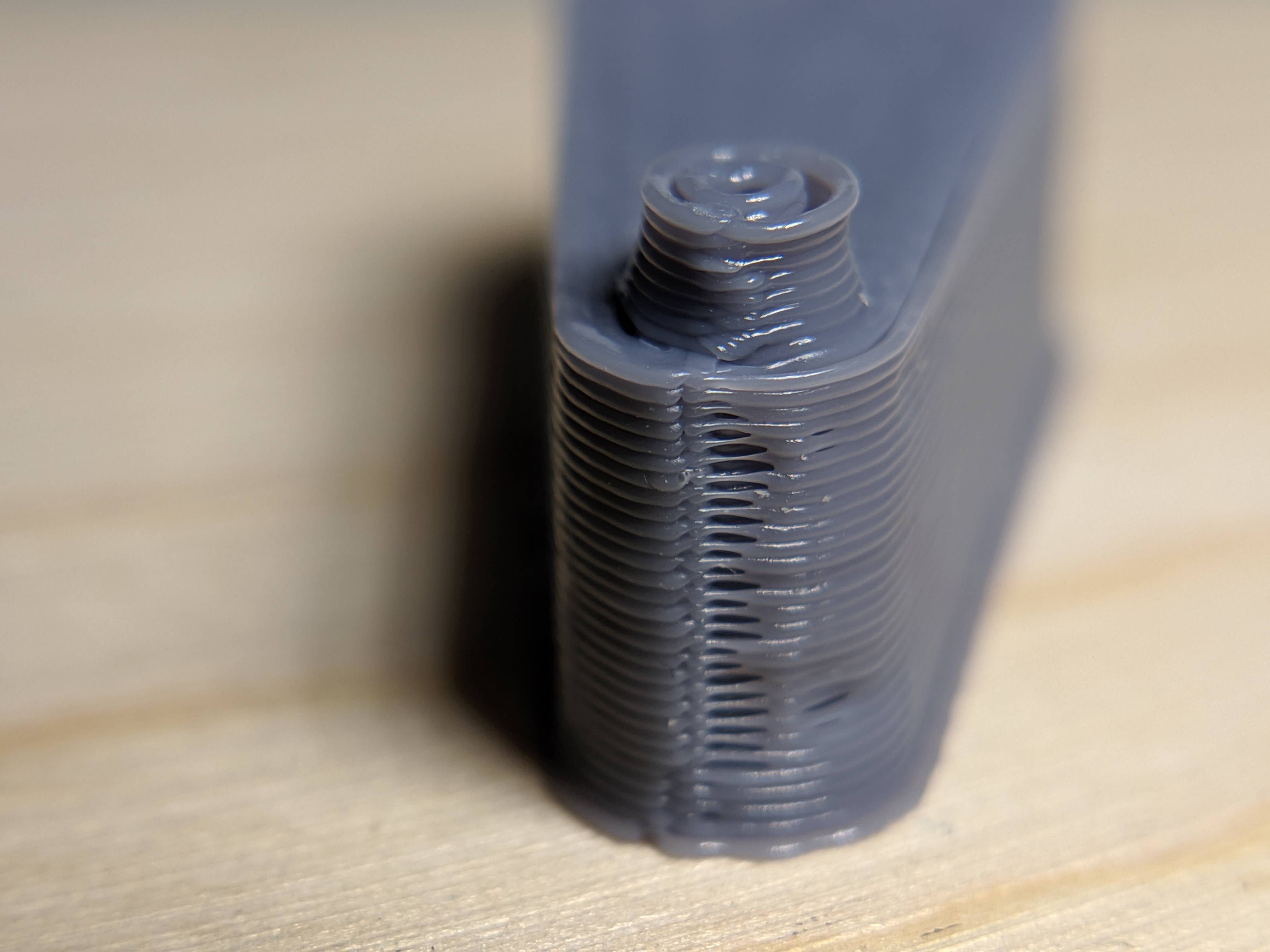 There doesn't seem to be anything strange about the G-code, either. Here are the G0 travels just before the outer wall followed by the wall. 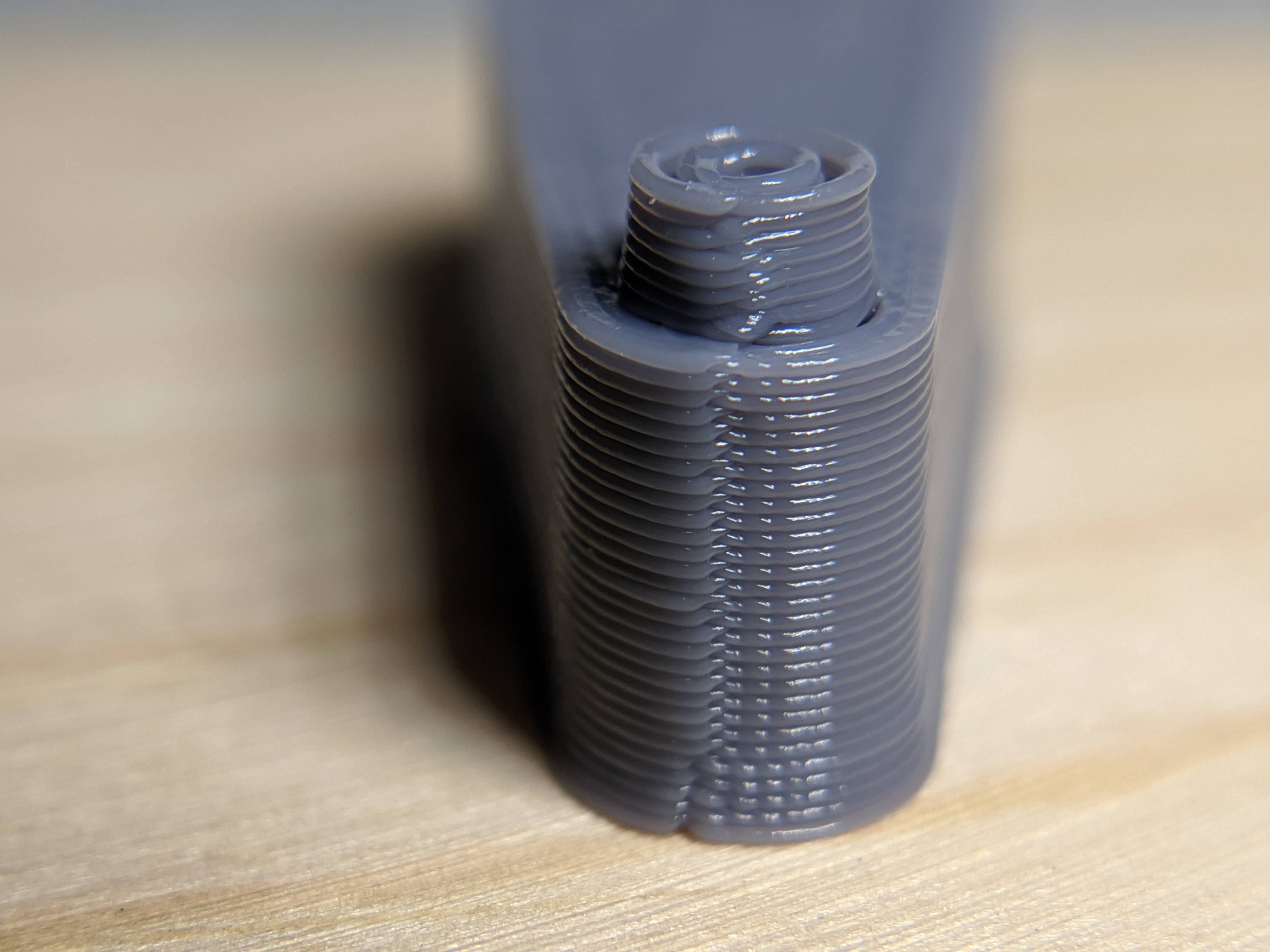 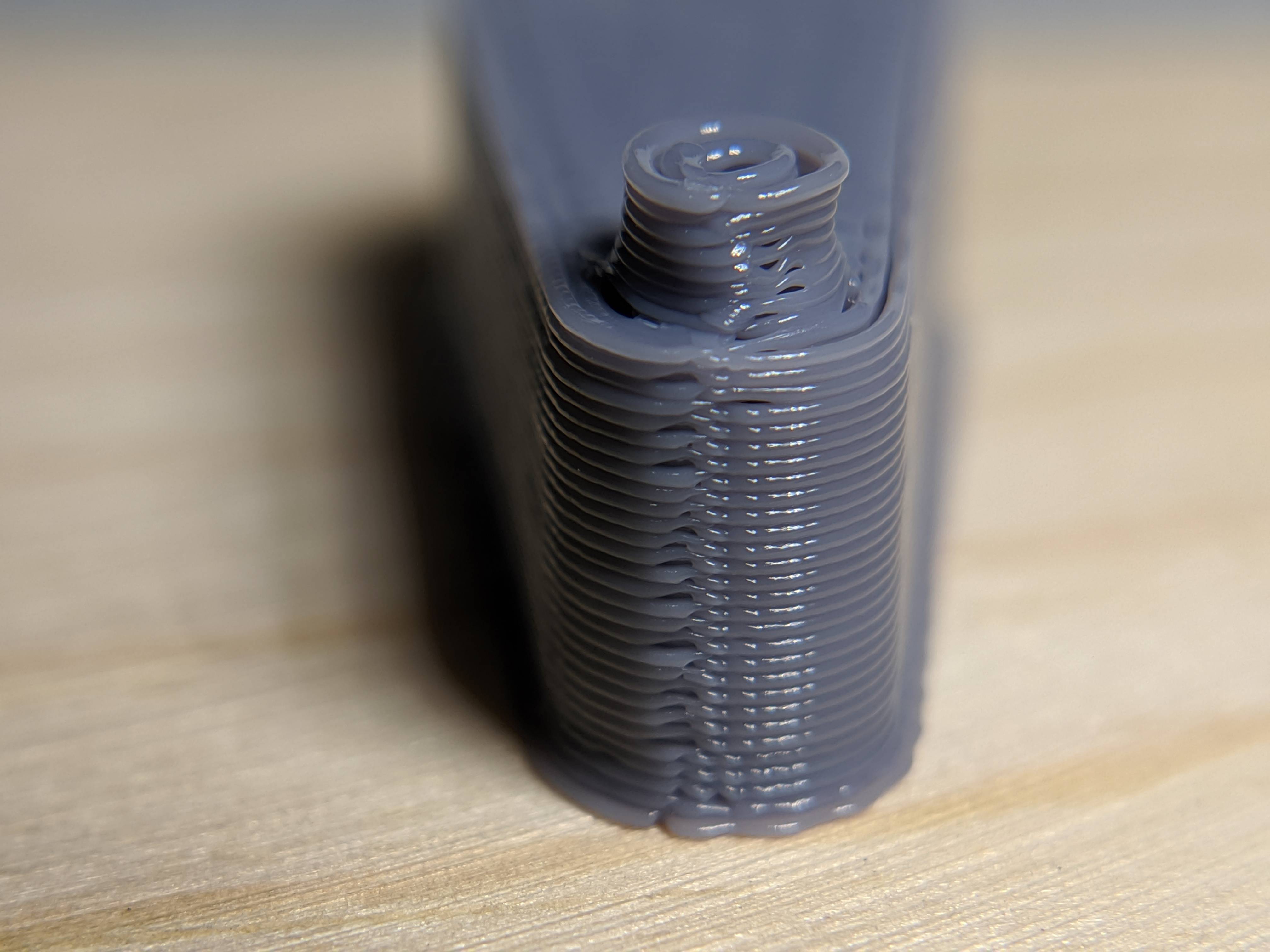 So it seems like an acceleration thing. If I can figure out how to get it to slow down in just the right spots or compensate in some way, then perhaps I can make this problem go away with minimal sacrifice in total speed.

Based on other comments, answers, and question edits so far, in addition to your original question, I believe there are possibly two things going on here: incorrect retraction settings, including a misunderstanding of which settings are relevant and what they do, and issues related to slow acceleration. Both relate to misdepositing/loss of material.

First, some basics. When the filament is advanced to the point needed to extrude material and print at the intended volumetric rate, it's under significant pressure, compressed between the extruder gear and the nozzle. My understanding is that your printer has a direct drive extruder, not a bowden, so there's far less compression than with a bowden setup but it's still there. This means that, if you try to stop extruding, it's material will continue to come out of the nozzle, just at a decreasing rate, until the pressure dissipates. This effect is reduced but still present if the nozzle is held-against/moving-over already printed material, and heavy if moving over empty space, even moreso if moving across sparsely-filled space like infill where it will bond with the already-deposited material and get "stretched"/"pulled" out.

The idea of retraction is to pull the filament back when the print head is moving to a new location without trying to deposit material, to relieve this pressure and prevent unwanted misdepositing/loss of material, and to reverse the process, putting the filament back exactly where it was when the last printed line ended, the next time it starts trying to deposit material.

The relevant options in Cura are:

Now, your other issue may be acceleration. Extrusion works best as acceleration speed approaches infinity, because the extrusion rate and pressure needed to extrude will be fairly constant for the entire line/curve. If acceleration is very slow, pressure will be wrong during the start and end of lines. It's likely that, due to high pressure, excess material will get deposited at the end of one line while slowing down, then after moving to start the next line, even if you retract the filament, you'll have insufficient pressure at the nozzle after reversing the retraction to start the next line.

A jerk limit of 5 mm/s is really low. I'm used to more like 20-30 mm/s. You don't say what your acceleration limit is, but it's probably also low. Slow acceleration has minimal impact if your max speed is slow, because you quickly reach the max speed and most of the print speed (and thus extrusion rate) is steady. But if you want to print at high speeds, you need high acceleration. Try and see if you can increase it. Or accept printing at slow speeds.

Another option, if you're open to hacking on your printer, is replacing the stock firmware with a recent version of Marlin with the Linear Advance feature. It does the math to model the filament pressure as a spring, with a spring constant you can tweak, so that it can compensate for varying print speed and end lines with approximately no pressure remaining.

As @user77232 points out, you may have a general flow rate issue which can be adjusted in your slicer.

This link shows that it's possible it could be your retraction settings before each layer. I'm not sure what it is with Cura, but in MakerWare and older slicers you could specify a retract distance before each layer. I would try reducing this. Also, these older slicers had different retract rates/distances for bases, floors, main wall, supports, bridges, top layers and more. So, this could be why you have different results throughout Z in your part.

From the sliced image you it appears as if long travels are present. High temperature (205 °C is on the upper side for PLA) slow travel moves and long moved allows filament to leak out into the infill region. Once it reaches the outer perimeter, there is not enough of liquid filament available and it will start under extruded.

Lower temperature with 5 °C increments (down to 195 °C) and increase travel speed with increments of 10 mm/s.

I experienced almost the exact issue printing PETG, where severe under extrusion happens at the start of a new layer.

After going though the tool path in Cura I determined that the root cause of this is because the last printing step at each layer is to fill the small gaps. The extruder would extrude very little material while going though the small gaps in the printed layer. The melted plastic in the print head would get dragged out, therefore more material would be lost than what was accounted for in Cura.

Because of the uncertainty of how much material would be lost in the process, there is almost no way to compensate for it. The best "solution" I came up with is to add a small sacrificial cylinder to the model. The printer will fill the small gaps in the main object, then print the dummy cylinder and then print the next layer. This completely eliminated the under extrusion problem at the expense of a bit more material usage. Of course the printed sacrificial cylinder would look really bad with severe under extrusion at the z-seam.

I believe the same solution will also fix your problem: just enable printing outside wall first, and add a dummy cylinder to your model.

The problem seems to occur in the same area; along the z axis. You also seem to have an elephant's foot from the first layer being squashed. Change the flow rate in the slicer. Re tram (level) the bed and clean your nozzle.

I was experiencing exactly the same problem (CR-10S, Cura 4.5, all mechanical issues fixed, new nozzle, new fans, good quality PLA), I would like to add one observation that might contribute to a solution (yes, I know this thread is old but many people are still experiencing this issue (a lot actually) any everybody seems to be stuck in the "you need to level your bed" loop) but this discussion here is going beyond this and is by far the most constructive I have seen so far:

Ok, here goes: when measuring my hotend with a thermocouple probe (Uni-T UT320D) right behind the nozzle (after removing the Bowden tube), I can observe a significant deviation between the displayed temp (= the same one I entered in Cura) and the temperature the filament gets to see. This is around 20 °C in difference @ 200 °C, meaning a setting of 205 °C is actually closer to 185 °C. For the bed the offset is only 1-2 °C. After swapping the glass bead NTC just for fun (Ohms were OK) ...nothing changed. Others have observed this offset in CR10 machines as well (original firmware).

Combined with the fact that we CAN produce nice prints at insanely slow speeds (10 - 20 mm/s), this somehow gives me the feeling that some bug (somewhere) has reduced the heating capacity of the hotend in the affected machines / set-ups... Now this could be a parasitic loss due to a bad connection somewhere but this would quickly lead to other problems (fire) as well (which it didn't - at least in my case).

try retract before outer wall off.

8
Getting started: shell passes not fusing in x/y, and a slanted wavy pattern on vertical walls
4
Strange outer skin print quality on Ender 3
1
Surface artifacts when formation of object changes (Layer inconsistency)
1
Gaps/Holes in the 3D Print walls
4
Bumps in outer wall
2
Gaps between perimeter walls; potential under extrusion?
4
Why is my outer wall layer printing with gaps and flaking off on this specific shape?
2
Inconsistent layer widths and uneven outer walls