Creating a heated chamber from a very large heated bed

In this instructable, a user creates a heated bed from a wooden plank, some nails, insulated copper wire, and a DC switch. He does place an aluminum bed on top of it, but for our heated chamber, we won't use any aluminum on top of these wires. We aren't trying to heat an aluminum bed, but an entire chamber. 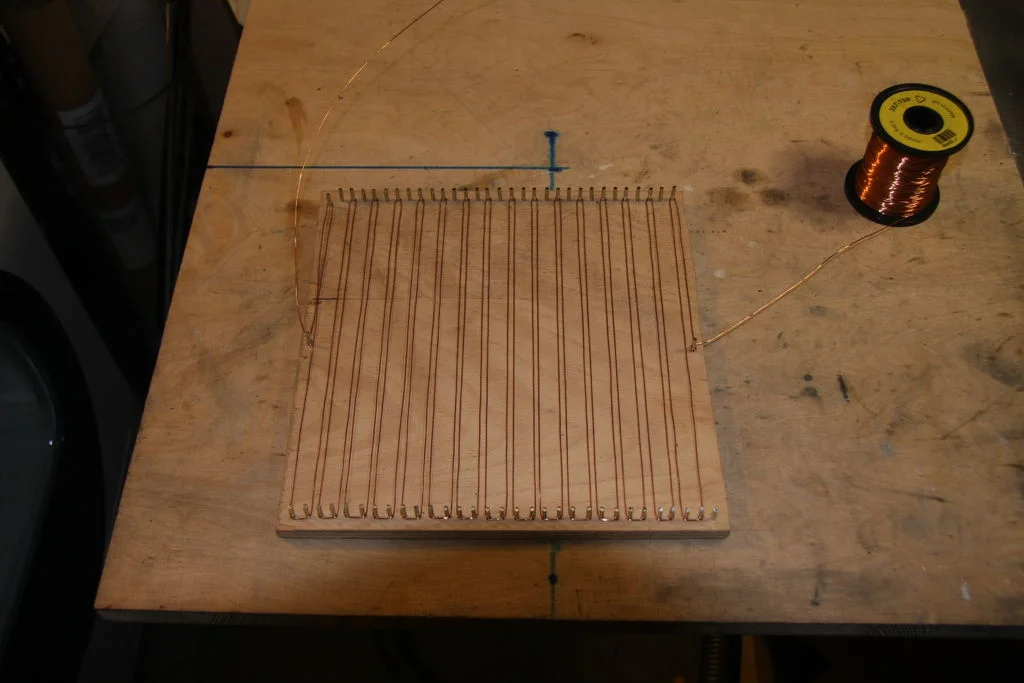 Assume I place a wire loom like this underneath my 3D printer. (I might place some aluminum foil between the wood and the copper wire, to reflect heat upwards more? Is that safe?)

Do you think there are any other hazards here I am not considering?

Could I, theoretically, do this entirely with cardboard, and no wood?

Could I, theoretically, line the inside of my cardboard box like this? Or might the cardboard ignite?

I'd like to use cardboard because it is both lightweight and insulative. I can remove it easier to check all areas of my printer, unlike an enclosure.

Cardboard is fundamentally paper. Paper ignites - just as Ray Bradbury claims - at around 233 °C or 451 °F.

A thin heater wire usually glows red hot under operation. Not dark red, not blood cherry, not dark cherry, it's usually medium cherry to dark orange in operation, as one can easily tell by looking into a trusty toaster oven, which also shows us how powerful of a heating element this is.

In a typical toaster, heater wires are mounted in a metal frame and backed by some non-flammable material that looks like paper but is not. In a 2004 patent for such a method, they use a sheet of mica. But how hot is our wire? Well, under mains power, the wire of a toaster reaches 700-900 °C within seconds, heating the inner chamber of the toaster despite the slots to about 200-250 °C so quick that the bread roasts deliciously... until the heat controlling bimetal strip releases it up.

We operate these wires for at best a few minutes. In an electric forge, pretty much the same wires with a little more thickness to them are run at lemon glow for hours... and they are embedded in firebrick material to prevent them from igniting stuff touching them by accident!

How we know the temperature? Incandescence charts of course: 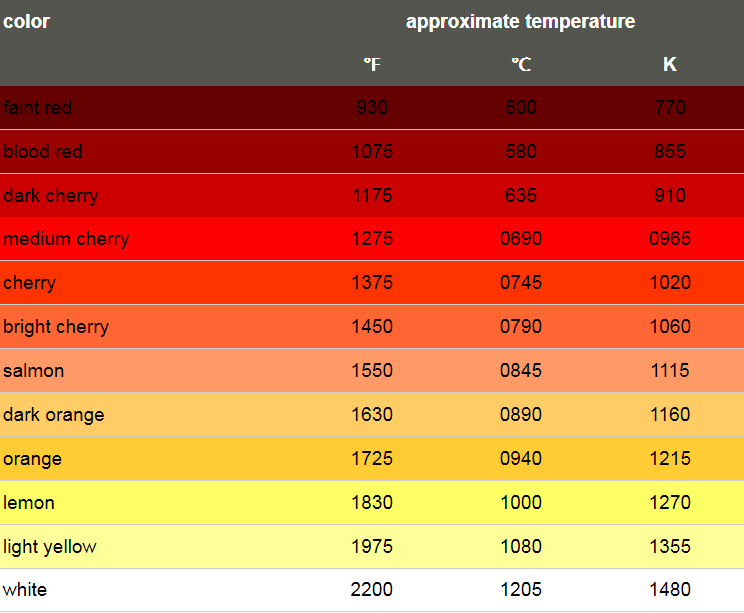 Paper or cardboard backing on heater wires is a bad idea. Mounting the heater wire to a metal frame that is as nonconductive as possible and without a chance that something accidentally touches it is needed. Fiberglass or rock material would serve as a good carrier, an aluminium block with radiators would give a good heating-to-surface mix, especially is precautions are taken to make the wire surface nonconductive.

Even using wood close to such a heater is a gamble I would not want to take. It's also best to mount the heating element into an enclosure that can't touch the wooden outer chamber and that stays put if the enclosure is opened or removed.

Not the answer you're looking for? Browse other questions tagged heated-bed heat-management chamber or ask your own question.

5
Heated bed thermistor placement
8
Heated Bed vs Heated enclosure for large scale printer
5
Weird ripping and warping of ABS print
2
What stepper motor to use in heated chamber
6
How to set up Marlin to use a heated chamber?
2
How to switch firmware from 12 V heated bed to 110 V SSR heated bed?
1
Prusa i3 MK2 Heated Bed Thermal Runaway Problems
0
How is a Thermistor supposed to be installed between Heated Bed and the Glass?
0
How can I extend silicon hotbed wires safely?
0
Setup for a firefighting solution inside a heated chamber that doesn't destroy the printer?