I've just done my first print on an Ultimaker 3 Extended and I'm slightly disappointed with the results, so I'm trying to understand how I can do better next time.

Preparing for printing I naively just dropped the two stl files into Cura, set the recommended layer height and infill, selected support (defaulting to Extruder 1), deselected adhesion, ran the slice, saved the g-code and started the print running. Luckily the head 1 did have the same PLA AA 0.4 filament that Cura assumed.

When the print finished, I stripped out the support structures, cleaning out the hollow, and cleaning off lots of stringy loose filaments between the lower support and the bottom edge of the print.

Even after cleaning up though, the overhanging structure above the support structure turned out to be very rough with many individual filaments visible and in irregular positions, rather than the nice concentric lines in the slice.

My first attempt to optimise the print

Looking at the completed print I realised that there would have been only a fraction of the support structure, and probably clean edges, if the part had been oriented as a d rather than as a p (the rough surface being the bottom of the p overhang).

I re-ran the slice in d orientation and that saved 10 minutes of print time, and a 100 mm of filament, so I know I'll definitely need to look out for that in the future. I can also see how that would fix the problem with the external overhang separating out into loose threads, since that face would no longer be an overhang.

After the first fix, I wondered what I could do with the second extruder and realised that it was filled with water soluble PVA filament. This made me wonder if this would have helped with the internal overhang.

I Configured Extruder 2 as PVA BB 0.4 and selected Extruder 2 for the support structures and re-ran the slice.

I was surprised that the it was now taking 40 minutes longer and using almost 470 mm more filament!

Looking at the slices, Cura had created a huge PVA scaffolding on the outside of the print, leaving the inside, where the previous PLA support had been, completely empty: 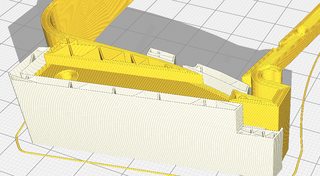 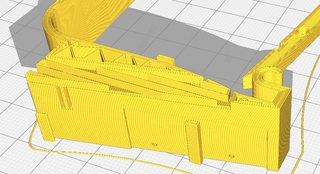 This was not what I was expecting.

Owning the Ultimaker 3 Extended and having printed kilometers of filament on this printer I can tell you that printing with PVA, apart from the slicing problems you mention, is not easy as it looks. PVA clogs up very fast and is very hygroscopic. Moist PVA will make popping sounds on extrusion and is prone to failing. PVA is not my preferred solution. An alternative solution is to use break-away filament, my colleagues have some reasonable good experience with that.

The difference you report could be caused by the slicer settings. I get exactly the same results if you set the slicing parameter Support Placement to Touching Buildplate (first image), or Everywhere (second image). 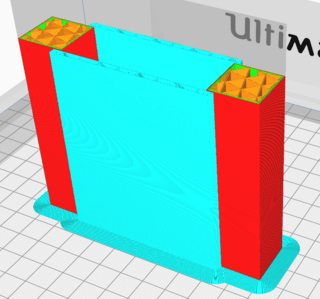 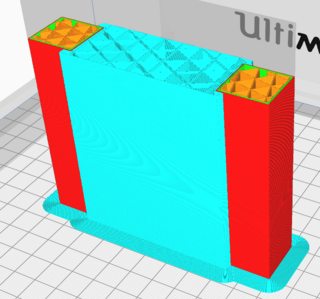 What is the reason for the external scaffolding, and how does it help support the internal overhang, which now has no internal support at all?

To answer the scaffolding part of your question, that can only be explained by being the decision of the developers. There must be very good reasons for doing it like this as a similar support structure is generated in other slicers, e.g. Slic3r (actually this is caused by a slicer setting, see this answer explaining why the scaffolding is caused). Some slicers do have options to change the support type, e.g. Slic3r has the option pillars, which creates pillars without external scaffolding: 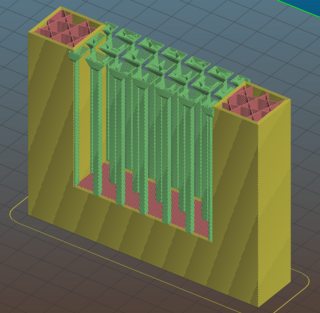 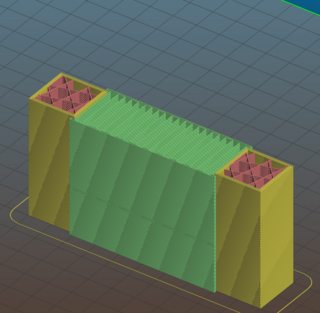 Is the behaviour I expected possible, advisable or configurable in Cura? If so, what options should I be looking at, if not is there other software that does support this?

Playing with the settings to reduce the amount of PVA as suggested in the comments by enabling the type of extruder for specific parts of the extruder I was able to create a solution without scaffolding. This solution only uses PVA for the bottom and top layer of the support structure. 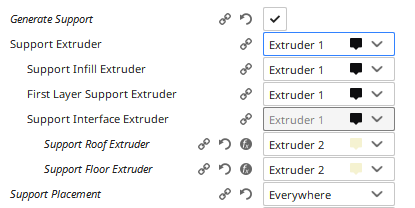 The shown settings1) produce a support structure with PVA top and bottom layers: 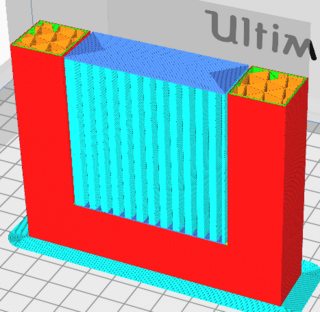 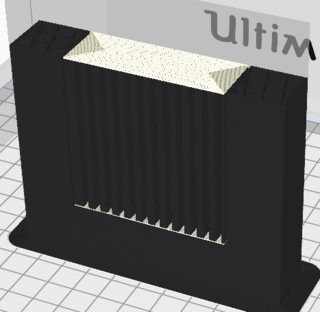 Where the latter image is in material color; black PLA and natural colored PVA

1) It might be worth mentioning that by default, the Support section doesn't show the Support interface extruder options and you have to go into Preferences and check the Setting Visibility option for those to appear.

What is the reason for the external scaffolding...?

Reading through the Ultimaker support page, I discovered that there is a Support horizontal expansion option in the Support section of the Custom Profile.

This appears to default to 0 mm for PLA, but defaults to 3 mm for PVA, which explains the difference in slicing behaviour.

If I set Support horizontal expansion to 0 mm, then I get the support I originally expected:

Ultimately though, the solution proposed by Trish and detailed in Oscar's answer using PVA just at the interfaces would be a much better solution, given the cost of PVA.

Not the answer you're looking for? Browse other questions tagged ultimaker-cura pla slicing pva ultimaker-3 or ask your own question.

3
Supports for dense Voronoi pieces
6
Easy way to refine a 3D-model for 3D printing by removing internal geometry
1
Ultimaker Cura problems with build platform size and overhang support
3
PVA support with small tolerances
3
Technique for removing support from Ultimaker 2+?
2
Cura is printing support on nothing?
3
Can PETG be used as support material for PLA?
2
Overhang Question
2
How do I fix infill support in Cura?