I realized while playing around with 3D printed gears that it would be easy to make a 3D printed herringbone-style timing belt and matching gears/pulleys. Would such a design have any advantages over typical GT2 timing belts used in 3D printers? I figure the belt contact around the gear/pulley is sufficient that it doesn't make a big difference to smooth transfer of force like it does with meshing gears, but it would prevent lateral movement of the belt. Are there other advantages (or disadvantages)? I would assume it's harder to produce the belt with conventional manufacturing techniques, but of course it's easy to produce with a 3D printer and TPU or other flexible material.

At a nearly microscopic level, the herringbone belt/gear combination will reduce the whoosh effect of a square profile cogged belt forcing itself into a matching profile pulley. Consider a well-sealed drawer or similar shape. Push it into the cabinet at maximum speed and force and the air is going to have a difficult time exiting.

By the design of the herringbone belt, the teeth on the belt are eased into the groove in what amounts to a diagonal motion. This permits the air to be exhausted in a less-abrupt manner.

This is part of the concept of Goodyear Eagle belt systems.

Part of the sales pitch is quiet, another part is precision, which I expect falls into the self-centering aspect of the design. Yet another described characteristic is reduced vibration, certainly valuable in the 3D printer world.

I've had no luck getting email communications from the manufacturers regarding this type of drive system, but found that commercially available belts and pulleys do not go below a rather large diameter, making that aspect unsuitable for 3D printing. The belts are also high-load capable, very stiff and also quite wide.

You would not want to use TPU or other flexible filament (perhaps obc?)* unless you could be assured of minimal stretch. Any stretching of the belt would inject too many problems into the printer to compensate in practical terms. 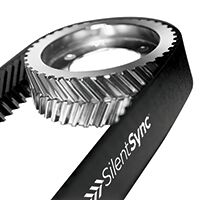 OBC (Olefin Block Copolymer) 3D printing filament from Dow Chemical is a breakthrough material that is both flexible when printed thin and rigid when printed.

As an anecdote, I desired to replace the x-axis belt on my laser cutter with a Silent Sync system. It is believed on at least one laser-cutter forum that the GT style belts cause oscillation which appears when engraving. I had hoped to discover that the Silent Sync belts and pulleys would solve this problem, but the lack of communications with the manufacturer threw a wrench in the works. It's unlikely that I can 3D print a 2.5 meter long segment of belt, as I don't own a White Knight printer, but it's interesting to think that OBC filament might do the job well enough. Too much experimentation, however.

Not the answer you're looking for? Browse other questions tagged printer-building mechanics belt or ask your own question.