I have just started with the FlashForge Creator Pro using the FlashPrint slicer software. I have gotten some nice prints but I am having an issue with a certain print from this model of a knife. 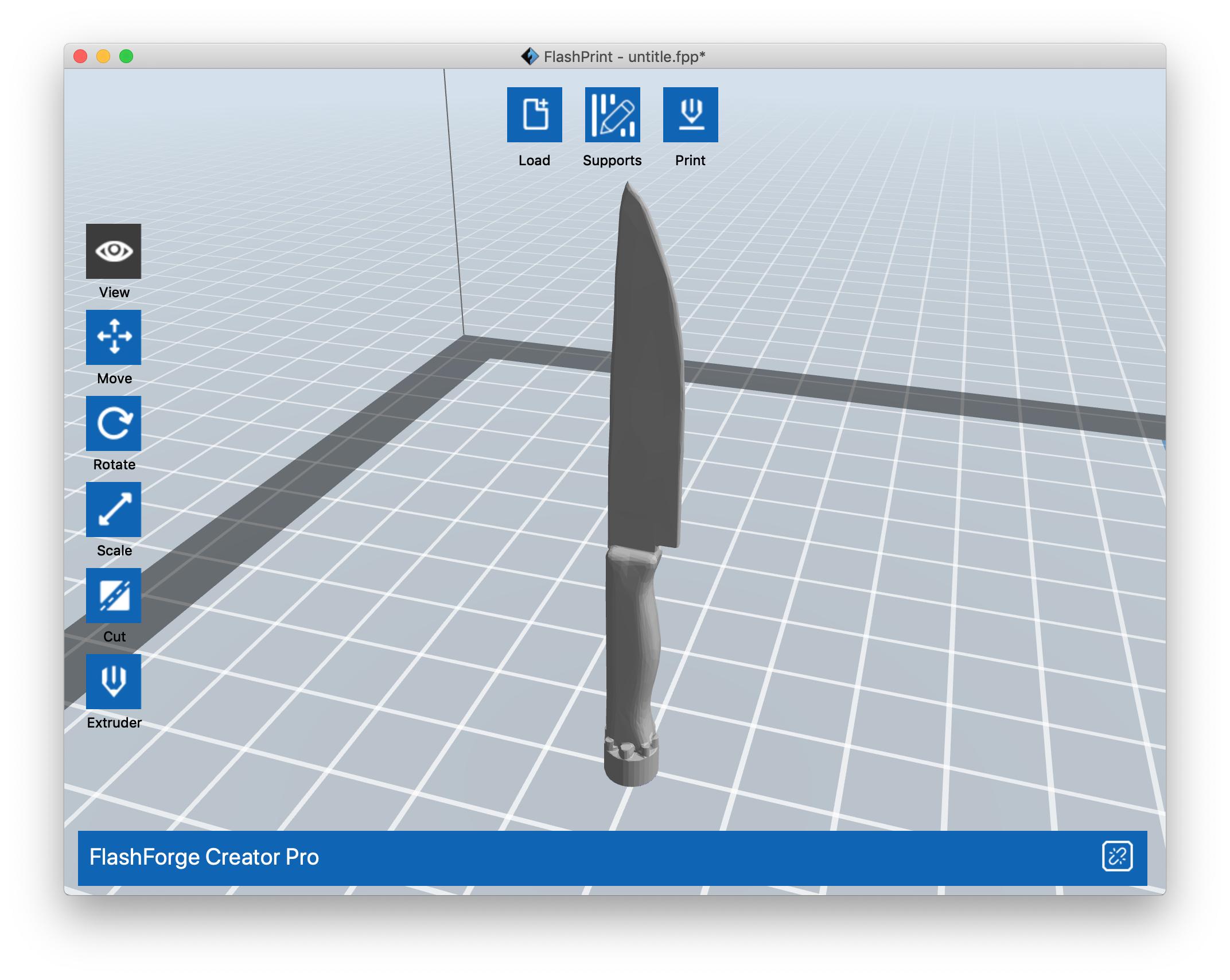 Everything prints fine up to where the blade starts. As you can see, there is horizontal portion of the blade that juts out and, as I predicted, when it tries to print this, there is nothing for it to adhere to so it hangs there and when the extruder moves, it just pulls the filament around with it and creates a mess.

The object file from Thingiverse is designed that way (with it standing upright) and there are pictures on the Thingiverse page of a successfully printed knife. As I am new to this, I am wracking my brain trying to figure out how to print this.

Any help or any pointers in the right direction would be greatly appreciated. Thanks!

You'll notice in the screen capture that there is an icon marked "supports." This is precisely the solution required. When selected, the software should construct a series of vertical pillars in the locations required to properly print the horizontal portion of the knife blade.

It's common for Thingiverse models to have a notation Supports (yes/no) to indicate that this feature should be activated. Depending on the capability of your printer, some angles may require supports that are not required on someone else's printer model. There may also be an adjustment for angle reference to cease supports or to require. My printer will handle up to a 50° from vertical without support. Beyond that, more filament is used, but the result is superior to printing without it, as you've discovered.

Note also that support is typically categorized as "from the bed only" or "everywhere." The former prevents support from being generated between vertically separated parts of the model, while the latter permits it. Some models may have, for example, a foot on the bed not requiring support, but the arm directly above the foot does. "From the bed only" means the arm would droop/fail as no support would be generated above that portion of the model.

If you are using the ReplicatorG 0400 software, referenced from the manufacturer's web site, page 11 of the manual will have additional information regarding support within the program.

Not the answer you're looking for? Browse other questions tagged troubleshooting support-structures flashforge-creator flashprint or ask your own question.

4
How to correctly print an object with supports
1
Ultimaker Cura problems with build platform size and overhang support
2
Extruder_2 Stepper Motor does not work
3
What causes this “stringing” and can my print recover from this?
1
Odd dotting when printing a line
0
3D printing extruder not warming up
0
Pretty ugly surface remains after using support ramp. Are my slicer settings correct?