In Fusion360, how do I align components according to their a midplane?

In Fusion360, how do I align components according to their a midplane?

I have 2 complex objects. They have no midpoint defined (is that even possible). How do I align them according to their mid points?

There are several ways to lock items together.

When you design the parts from the base up, you should lock the very first sketch to the origin in some way or another. Fusion shows this by making any "well defined" line as black in contrast to blue, like shown here: 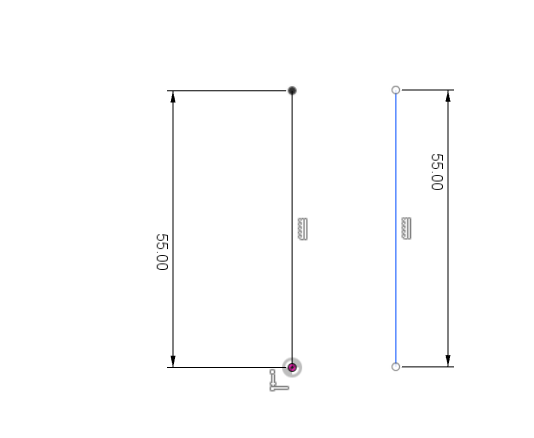 Once you have bodies, you can pretty much move them around in the timeflow. You then can start to define them as components. Let's assume we have these parts, a bolt, and a part into which it hinges. Of course, these two are modeled "in place" but that hasn't to be: 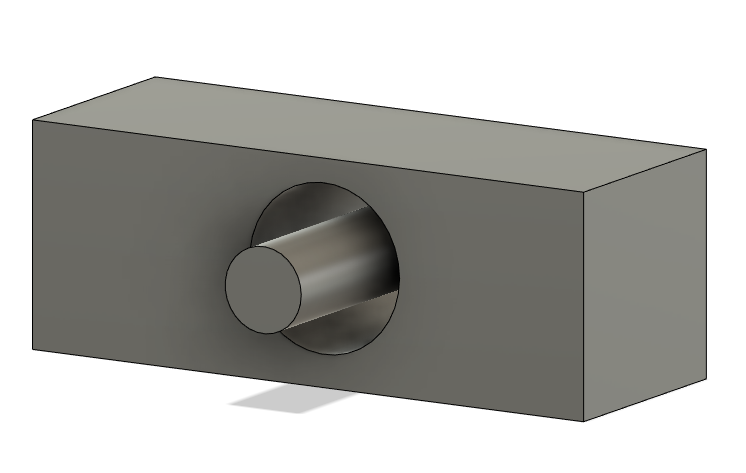 Now, we want to lock them together... well, first, let's start and put them into components! Highlight one, then choose the "new component" command, and make sure it stays highlighted, from bodies is chosen then hit enter.

Repeat for the other part, so your tree should show 2 components now.

Now we want to combine them as modeled, right? Ok, let's do that, it's easy! get out the dropdown from the combine menu and press combine as modeled (Ctrl + J) 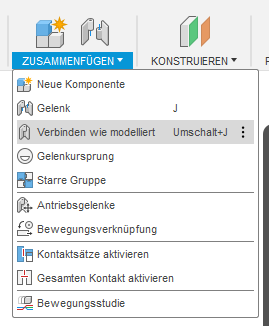 Now, click both components and at first it will start to shake the screen, having chosen "Stiff" combination. This means the parts don't shift one against the other. If you had them in the right position in the first place, they will stay that way. But there are other ways, which are in the menu that popped up: 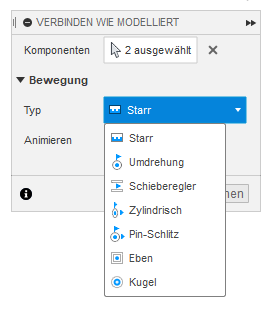 If for example, I choose "rotation", I can choose a rotation center by placing a node as seen here: 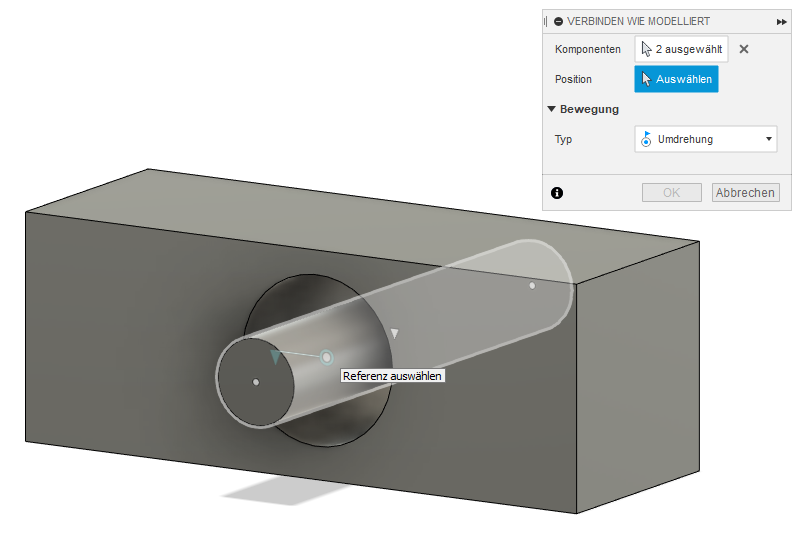 Now, what if the components are not in position like the bolt is in the wrong position entirely? Well, start with components, as shown above, then we'll see: 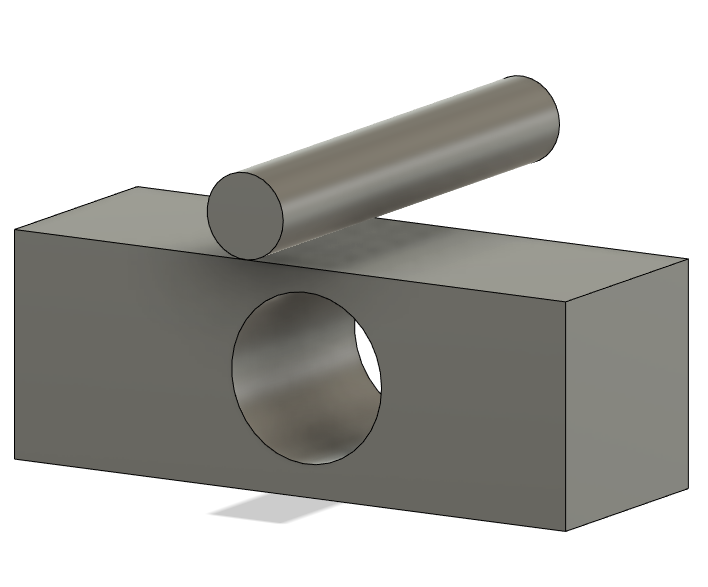 Now, we should use the joint function: 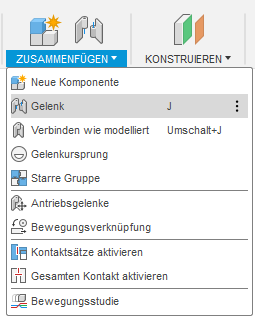 Choose the first Component, then seek the point which face-position (or for cylinders: position on centerline) shall be the first component's joint-point shall be. For our part, let's take the big part's hole. Click the face, then choose one of the available points. For cylinders that's the ends and the center, for faces, it's the corners, center points of the edges and the center. If you hit the possible alignment points in the first place, it skips the second click to choose it. Once that is done, the body turns transparent. 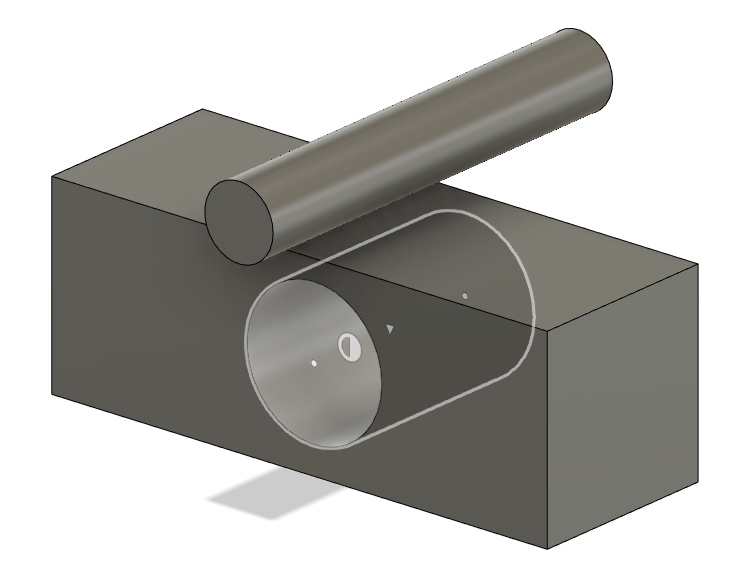 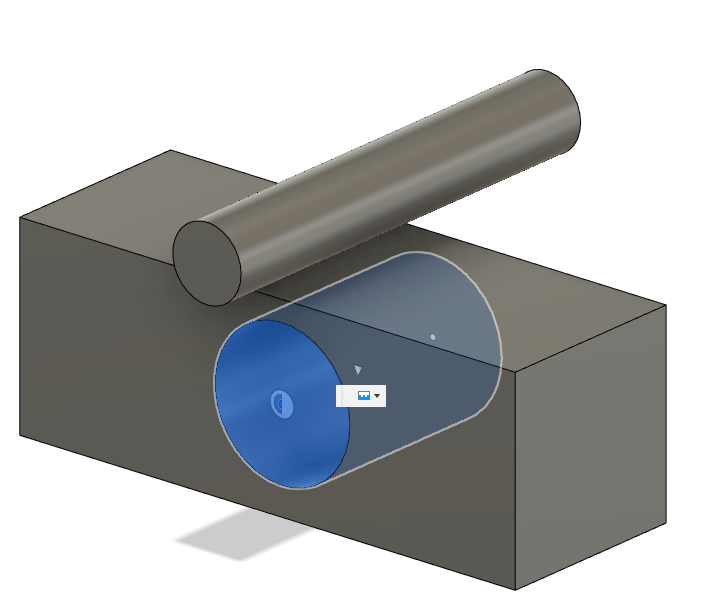 Repeat the same process for part 2 and the magic starts: Both parts suddenly move till the alignment points are in the same position, the screen shakes and BAM! We are at stiff joint again! The menu changes and we can start to define offsets! 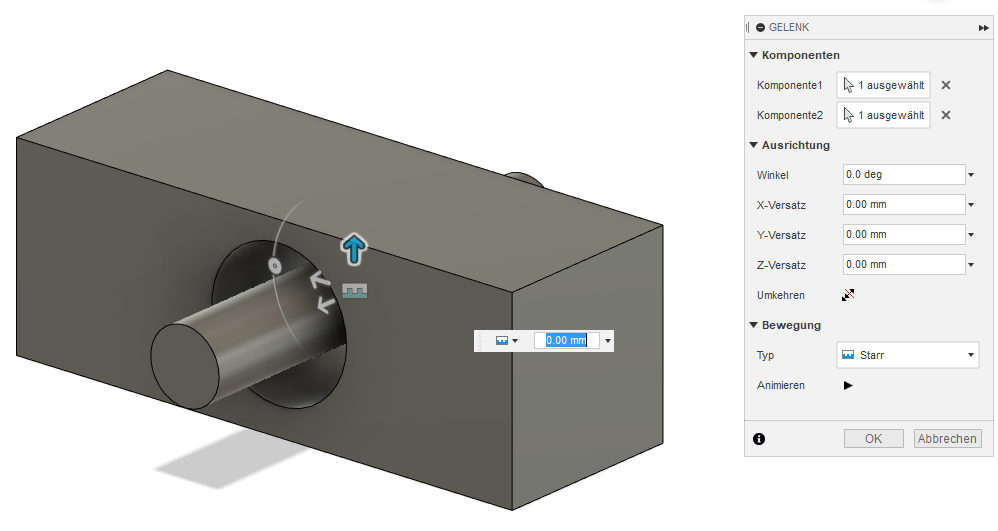 Not the answer you're looking for? Browse other questions tagged 3d-design fusion360 or ask your own question.

17
Tips for making parts that push/snap together
7
How to add internal supports/localized infill, preferably in Cura?
3
Print circle arcs without supports
4
3D Builder is Saying “One or more objects is invalidly defined”
2
Connecting disconnected pieces in Fusion360 Stencil. Sketch entire model then extrude
5
FreeCAD to design moving parts
2
How to align sketch with the x-axis
3
How to design gears
2
Creating a two part label for storage boxes
1
Fusion 360 Design Best Practices Question (Am I on the right track?)