I'm trying to increase adhesion of the first layer (as well as to fill gaps for a more even surface) by squeezing more material against the bed. The obvious way of doing that in Cura is by increasing the "Initial Layer Flow", i.e. to make the printer push out slightly more material than it normally would.

But then there is also a setting called "Initial Layer Width" and according to the the Cura Settings Guide (see image below), increasing line width will make the nozzle

extrude more material and that material has to flow wider outward. This causes the nozzle to press the material harder on the build plate (...) Not only will the lines be wider ... but they will also be farther apart ... by the same factor, so it would not produce overextrusion

This seems to imply that increasing the initial layer width will automatically also increase initial layer flow. If this is so, the question is: which setting is applied first?

In any case, it seems that the two settings should not be applied together, if they manipulate the same variable (but I have not seen this recommendation anywhere). Which leads me to my may question: what is the difference between the two settings? More specifically (based on my above reasoning): what else does "Initial Layer Width" manipulate, apart from the flow rate in the first layer? Just the distance between the lines so that increasing the setting will lead to fewer lines? 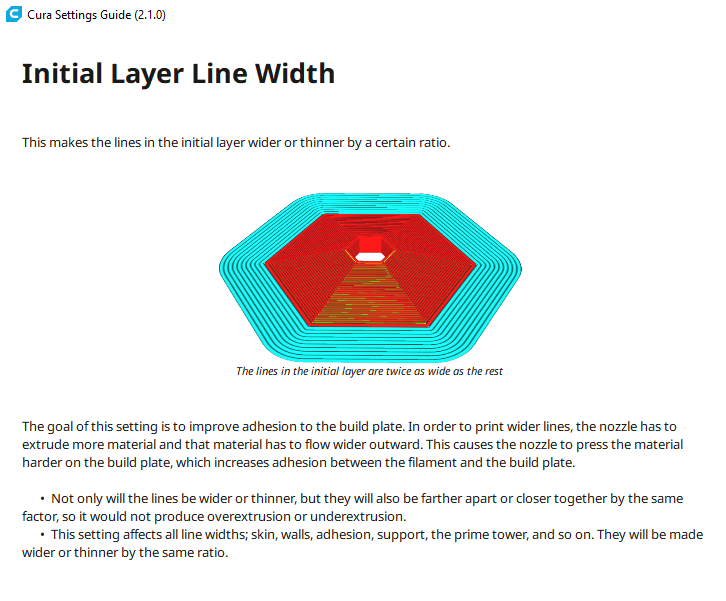 Cura option Initial Layer Width will cause lines to be further apart or closer together, based on the value you set with respect to the default. The required filament flow to produce these lines is calculated based on the width of the line and the overlap between lines (and layer height).

The Cura option Initial Layer Flow adjusts flow for the current line width with a multiplier, this means that the distance between lines stays the same. I.e. with this parameter you can overextrude to push more material to the build plate. Note that for a well calibrated machine this is not necessary. My printers use the paper method to determine the initial Z=0 for levelling and never use a wider initial line width or overextrusion of the first layer to get perfect filled mirror finish first layers on glass. However, if (paper) tape is used, the bed may be less flat and overextrusion might be beneficial for better adhesion.

The options can be used together, the multiplier will act upon the calculated flow.

The typical consensus is that you increase the layer flow initially for better adhesion, though from my experience I decrease it!
My first layer is printed at between 70-75 % layer flow, this gives the best adhesion and best visuals when printing with ASA or ABS.
From layer 2 on I've 105 % layer flow.

The reason is that my first layer is printed "officially" at 0.27mm but in reality, it's more like 0.05 mm thickness. That's manually finetuned while printing after a material change, basically, the thickness is adjusted for perfect grip on the build plate.
When left at 100 % flow rate this will cause ripples or waves on the bottom, it's excess material that builds up along the printed lines.
At 70 % the wrong initial distance is compensated (visually) while maintaining perfect adhesion.

Conclusion: Fine-tune your printer and settings for each material used, a general answer is not possible. Especially true for difficult materials like ABS, ASS, or Nylon.
The best is to watch the printer while it is printing and adapt the mechanical properties first, then fine tuning the flow rates.