I understand that this is probably more of an electronics question, but was hoping that someone with experience of using an Anet A6 in the UK (or a country outside of the US/China) may be able to help... or alternatively, someone knowledgeable in electronics!

I recently bought and assembled an Anet A6. I am based in the UK. On the power supply transformer of the Anet A6, there is a switch that allows you to select the input voltage from the mains. There are two options, 100 V or 220 V.

When I turn my Anet A6 printer on, nothing happens... I have triple checked all connections and there doesn't seem to be anything wrongly connected or loose.

I am wondering if the reason it is not working is because in the UK we use a different mains voltage 230 V (I think) and a different frequency 50 Hz (I think) to the US and China (which I assume the printer was built to accommodate)?... I am not 100 % sure on this, just a guess, I am far from an electronics expert.

I don't have a multimeter to test if there is voltage flowing (not that I would even know how to test it lol). Is it likely that this difference between voltage/freq is the reason that it is not working? If so, is there anyway to fix this? I would prefer to buy something (some sort of converter) than tinker with the electronics, as I have no experience in electronics and live in a rented flat, which I really don't want to burn down (not that I would if i owned it).

Any help is massively appreciated, thanks in advance!

I have done what @Oscar suggested and also bought a multimeter to test the circuitry. I plugged my Anet A6 into the mains power supply and turned it on, but still nothing happens... the LED doesn't light up, not does the LCD screen turn on.

I tested the voltage of the power supply whilst it was turned on across connections 6 and 8 in the video below (taken from the assembly instructions video, 12 mins 46 seconds):

The 6 and 8 connections correspond to the output from the transformer (ie the connections that would be connected to the mainboard). There was no voltage reading at all when I measured it here with the multimeter. Does this indicate that there is a problem with the transformer/power supply, or is this expected? Or am I testing in the wrong place and there is a better place to test when the printer is on to determine what the problem might be?

The UK uses 230 V mains voltage. The 220 V designation is from the past, Europe is now using 230 V. You do not have to worry about the frequency.

You should place the switch to 220 V and plug the cord into the socket. The printer should start immediately booting (cycling) the printer firmware, the LCD should light up and the cold end cooling fan will spin (annoyingly).

If nothing happens, you need to check the Power Supply Unit (PSU) and all cables for proper connection (does the fan of the PSU spin if it has one, you should at least see a led light up). A multimeter is not expensive and generally very valuable to test if it outputs 12 V. That way you know the PSU is working or not, if it works the problem is at the main printer board.

As these PSU's are pretty cheap and faulty, you could well have received a broken one.

How to measure the voltage?

If you look at the connection terminals you will find labels above them. Measuring position 6 and 8 might be the incorrect ones, this depends on your PSU. If you have exactly the same PSU as from the linked video, measuring between 6 and 8 would be correct: 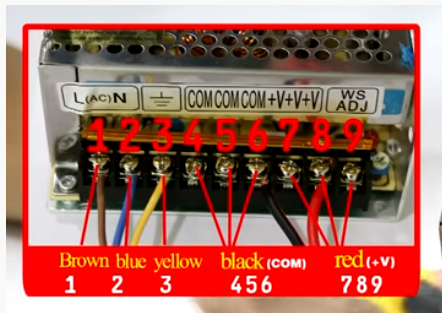 From the image above the connections from left to right (for other PSU units, the order may be different, I have units where the connection to the mains is on the right):

If the PSU is correctly wired, your fuse is not broken, does not have a LED lighted and the voltage is zero the unit is defective.

@Oscar was correct, so long as the switch is set at 220 V, the printer will turn on. I am adding this answer to help anyone else who has a similar problem.

I strongly recommend that you buy a multimeter if you have any power supply issues, as this helped me to figure out what was wrong.

There were three issues that needed to be rectified before my printer would turn on. The first was that I had bought a fairly cheap EU to UK plug converter from my local supermarket. This was mistake number one, as the quality was low and there was no ground pin for the power supply (which is dangerous). I plugged the EU plug into my converter, and then the converter into the UK mains socket, and it would not turn on. By using my multimeter I was able to figure out that the converter was a piece of rubbish. With the plug still plugged into the converter, but the converter removed from the mains, I touched my multimeter cable, whilst in continuity mode, on one of the three pins on the UK side of the converter (the bit that goes into the wall), and the other cable onto one of the terminals that I had connected the power cable to the power supply with. I touched each terminal in sequence to see if it was electrically connected to the pin on the converter. I repeated this in sequence and identified that the live pin on the converter was not connected, and so no current could flow when plugged into mains. I immediately defenestrated the converter. Here is the replacement that I bought:

The next issue was that the power supply cable was wired up incorrectly (or at least unintuitively). In continuity mode again, I touched one multimeter cable to one pin on the EU plug of my power supply, and the other to one of the terminals (which were connected to the wiring of my power cable.) I discovered that the live and neutral wires of the power cable were wired the wrong way round on the plug (in order for it to be used in a UK converter, not sure what the wiring convention is on mainland EU). In the UK, the right hole in the mains socket is live, the left is neutral, and the top one is ground. On the EU plug I had been provided with, the left pin was live and the right pin was neutral. If I were to plug this in to the new converter in the normal orientation (cable coming out the bottom side), the live and neutral would have been connected incorrectly (plug-live -> converter-neutral, plug-neutral -> converter-live). Hence, in order for the pins to be situated correctly in the converter, and subsequently in the mains socket, the EU plug had to be plugged into the converter upside down (plug-live -> converter-live, plug-neutral -> converter-neutral).

Hopefully this helps save someone some frustration and time!

Not the answer you're looking for? Browse other questions tagged anet-a8 printer-building anet-a6 power-supply or ask your own question.

1
Connecting an inductive sensor to the Anet A8
7
Anet A6 - First time assembled, won't turn on
3
Geeetech GT2560: Electronic safety and power source
6
First time assemble of Anet A6 printer. Only fan works
4
Why did my power supply fuse blew out on my Anet A8?
2
Anet A6 stock power wires.. the live, the zero and the ground. Which is which
3
Will this MOSFET allow the heat bed to run at a different voltage than the control board
5
Power OctoPi from printer
2
Power supply not working