I got an Anycubic Predator last month, and after resolving a few mechanical problems, I was able to get it printing decently well. The only significant modification I've made so far is a set of 8-diode TL Smoothers, and I'm now mostly operating it via Octoprint.

However, during the last few prints, I've noticed the temperature dropping midway through the print. It warms up and cools down fine, but for some reason it's not able to sustain the temperature throughout the print. 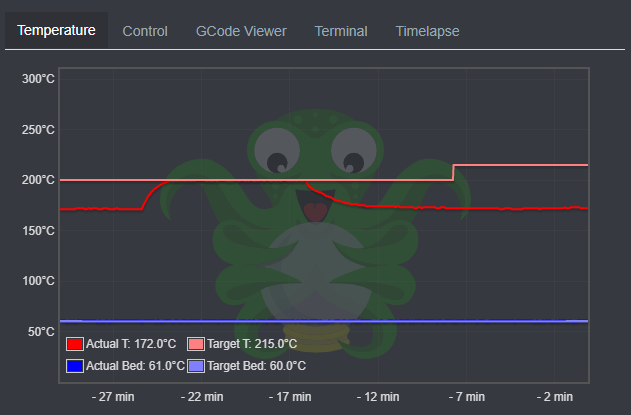 In this case, the print started out at the correct temperature (200 °C), held that temp for around 2 hours, then it dropped to a lower temp (174 °C). It eventually went back up to the target temp, then dropped again 5 minutes later. I tried manually adjusting it to see if that could fix it, but no luck.

After this print completed, I restarted it to show how it is easily able to reach the target temp and hold it at the start of the print: 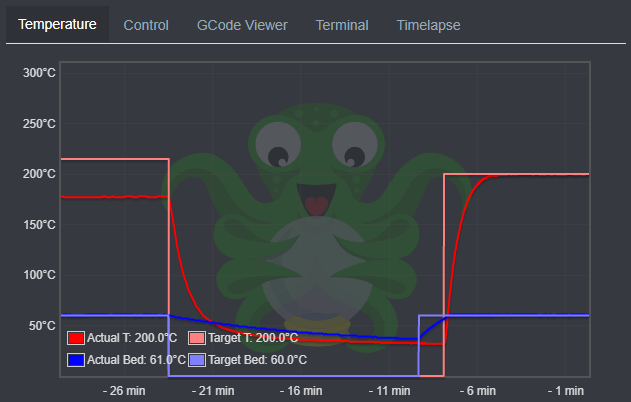 Any tips on diagnosing and resolving this issue?

Let's look at the graphs. First: you should swap firmware for one that has Thermal Runaway, as, as it is, running about 15 minutes with 28 K less than the printer is ordered to work at is a clear indication that there is no Thermal runaway protection in place - it should have tripped over that long ago! But there is more!

But this graph and the lack of Thermal Runaway Protection also are typical for printers that have a design flaw: If the airflow from the part cooling fans or the coldend-cooling fan (that's the fan that always runs) brushes over the heater block, it cools it. This limits the achievable temperature.

Luckily, such is easily remedied in one of several ways:

The rise times are quicker than the fall times, which is not what I expected. Maybe a fan is turning on and off, but I'd expect to see the heater struggling to heat up. On both graphs, the rise times look like good heating and not much interference.

It seems to me that power to the hotend is the problem, but what can cause a drop in power but not to zero (as in the first graph)? Assuming that the file and the software are OK, then it's hardware: the MOSFET and the subsequent tracks and connections become the most likely suspects. So, I'd check all the connections between hotend and control board, even undoing and reconnecting. If you have a logging voltmeter, you could try that to see if the heater voltage changes when it shouldn't. If you have an oscilloscope, see the input pulses into the MOSFET to see if changes happen at the same time you see something weird with temperatures. MOSFETs can fail in peculiar ways, so consider replacement - it's not the cost of the MOSFET that's the issue; it's all the fiddling around to actually do it.

Not the answer you're looking for? Browse other questions tagged troubleshooting hotend thermistor anycubic-predator .