Is there an engineering/physics foundation for application of airbrush nozzles?

Lately I noticed that there is a new type of nozzles (called airbrush nozzles?!?) available; typically found on those online overseas vendor sites. The nozzles are advertised for usage in E3D hardware, but are not found amongst the E3D genuine nozzles. 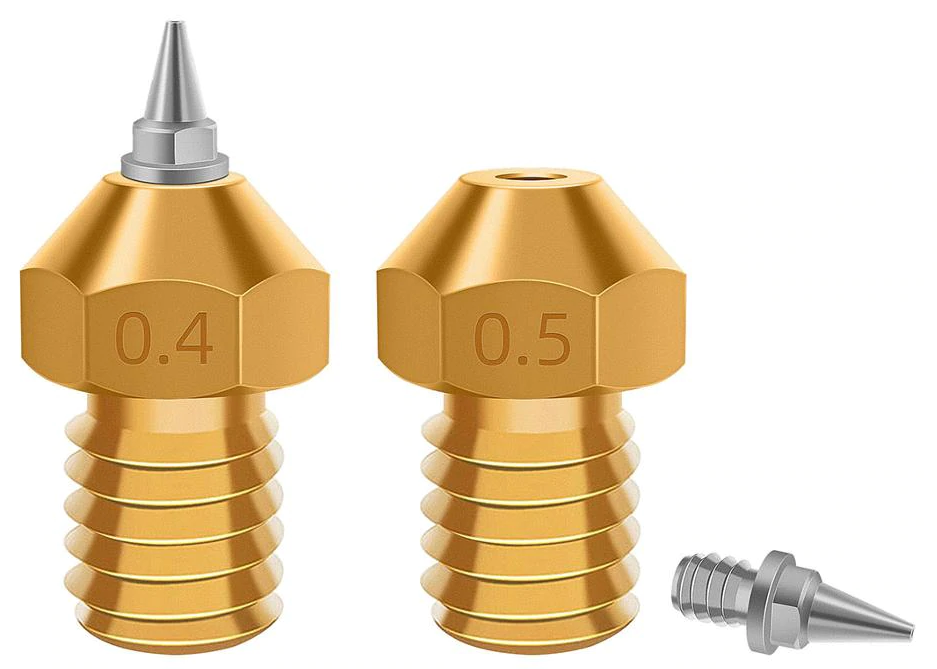 What are the basic physics principles or what is the engineering relevance for application of airbrush nozzles? (Gimmick or actual product improvement?)

An obvious drawback is the lack of a flat surface around the opening, resulting in a severe limitation of the extrusion width to exactly the nozzle width (plus some percent). This nozzle cannot efficiently push the filament against the nearby perimeters because it cannot constrain its height and it cannot flatten the top of the already extruded one. So layer adhesion may not be a big problem, but perimeter-to-perimeter likely is.

Also, the thinner wall and extended length will reduce the filament temperature, however I don't know whether a simple compensation would do, since cooling will depend on filament speed and travel speed.

Regarding the cooling, you can check also the original designer's goal:

A big problem with small. hot and slow prints is the heat radiation of the hotend and nozzle itself. To get as little as possible heat into the print, the nozzle needs to be as long and pointy as possible. The longer the nozzle, the bigger the distance between heater block and the print. And the more pointy it is, the less heat radiation can affect the print. A nice side benefit: the cooling fan can blow better onto the print and "around" the nozzle.

They are used for nonplaner 3d printing.

The gist of it is, that You can achieve smoother, curvy top layers that are more true to form, buy using a nozzle like the one you mentioned. Also, they can be used to print multiple objects at the same time, where is faster to print 10 to 20 layers of one object then switch to the next object on the build plate, rather than having to print each layer of each object sequentially. This reduces build time, stringing, voids and the potential knocking off the part by the nozzle (as it moves to print the next object, since that object may have shrunk/expanded since the nozzle last visited it).

Not the answer you're looking for? Browse other questions tagged nozzle .

8
Are Makerbot Smart Extruder nozzles swappable?
6
Should I use different nozzles for different materials?
8
Is there any reason *not* to use a steel nozzle for printing all materials?
9
Wear resistant nozzles
3
Are there multi-filament hardened nozzles or equivalent systems?
1
Is there any reason not to clean nozzles with fire?
2
Is there lead in brass 3D printer nozzles?
0
Cheap nozzles bought from China
2
Are there any nozzles shorter than volcano but longer than MK8?