Can model used for 3D printing be later used for mold mass production?

I am working on a project that requires an enclosure that I am thinking to prototype using a 3D printer (which is pretty easy and overall awesome).

My question is simply whether this same model can be used later on for mass production (i.e. mold injection)? What adjustment (if any) need to be done to model between prototype and mass.prod. stages? What areas in design to look out for that can make model viable for 3D printing non-viable for mass production?

There is a whole world of casting, so I will describe, as an example, a very simple process that will make a replica of your 3D printed part. I will briefly address the steps necessary for making multiple copies at the end of my answer. First you need to add a cylindrical extension to the shape that will create a sprue. See the two models shown in the image below. Next make a foil cup a little larger than your 3D printed part and place your part in the cup, suspended by the sprue. Pour liquid plaster of Paris (POP) into the cup, covering the 3D printed part, with just the top of the sprue sticking out. Once the POP has hardened, you can remove the 3D printed part by dissolving it in an organic solvent (acetone for acrylic) or by heating the part to several hundred degrees C so it will burn out (convert to gasses). You will now have a block of POP with a void shaped like your 3D printed part plus a cylindrical hole to the outside that acts as a sprue. Once you have heated the POP to drive out any remaining water, you're ready to cast. Fill the void (via the sprue hole) with, for example, copper powder and heat it to well above its melting point. Once everything has cooled, lightly tap the POP with a small hammer or equivalent, to remove it, leaving your final part plus the sprue. You can remove any remaining POP with some warm baking soda and patience. The final step is to cut or saw off the sprue shape.

Please understand that the process described above is just to give you a basic idea of the process. There are many alternate or additional steps that may produce a better final product. Also, the process described should work of the rook model shown on the left of the image below, but not the model on the right, which has a small hole through the middle. There are ways to solve that issue, but as I said before, there is a whole world of this stuff.

Casting is a way to create parts out of materials that you otherwise could not 3D print directly (on a home budget). For mass production, you would need to start with an inverse of the final shape. For example, a cylindrical slug with a rook-shaped void. Then you would use the investment casting process to create a mold out of a rigid material that you could use to, for example, create rubber copies of the original part that could, in turn, be used as the "wax" for copies in the final material.

I urge you to experiment, maybe following one of the tutorials on YouTube. Good luck. 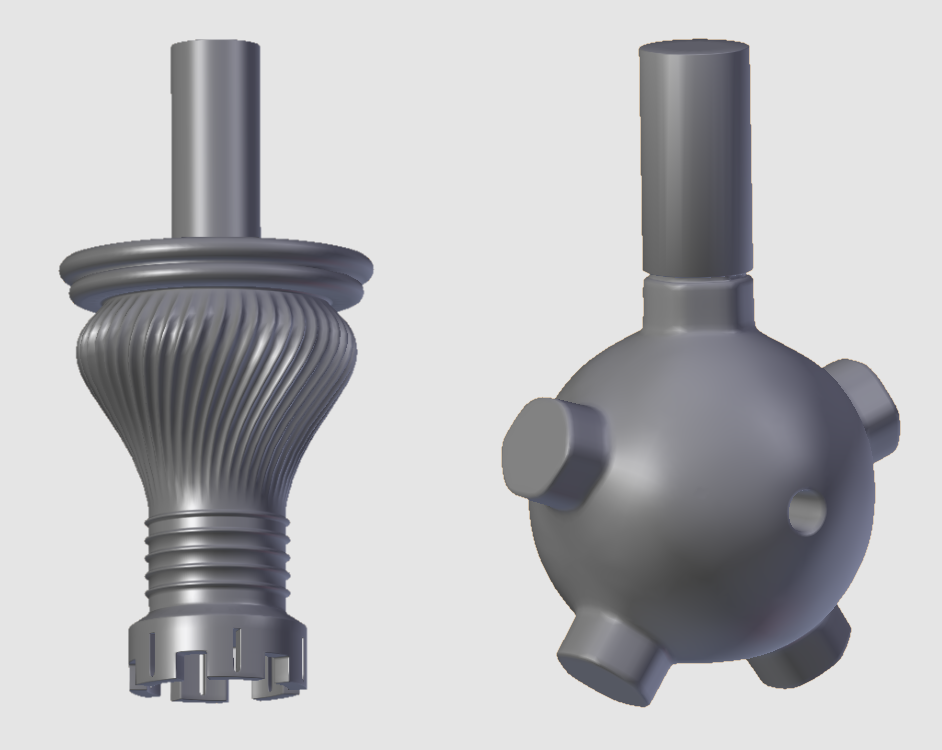 That's a hard No.

Models used in industrial injection molding are very specific to the process sometimes even the machine. When they build those molds they have to include constructs like spurs and runners; things to get the molten plastic to where it needs to go. Further the wall thickness of an injection molded part can only be so thick, because the plastic will contract when cooled, which will distort the final part if it is too thick.

Not the answer you're looking for? Browse other questions tagged 3d-models 3d-design .

1
How to split a model in SketchUp for printing
8
Take a detailed model and make it suitable for 3D printing?
7
How can I make this rounded enclosure feasible to print?
1
How can I make this model?
4
Can the glTF format be used for 3D printing?
2
Can a model change size when using a different filament type?
1
Pile up objects and attach them for mass 3D printing
1
Can 3D printer models be used in video game engines and vs versa?
1
How to create a 3D model as mold for a 4-legged animal with parallel legs