What is the easiest way to modify/resize an object inside a STL file?

I have this GoPro mount for a quadcopter as STL file. It looks as follows. 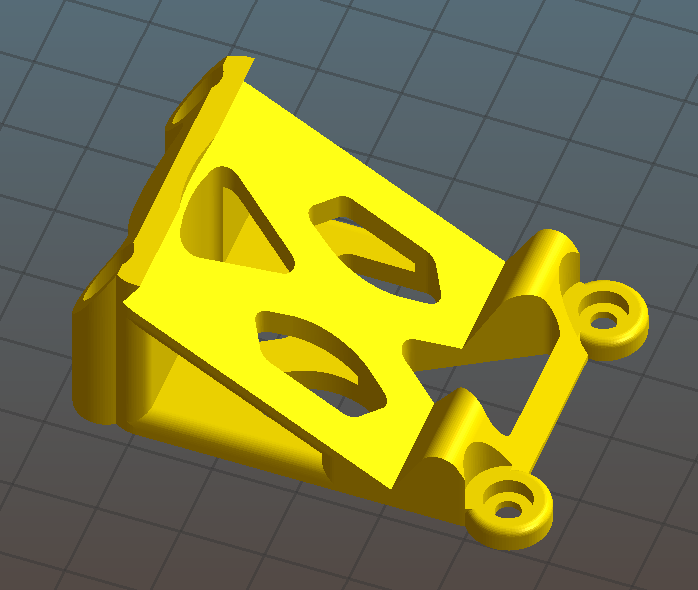 How do I modify it so that it is wider and longer by a few millimeters but the screw holes stay the exact same size? Additionally the angle of the upper surface must stay the same. Please suggest the easiest solution for someone like me who as no idea about CAD software.

The perfect solution for me would be to just import it in Tinkercad and then modify it however I have no idea what the steps are.

Many resources are available for modification using 3D CAD (including learning a tool such as sketchup, which is VERY beginner friendly). The easiest and fastest solution to your particular problem may be the reddit community "3D Print My Thing" which was created for EXACTLY this type of situation (help with modelling parts which will be 3D printed.) Another potential useful reddit community is "3D Modelling" which will have many people who are able to help you with this quadcopter/Go-Pro attachment 3D model.

Third solution: Thingiverse has a customize option for 3D models (including this one). have you explored using this interface to edit the model? This is most likely the easiest DIY solution.

Unfortunately, there is no simple method for modifying specific features of an STL. You are pretty much limited to the following actions:

I think what you are trying to do is somewhat non-trivial so whatever tool you choose there will be some learning curve.

OpenSCAD, as mentioned above, is pretty well established as an open source tool for modifying STLs; however you have to be comfortable writing programmatic CAD instead of using GUI tools. Personally, I think programmatic CAD is MUCH easier but I realize not everyone feels that way. FWIW, I would probably break this into three STLs using a DIFFERENCE method, stretch the outer ones using a SCALE method, then use a UNION to put them back together.

The one problem that I've had with OpenSCAD is that it will frequently crash unexpectedly or run incredibly slowly when dealing with an STL with a large number of triangles.

AtomicCompiler.com is very similar to OpenSCAD but runs as a web service and seems to do a bit better when dealing with large STLs. I might try that first, as it doesn't require a download or even a login.

Well. I would cut it into two STLs, using netfabb slice / split tool.

in 123d I would fill in the hole with the merge union (with a cylinder object), scale it, and either keep it unfilled and drill it, or do a subtraction union on where you want the holes. (again with a cylinder)

Scaling otherwise you need the original model and solidworks..

Split in 2, scale the piece you want and re-add the other half is probably the best way.

I would suggest using Blender for this purpose. It has excellent selection tools, you can undo/redo selection and obviously you can resize any portion without affecting the others. However, you may need to learn Blender to an intermediate level to be able to effectively do that.

By far the easiest program to use is Tinkercad and it's free.

Not the answer you're looking for? Browse other questions tagged 3d-design software 3d-models .

3
How to create a very accurate STL file as well as the slices for a 3D printer?
4
What setting do I need to change to get rid of this gap between the shells and the inside?
7
Generating mold from stl file of the 3D drawing of the object
2
What is the simplest way to render an image of an obj exported from Tinkercad?
3
How can I decrease the thickness of a wall in an STL file?
2
What is the correct way to export SVG in order to convert to STL?
2
Any way to print all the layers of a 3D (STL)?