When I export my SketchUp STL model to Cura it looks good in solid mode but in the layers mode some holes are filled up. To find the reason why, I broke down the original model by deleting the parts that come out ok, and ended up with a block 50x100 mm with a hole 30x20 mm in it. This simple stucture looks manifold, no double lines etc, and does not have red parts in Cura xray.

Cura shows the model as expected, but in layers mode the hole is filled up. I spent many hours to find out, but so far my only solution is to start over again drawing a complete new model and even then this happens again.

What goes wrong here? How can I repair this with Meshlab? 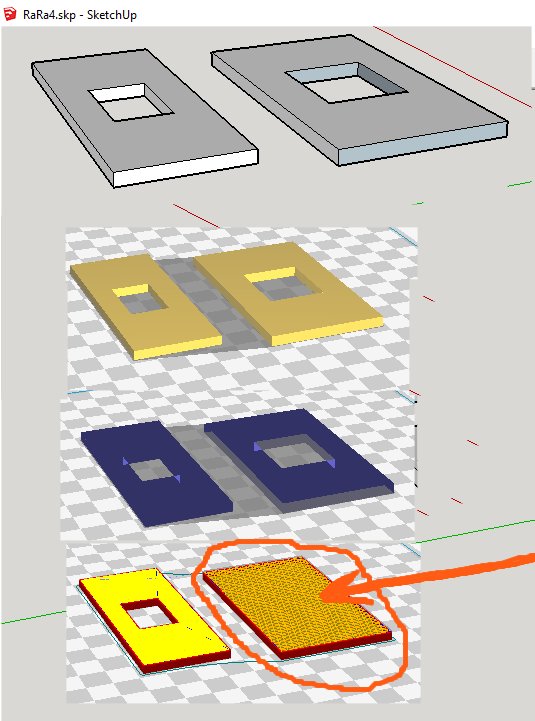 SketchUp does not always create STLs in ways that are closed, watertight manifolds - a block with a bore is, if created as a block first and then bored out, actually 2 surfaces if made with SketchUp:

The two surfaces are not connected. As a result, Cura sees two non-manifolds and tries to fix each of them - the cylinder with the normals facing inside is considered an artifact that can't be fixed, the holes in the block are stitched and thus turned into a solid block.

To repair the issue, you could load the item into for example MeshMixer, which allows to separate and show the different surfaces (shells) and run a rather good auto-fix.

Another program that, with a little handiwork could help is blender. In blender you can first import the STL, then merge the vertices at the edge of the bore and cut cube and thus turn the two shells into one neatly, then re-export it as an STL. I strongly suggest to just add it to your Steam library if you want to keep it up to date.

Not the answer you're looking for? Browse other questions tagged ultimaker-cura 3d-models stl sketchup or ask your own question.

7
Wavy walls with Ultimaker Cura
3
Layer height issues creating partial top layer
4
My print did not turn out as I expected. Where can I start troubleshooting?
2
Empty space in model is getting filled
8
Under extrusion with Cura 3.1
3
Problems with STL model in Ultimaker Cura
4
Internal wall does not print in horizontal print orientation
1
Sketchup designed object printing first layer incorrectly
4
Delete only invisible parts of faces
1
Sketchup Free STL import in FreeCAD not working with Fasteners Workbench