I have a relatively new Ender 3 Pro, stock except for adding a tempered glass bed. I've fed about 3 kg of PLA filament so far, all Solutech brand. Near the end of the last reel, I started hearing a chunk noise. It varies in rate, between several/minute to going 10-15 between chunks. This has continued into a brand new, just unsealed reel so I don't think it's associated with the filament.

I was able to finally discover that the sound is coming from the extruder stepper area and was able to see that when this happens, the filament drive wheel snaps back maybe 30-40 degrees. (This happens in the middle of printing a line, not when the filament retracts between lines.) I'm assuming that the stepper motor is slipping. There is no sign of gaps in the printed model nor is the filament on the reel binding that I can see.

I'm guessing maybe that the filament is being fed faster than the hot end can accept it, causing back pressure.

I'm using Cura 4.4.0 as my slicer the whole time and while I have changed some settings, everything associated with speed, feed rate, hot end temperature and such are all stock. I did not notice this happening until recently.

Has anyone seen this happen before? Anyone have any idea what could be causing this?

UPDATE 3-May-2020: I have now confirmed that the problem was the extruder. Specifically, the input port which was causing the filament to bind. The front of the input port is a metal ring but the back is just plastic and and has worn from the PLA filament, as seen in this photo: 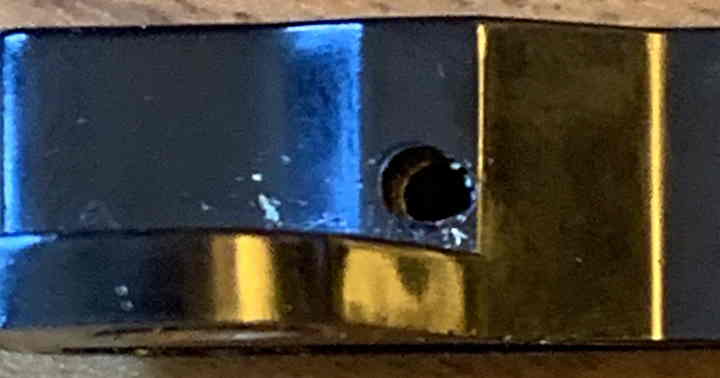 After some delay (see my other question here) I have installed the new, all-metal extruder (original stepper), the clacking is gone as well as the significant under-extrusion. (I also replaced the Bowden tube and print bed springs but I don't believe these were the problem).

Having seen what a few km of PLA did, I highly recommend upgrading the extruder.

Side point: immediately after the replacement, I started getting corners lifting off the bed which I hadn't seen before. I realized that the new drive gear was slightly smaller than the old so I checked the extruder calibration and it was about 10% low. I adjusted the extruder steps/mm from 93 to 99 to correct for this.

It appears the problem was the filament binding in the entry to the extruder assembly. I did start seeing signs of under extrudement such as the outer layer of a rectangular object separating of the rest of the body. Later, the problem became worse, with a lot of clanking, to the point that prints became quite fragile.

I have ordered a all-metal extruder assembly and will update as I get new results.

By the way, I'm really not sure why it's binding but running a strip of filament through the entrance hole, it sure seem to be binding. But in trying to disassemble the extruder and starting by removing the filament, I managed to get molten filament in the bowden tube. Without thinking about it, I pulled the blob all the way into the fitting for the extruder, plugging it so much that I cannot get the fitting off nor push it back into the tube. Anyway, I'm taking the opportunity to upgrade the extruder, tube and springs.

Not the answer you're looking for? Browse other questions tagged extruder creality-ender-3 stepper .

7
Why does my part-cooling fan cause stringing?
1
Ender 3 Pro extruder drive rocking back and forth
6
Ender 3 Extruder First Layer Perfect But Then Starts Clicking Afterwards
4
Ender 3 pro extruder skipping steps, tried multiple things
2
Why would my extruder remove the filament all the way out after prints? [Ender 3 v2]
0
Ender 3 - extruder stepper skipping
2
Z axis issue after upgrade from stock FW to Marlin 2.0.7.2 on Ender 3 Pro
3
Ender 3 V2 Extruder getting hot
1
Stepper motors on the extruder and Z-axis seem to freeze up during any fast movements