I am new to 3D printing which we all are/were at some point. I have no clue how to address the issue which likely is reason why I haven't found the solution yet. So if you see that this question has been posted elsewhere, please link it! Thanks!

I have had this issue for a while, however right now, one minute ago, it worked kind of. The text below is a description of the problem that very often occurs!

So the issue is basically the extruder. I have a Flashforge Adventurer 3. In it's software you have a "Load" and "Change" option which you change and load filament with. When I load filament it goes through the tube but it never exits the extruder. The common answer is that the nozzle is clogged. I have honestly checked this, it isn't the problem. I have cleaned it as Flashforge says and I have also been using really small metallic pins to push out all the filament. So that isn't the issue.

Sometimes the filament also gets stuck inside the tube. Or the Bowden tube I think it is called.

As it doesn't extrude filament when I load the filament it has nothing with the calibration to do what I know. So my own conclusion would be that something between the tube and extruder is going crazy. And I know, that isn't a good conclusion. However I don't know how to address it as I said before.

I know that it's hard to troubleshoot a text, so I will upload a video for you guys reading this. I really just want my 3D printer working again as the company said it probably isn't anything wrong with the machine..

When the machine starts working again it prints, but not good. Here is a video of how hit prints a big "F". Link. Sometimes it stops extruding filament for a while then it starts to extrude again..

There is also an image of the print below![ 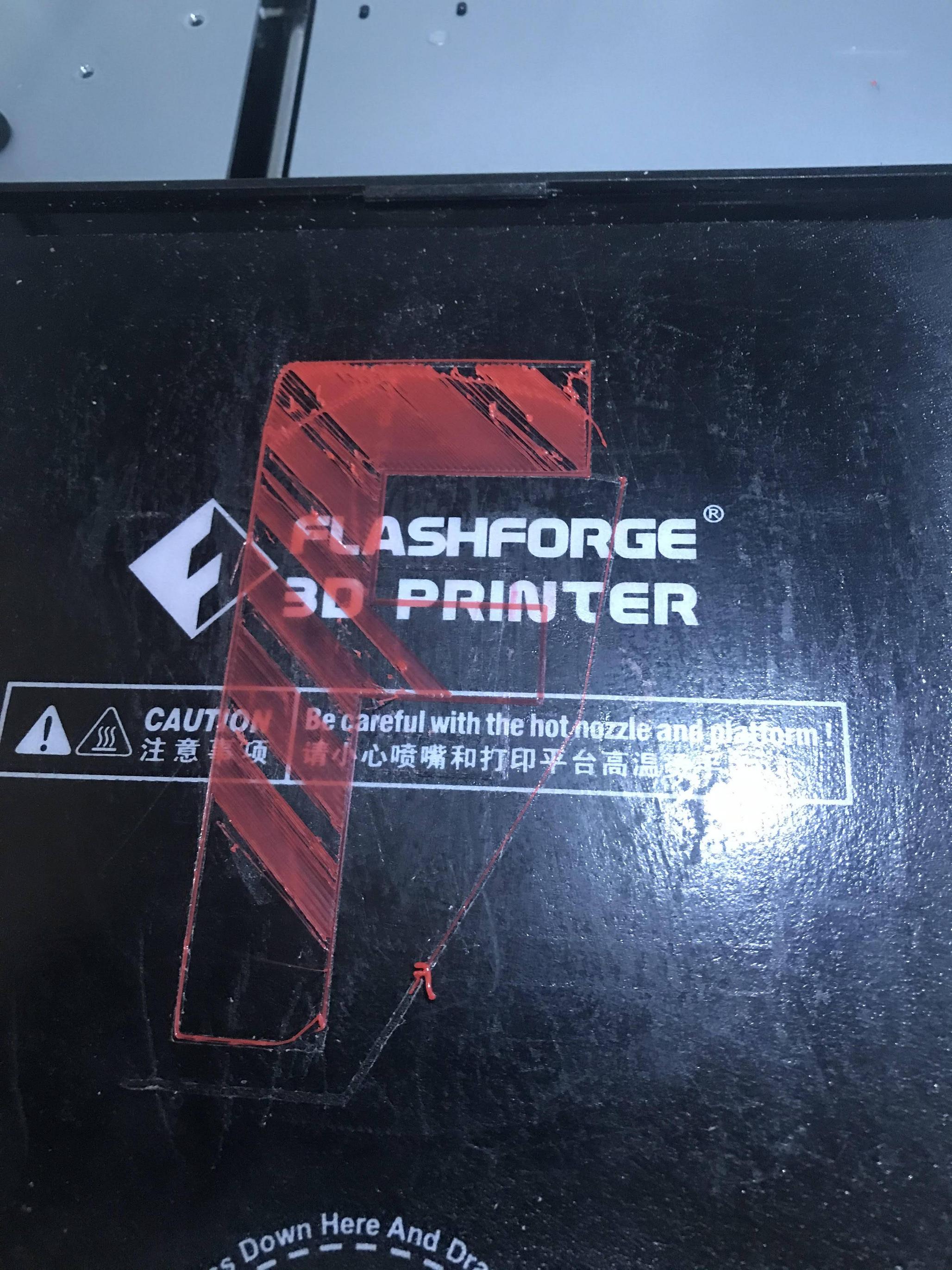 The machine is printing at 195 °C! I appreciate all the help I can get, I just want my machine fully working again.

Here is a video of the Bowden tube: Link

Here is a video of the extruder issue: Link

Here are two videos regarding the cold pull, I "try" to speak English so you get more information this time! Link Link 2

There are a number of different ways to narrow down the problem.

Your printing temperature is likely too low. Raise it up about ten degrees, but don't try a print just yet.

Ensure that the Bowden tube is firmly pressed into the hot end assembly. A gap below the tube is asking for future problems. If the tube is clear, remove it and examine for a squarely cut end and re-insert firmly.

I'm not familiar with the specifics of your model, but you should be able to disengage the Bowden tube from the extruder motor and manually push filament through the hot end and out the nozzle. For obvious reasons, raise the carriage above the bed before doing this.

Start with the 205 °C temperature and heat the nozzle. When it reaches stable temperature, push filament through. If it moves smoothly and extrudes cleanly, you're more than half-way home. If not, raise the temperature by another five degrees. At some point, you'll have a good idea of the temperature to use for that brand and color of filament.

Once you've checked those two items, you may have it solved, or you can edit your question to address any new developments.

Once you have the temperature determined, note that it may have to be increased to match a higher print speed. It is easy enough to push filament manually at the equivalent of a slow print, which allows the hot end to transfer the heat at a sufficient rate.

When printing normal speeds, if it can't move the heat fast enough, you have to raise the temperature or lower the speed. The former is preferable, of course. Who wants a print that takes two or three times longer?

You may have more than one problem. I think your next step is to focus on the hot end/nozzle area. With the Bowden tube removed, insert a length of filament and raise the temperature to around 200 °C and push the filament downward.

You probably won't have filament passing through the nozzle, based on the limited information in the video. Once you've confirmed that, reduce the temperature in the nozzle to about 125 °C, let it hold there for a bit. You should note that the additional filament has now fused with that in the heat sink/heat break area. Increase the temperature again to 200 °C and apply gentle upwards pressure.

This is not a typical cold-pull process, but close to it. If you had nylon filament available, I'd recommend to use the nylon cleaning method.

I suspect that your hot end is clogged at the point where the bowden tube should have been flush into the bore.

I did not see both ends free on your Bowden tube. Your second problem may be related to that aspect. Consider to manually feed filament through the tube (after first clearing it) and if that doesn't work, the bowden tube is internally damaged.

The additional videos are helpful. Two items come to mind. The temperature may be too low at 200°C. You can't hurt things by going a bit too high, even as high as 225°C or 230°C but don't make big jumps to get there. Bring the temperature up to 210°C and see if you can force filament smoothly through the nozzle by hand. Keep on this practice until you find a good temperature.

For the second item, it's possible that your e-steps need to be checked. Feed filament through the bowden tube with the tube removed from the nozzle assembly. Feed a few centimeters beyond the end and make a mark where the filament is at the edge of the tube.

Using a terminal program or your printer control software, command a 100 millimeter filament feed. When it is completed, mark the filament and determine if you have extruded the correct amount.

The second part of the second video certainly presents well the frustration you are experiencing. Many of the people in the 3D printing community have had similar frustrations.

For the lock-up portion, check the manufacturer's web site for firmware upgrades, as sometimes there will be a correction to a problem such as yours.

So there could be multiple solutions to your problem. One of them being as mentioned in another answer that you aren't printing hot enough. Double-check the filament that you got, there should be a temp rating either on the spool or the description of the product.

Another solution is if it is hot enough but it's not going through, take the tube out and hit the extrude button (It should be the button you hit when you resupply the filament and if it doesn't come out of the end there, you will need a new tube to feed it.

If that isn't the case either and you are double-checking to make sure it is hot enough and that it's not getting caught in the tube (you could double-check the temp of the nozzle with a digital thermometer just to be extra safe) check out your hot end to make sure that nothing is snagging. So, take off your tube and nozzle and look through it to see if you see anything sticking out or anything like that, there shouldn't be though.

Not the answer you're looking for? Browse other questions tagged extruder bowden flashforge .

25
What are the advantages and disadvantages of an all-metal hot end compared to one with a PTFE heat break?
5
Extruder skipping/clicking (brand new printer)
6
Installing bowden tube into E3D V6
5
PLA Filament Not Softening During Load w/ FlashForge Creator Pro
6
How does slipping Bowden tube affect retraction or does it at all?
0
Why did my extruder motor stopped working?
2
Why would my extruder remove the filament all the way out after prints? [Ender 3 v2]
0
Anycubic Vyper Filament Stripping