After I tried a cheap PLA filament (maybe too cheap), it clogged the nozzle. I cleaned it, but any other filament I have would have similar problems from then on. After some days doing test prints, it clogged again. This time, I heated it up to 240 ºC, I unscrew the nozzle, cleaned it up, chopped the Capricorn tube (it had clear symptoms of a previous tube not reaching the bottom of the hotend and leaking material around it), perfectly aligned, cleaned the heating block with a brass brush, started screwing the nozzle… and it never reaches the end. It even jiggles a little bit (by "jiggles", I mean that when the hotend is hot, you can push the nozzle back and forth, and it does move... like it was a joint, and not a threaded bolt), like it was too small for the block. I try screwing a new nozzle. Same happens.

To me it looks like the heating block thread broke, but I can't be sure. I tried a thicker nozzle (0.8 mm, but same thread in the end) and it worked. I could feed filament and it wouldn't look like clogged (at least for 15 cm of feeding filament, when in previous cases it was almost instantaneous).

Time to get a new heating block? Any recommendation?

Would another kind of heating block be better?

Edit: Here's a picture of the bottom of the heating block. Now it's clear there's a metal chip glued with material, and almost (if any) no thread at all. 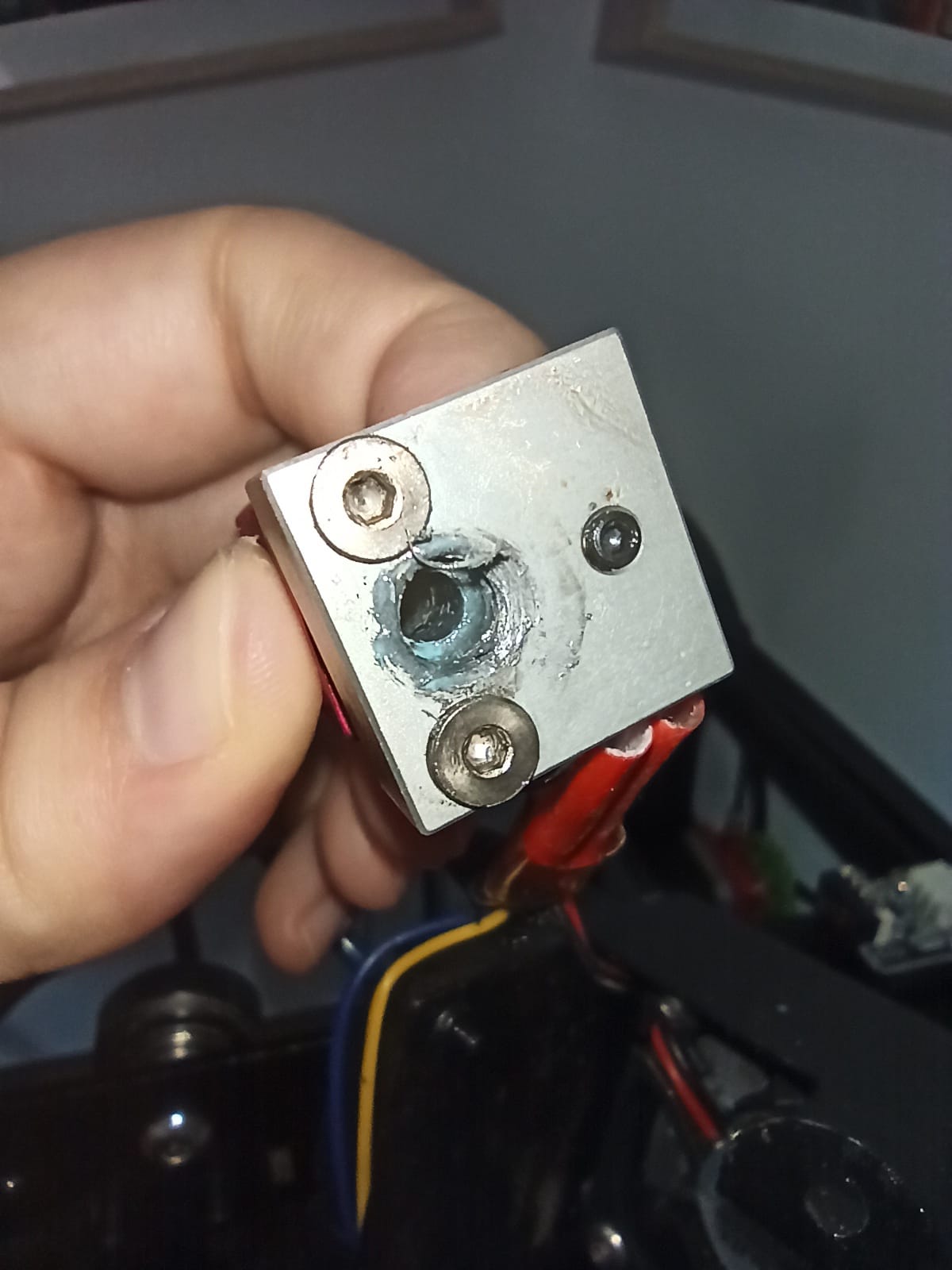 Another question. Could it have been that cheap material that caused the clogging, or was it just a lack of proper maintenance?

You need to order a new heating block (just a few bucks/euros, so order 2, and spare nozzles, you don't want to install the old nozzles), you completely worn out the threads, this is beyond repair. It looks as if you used too much force to secure the nozzle into place.

This is how it is supposed to look: 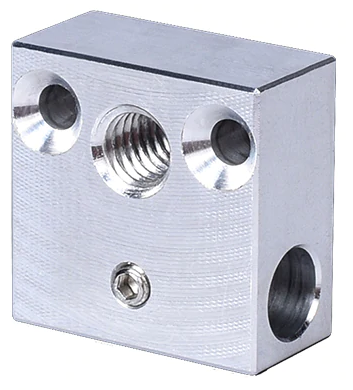 You can find these cheaply at those typical Chinese vending platforms or online marketplaces. Just search for and Ender / CR-10 heater block.

Typical dimensions are found below: 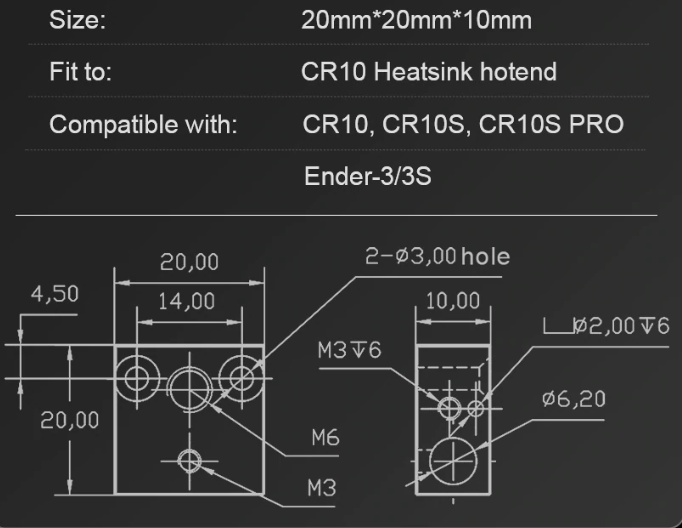 If the threads are damaged badly enough not to hold a nozzle rigidly, you should replace the heating block, but there might be hacks you could do to keep using it for a while until you're ready to replace. I've had luck replacing threads in completely unrelated applications with epoxy, and if you can get one that handles and transmits the heat well enough (maybe JB Weld? not sure) it might work here.

I don't think there's any indication you need to change to a different kind of heating block. That would only be indicated if there were lots of other people reporting the same problem you're having with your printer model or similar ones. It seems more likely that, if they're damaged, you just did it by over-tightening or over-vigorous cleaning with the brush.

Not the answer you're looking for? Browse other questions tagged nozzle creality-ender-5 .

0
How to remove a stripped nozzle

7
Hot end jamming very quickly
4
The bottom of the printed objects has waves after replacing the nozzle
5
Extruder/nozzle keeps clogging up
5
What is the functional difference between an e3D-Style nozzle, Makerbot MK8 and M6 Chinesium Nozzles?
2
What clearance should I leave between parts that are supposed to fit together perfectly when using a .6mm diameter nozzle?
1
E3D V6 nozzle seized into heater block
2
Extruder always clogs up almost immediately after cleaning
1
How to replace the nozzle in my hotend assembly?
1
Anycubic i3 Mega layers don't stick together/are too thin
1
Nozzle getting clogged all the time