What type of kinamatics is 3D Gence One using?

I was looking at some end high 3D printers (drooling just a little bit) when I found this. 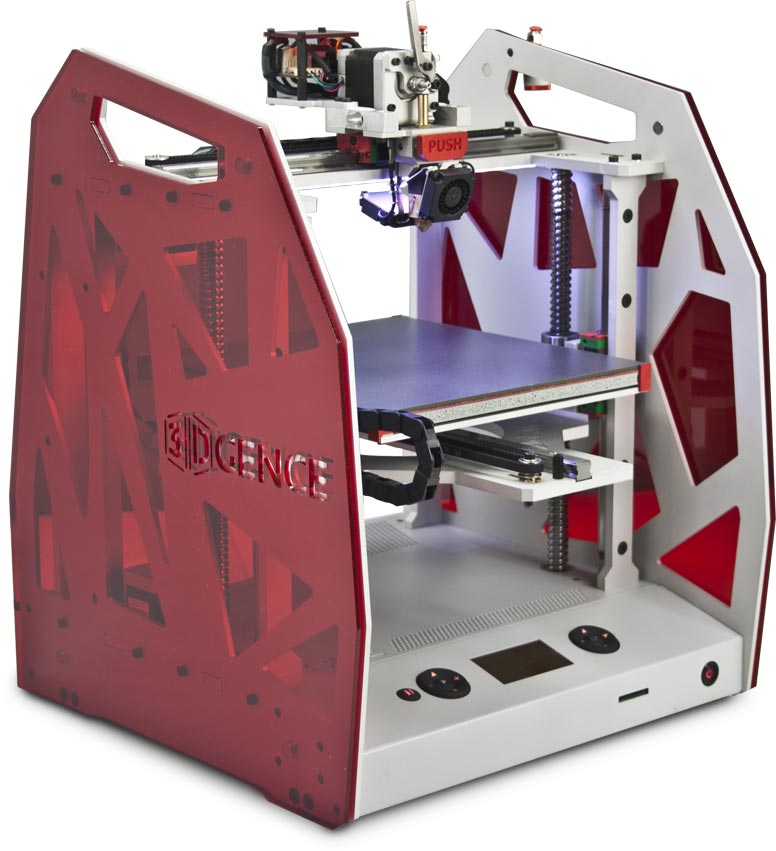 Now, this was a 3500 \$ printer when new back in 2016. I'm relatively to the 3D printing (well... kind of) and have not seen this type of design before. What is it? Cartesian? CoreXY? This style, from my limited knowledge, looks like a best of both worlds kind of scenario because if you look at it - it has that traditional simple Cartesian design, but with a light head of a CoreXY type printer (Exclude the circuitry behind the stepper, that is something else). This was designed to be used in a mechanical application, so it has to be precise. Is this a good configuration and does Marlin support it?

I'm can't say for sure, since this is my first time seeing this type of 3D printer configuration too, but I think this is a cartesian style printer. If you think about it, it is similar to a Prusa-style printer, but instead of an x-gantry being raised and lowered by a leadscrew, the heated bed is being lowered and raised with two leadscrews. Software-wise, the printer you mentioned should be configured exactly like a Prusa-style printer, but with a reversed Z-axis, since to make the heated bed move closer to the hotend, it must be raised instead of lowered.

I personally do not think this printer is a CoreXY configuration since a CoreXY printer relies on two motors that work simultaneously to move the X and Y axis, while the printer you showed has the X and Y-axis moving independently of each other (as can be seen by the belt under the heated bed and the belt that moves the hotend left and right). At least, in my opinion, the way the X and Y-axis operate on a CoreXY is what makes the CoreXY unique, instead of the raising and lowering of the heated bed.

You can read about the variations of Cartesian 3D printers here. If you are interested in other styles of 3D printers, you can check the Delta and Polar style printer section of this article.

Hope I piqued your interest in 3D printing :D

Feel free to comment on this if you have more things to ask, and I'll get back to you as soon as I can :)

3
How can I program a 3D printer to move using Arduino?
4
Dual PSU with one switch fuse
5
Why do 3D printers have only one limit switch?
5
What grease to use for linear rails?
1
Printer with two extruders but one as a backup
0
What is average price for 3D parabola?
2
Y-axis on KP3S Kingroon only moves in one direction
8
What do linear rail codes mean?