I've had all sorts of trouble getting first layer to stick but finally managed it. However the thin end of this hook has now warped and the other end is too. 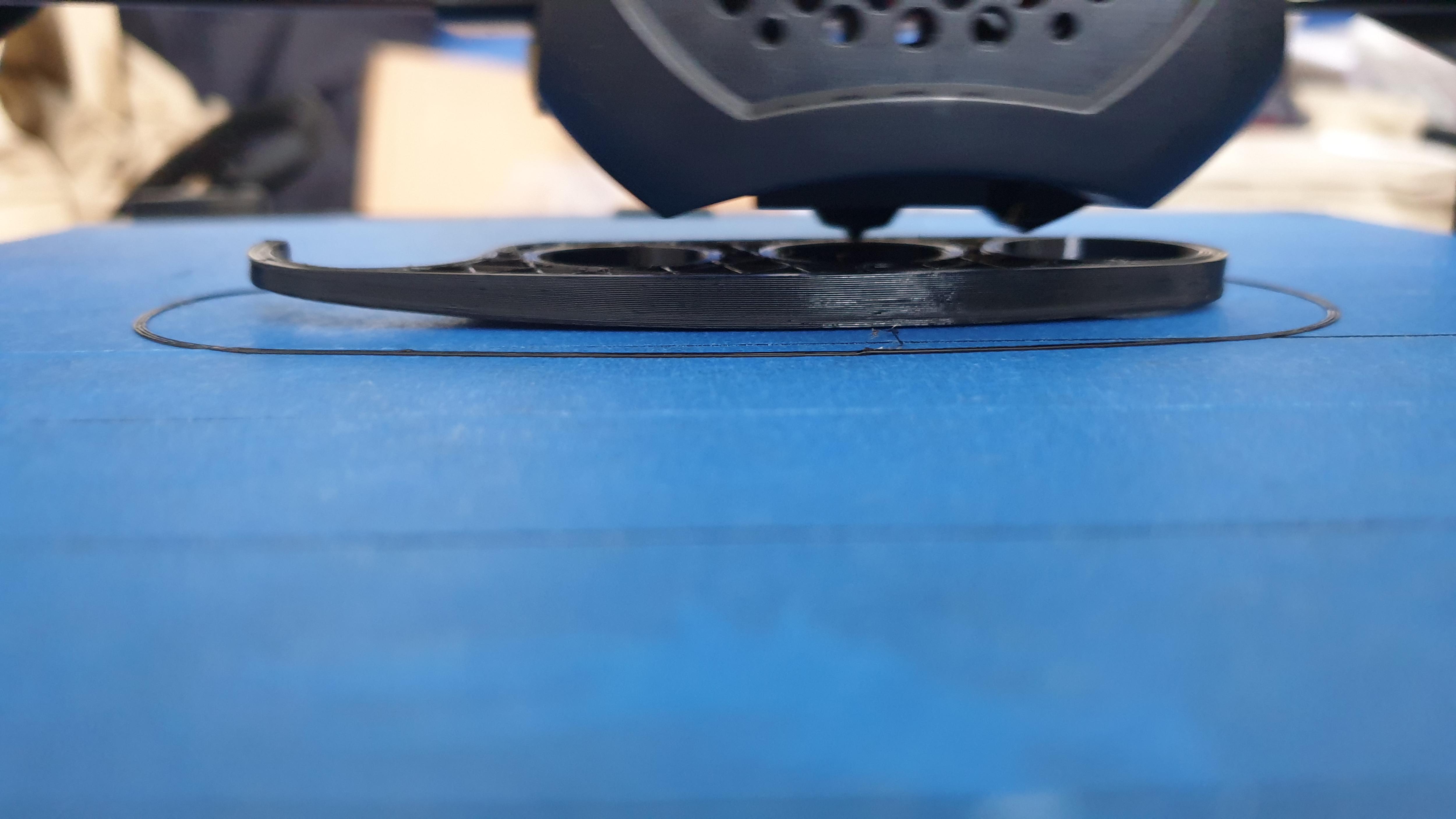 Looking at the image above, you can see it's much thinner at that end. Should I try a lower nozzle temperature? Or bed? Or both?

I have to mention that the tape has been cleaned with isopropyl alcohol. I can print PLA no problem direct to the bed but am having so much trouble with PETG - rather than warping this could actually be adhesion problems. I've tried a higher initial layer (0.3 mm vs 0.2 mm), 0.1 mm Z offset, gapped to 1 sheet of paper as per PLA, then 2 sheets - I've done that 50 mm in on each corner and then checked it in the middle of the bed too. Initial layer is at 10 mm/s and then to 40 mm/s

As you can see in the picture the brim looks rather flattened, but if I give more gap (e.g. 3 sheets) it doesn't even stick at all.

I have managed to print a benchy after maybe 6 attempts, but this was luck and had really poor adhesion, a gentle tap with my finger dislodged it. The actual print was fine.

Tempted to try another PETG but wanted to make sure I'm not missing anything obvious - at the moment I can't even print the brim again because it won't stick.

I'm really confused because a lot of I read suggests PETG sticks really well but I've having the exact opposite experience.

PETG is a pain to print with, but adhesion/warping usually isn't the issue.

To begin with, fan should be completely off for PETG unless you hit problems that necessitate a fan, and then only minimal. Certainly not 50% or 100%. Fan will seriously impact adhesion between layers and give you brittle prints. It also might be responsible for the warping you're seeing, but the biggest issue here is that you have an adhesion problem.

I'm not sure if blue tape is generally recommended for PETG. The Buildtak clone that came with my (original, not v2) Ender 3 adheres extremely well (if anything, too well) with PETG so I've never worried about adhesion with it. But if it's not adhering to your blue tape or v2 coated-glass bed (or if you're concerned about ruining that bed from PETG adhering too well) you need to find something it will adhere to. I'd suggest getting a Buildtak-clone Ender 3 v1 bed surface (you can find these cheap) and clipping it to your bed (since you presumably don't want to glue it over the v2's much nicer bed).

I guess I should mention that distance to build surface could also be the issue. Make sure the bed is leveled correctly. I don't like the paper method because it's too imprecise; the best way I've found is to move the Z axis to 0.1 mm and adjust until 0.1 mm feeler gauges fit under it with some friction and 0.15 mm ones don't fit at all.

Not the answer you're looking for? Browse other questions tagged adhesion petg warping or ask your own question.

14
Why does hairspray work as an adhesive for ABS?

11
Prints are now sticking too well to the bed. What to do?
5
PETG filament doesn't stick reliably to fake Buildtak surface
5
Bed too close to nozzle?
2
How to level bed after applying glue stick for bed adhesion
3
Polypropylene Bed Adhesion
8
PETG layer adhesion
0
What is the best technique to improve removing PETG from the print bed?
6
Thermal Runaway E1 at Layer 2
1
What is the best build surface for PETG?