Do thermistors degrade in accuracy without hard failure?

Lately I've been having problems with overhangs not adhering when curvature is outward (stringing across instead) that look like what you'd see at insufficient temperature, and that go away with temperature jacked up a bit (PLA at 220 °C, which is a bit extreme) or fan disabled. Is it possible that the hotend thermistor has drifted and is no longer accurate, making the actual temperature lower than nominal? Or do these things fail hard when they fail?

Yes, thermistors can drift in value as well as outright failing (usually open).

In my experience this is not uncommon in thermistors operated above 100 degrees C. The drift is typically downward in resistance so the controlled temperature will be less than the desired setpoint, which is exactly what you are observing.

Most thermosensors are functionally nothing different but a temperature dependant resistor. As such, our boards usually use $U=RI$ to get to the resistance, and then compare that to a temperature table. In effect, they put in a regulated potential difference, and measure how much current flows. Plugging this into $U/I=R$ gives the Resistance, which then gives the temperature from the table. In fact, since U is assumed fixed in most firmware, the lookup can also be done directly via the current.

In theory, a resistor's resistance follows $R=R_0(1+\alpha \Delta T)$. Now, Alpha is the proportionality factor of our resistor, delta-T the difference to the tested temperature, at which point the resistor gives R0. Note that Alpha might be also temperature dependant, which is why the firmware looks up the table, not calculates it fresh. So far so good, right? Well... one more thing. Under the standard conditions, we can also use $R_0=\rho \frac l A$ to learn about the resistor, the resistance is the specific resistance times length divided by crossection area.

Now, from just the many factors that play into the thing, we have several points where we might gain error over time:

I am not affiliated with e3D; they are merely one of the best-documented stores for replacement parts I know about, which is why I consulted their catalog.

I don't think it is the thermistor degrading. To answer your question directly, all my thermistors have failed because the tiny wire has broken off, and generally the fail is “hard” not soft.

It is more likely you’re experiencing absorbed humidity in the filament from it being out on the spool too long. this makes you have to increase the temperature.

I’m sure if you dehydrated the spool in the oven for a bit you’d get better prints and a slightly lower print temp.

Additionally, keep in mind that a lot of PLA on the market nowadays runs at higher temps because it’s laced with something (“PLA+”?). Check the item description for indicators of a new or improved formula.

You could try ordering a thermistor of the same make and testing the temperature of it. You can get a half dozen for about \$10. The Marlin firmware your printer probably uses should have a section for thermistors and what kind you’re using. It’s probably type “1” which is the cheap kind.

You can try using one of those distant head thermometers to measure the temperature wirelessly at the hot end. These are probably over \$100 right now because of COVID. I think that is how a well-resourced person would handle this (i'm not one personally).

Maybe start with the oven and while it’s cooking, research the thermistors and what goes in to replacing one. It’s a good learning experience because one day your hotend may be irreparably clogged and you’ll want to know some of the steps to disassemble it.

It is indeed possible that the thermistor is broken (yet not sure). I am aware of two types of issues with thermistors:

For how to troubleshot the component, however, EE.SE seems more convenient.

In practice thermistors hard fail. They do not "drift" fast enough for an application to notice. What's most likely happening (assuming that the problem is the temp) is that the reference voltage that is being used to determine the resistance of the thermistor could be faulty. As a simple test, you should get a basic thermometer to measure the temperature of the room. Then check it against the printer when it is sitting idle. If the 2 temps differ by more than 1 degree, then something is wrong. Check if the bed and nozzle thermistors are reading the same value (again to within 1 degree). If they are not, then swap the leads and see if if you get the same problem (with the printer idle of course).

If you have access to a multimeter, then measure the resistance of the thermistor, and then look up what the resistance should be at a certain temp (there are tables for this on the internet).

NTC Thermistors can fail progressively due to moisture, cracking, changes in the material structure. Don't forget that you are operating them at neat the maximum temperature, not at room temperature.

In this article about NTC resistors for current limiting (subjected to current pulses, but tested also for high temperature stress) they say:

Process of degradation of NTC thermistors has complex character and is, in considerable degree, determined by the total number of applied current impulses or thermal cycles. Initial rise of resistance is caused probably by oxidation process or modification of ionic distribution.

Luckily, after an initial burn-in, they are stable for quite some time. You may just need to recalibrate. Or use a PT1000 resistor which should not have similar issues, and which works without any additional electronics.

See also here for a statement by a manufacturer that NTC ages:

At room temperature the polycrystalline material shows solid-state reactions which lead to an irreversible change in the characteristics (usually resistance increase, change of B value etc). Physical reasons for this may be thermal stress causing a change in concentration of lattice imperfections, oxygen exchange with the environment (with unprotected, non-glass-encapsulated thermistors) or diffusion in the contact areas of metallized surface contacts. At low temperatures these reactions slow down, but at high temperatures they accelerate and finally decline with time. To enhance long-term stability, our NTC thermistors can be subjected to an aging process directly after manufacture.

See this graph from this page for drift as function of time and temperature: 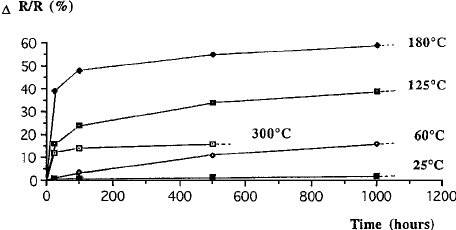 3
Easiest way to build a horizontal hotend mount at home, without printing
6
Hotend heating failure too short before limit
1
How to control 4 thermistors in a heated bed?
0
Is it practical to build a separate hotend temperature controller to assemble hotends without taking up printer time?
1
Printer thermistors read completely wrong after changing firmware
1
Effects of bad power supply on temperature/flow?