I just changed my 0.4 mm nozzle for a 0.2 mm but it seems to jam in the heater probably due to too much filament trying to get out by the nozzle. Where is the setting to reduce the filement speed and how much I should reduce it?

Here are my settings: Config.txt

You need to reduce print speed or the volumetric flow by this factor or make sure your printer can handle the increased flow by reducing the viscosity of the melt - for example by increasing the print temperature.

Here's where you change the speed in Prusa: 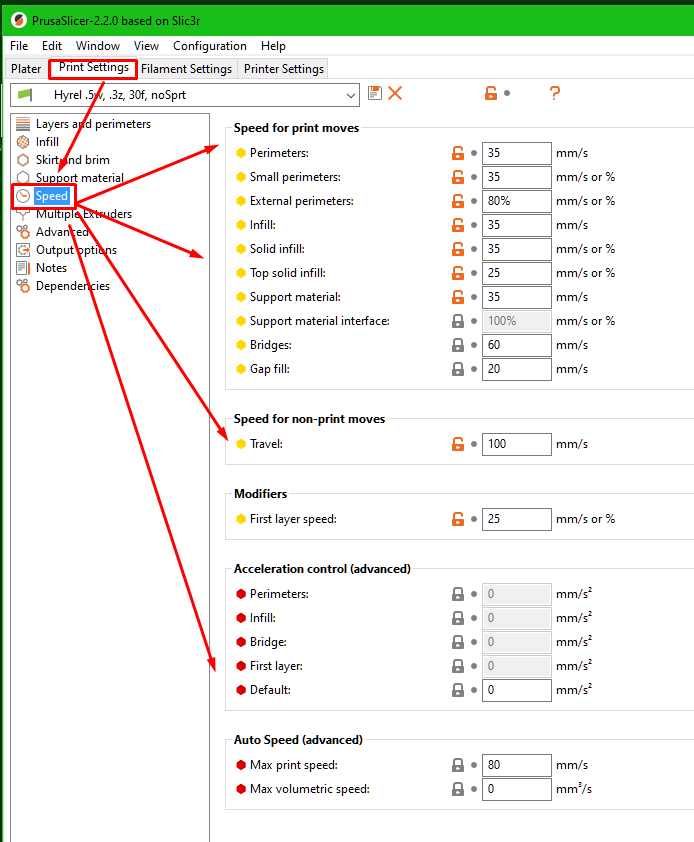 As Trish said, you're likely trying to push too much material through too fast.

Steps you can take:

I'd personally start with increasing my print temp 10 degrees and cutting my print speed in half, as well as making sure I had 0.2 mm nozzle and extrusion widths.

The discussion about slowing the print speed is important, but in my experience it is not at the root of the problem, and slowing down printing may make it worse.

If ny "heater" you mean the complete hot-end, then I suspect you are jamming in the cooler part of the hot-end. This cooler part is separated from the heater itself by the heat break, which is often a thin-walled metal tube.

It is heated by:

When you are printing with a smaller cross-section of extruded filament, the slicer program should adjust the flow rate and speeds based on the lesser volume of plastic extruded for a given pressure. Unfortunately, this is less plastic, so the filament cools the cooler end of the heat break less than it would if the feed rate were higher. As a result, the temperature of the cooler end goes up. If there is insufficient airflow to keep the cooler side below the softening point of filament, the filament softens and jams inside the cooler end.

Of course, if your jam actually is in the hot end, this discussion is not relevant.

But, I have found with my Prusa i3m3 that I have had problems with jamming in the cooler end, especially when I printed filament with a higher melting temperature, ABS in this case. I reduced the area of the airflow so that no air could pass through other than by passing over the heat sink fins, and the ABS printed correctly.

All of 3D printing is a balance of one factor against another. It is hard to lose, though, by increasing the cooler-end temperature. All will seem well until you print something with a lower flow, or a higher retraction rate, or you try using a higher temperature for the same filament. Then the jam can unexpectedly occur, or, perhaps worse, it can be an intermittent jam, or there can be a lot to sticktion, and printing becomes prone to gaps, or occasional under extrusion.