I have a 3D print where there are 5 holes with a diameter of 4 mm in a cup, and I would like liquid to flow through all 5 holes at once while slowly draining the cup (by slowly I mean: just take a few seconds and not drain instantly). Therefore the holes can not be very large.

When I fill water in the cup it drains fine until there is a small amount of water left, and then it just stops with a small layer of water flowing over the holes.

I'm guessing it is due to surface tension and not enough pressure from water above to push the water through...

Is there a hole design that fixes this problem? I don't know what to Google or if this is the right place to ask the question. It just takes too long to guess my way through and print every attempt at the right size or shape of hole (which I have done so far and still got nothing).

What you encounter there is a combination of Adhesion, Cohesion, and Capillary Force.

Cohesion is what holds the water together. Adhesion is the force to retain water against a wall or hanging from a pen's end, it is proportional to the surface wetted. Capillary Force is the resulting effect where water moves up through a thin tube, it is anti-proportional to the diameter and in the opposite direction of the weight (force). Their relation can be shown in this picture, where a droplet hangs on the end of a glass rod, which has a capillary in it: 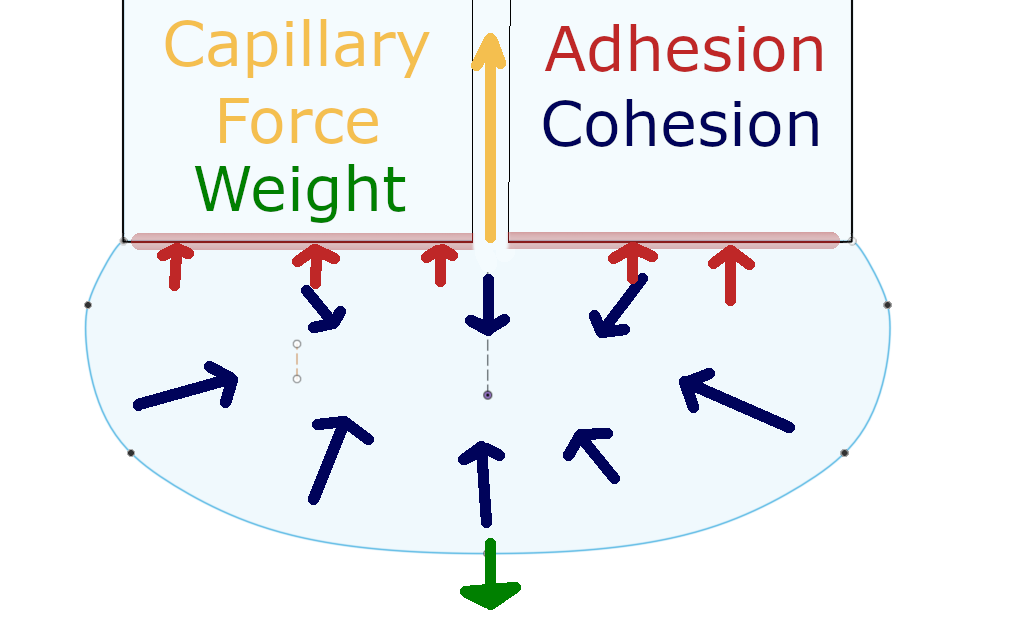 How to reduce the water sticking in the cup then?

An example for a (non measured) design which relies heavily on chamfering to guide the water to the already chamfered holes and then keeps the straight section as short as possible could look like this: the central hole has a very wide chamfer, the whole plate directs water to the center and each of the other holes has a chamfer to guide out water.

If it is possible to add a downward pointing thin needle (hair, AWG-40 wire etc.) to the edge of (each) hole, do it. The droplets will smoothly glide along it to its end, where the needle circumference becomes so tiny that surface tension cannot hold the droplet anymore. Surface tension won't have a chance!

With a very thin needle and funnel-like hydrophobic surface of the vessel, you may get rid of virtually any (microliter) amount of water. It can be hard to make it by 3D-printing, though.

Not the answer you're looking for? Browse other questions tagged 3d-design post-processing or ask your own question.