Is it possible to create a completely sealed box?

I would like to create a case or a box which has two holes for incoming and exiting water. I want the box to be opened and closed. Therefore it is good to be something like a treasure box.

Is there a way to design the lid of the box to prevent water from leaking around the areas where the box and the lid are meeting without using glue? 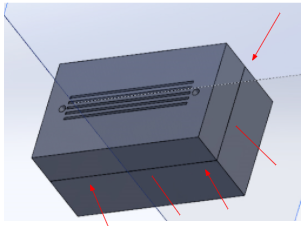 "Completely" is always relative, but for water at the pressures involved it's probably achievable. Normally you need some sort of gasket (material that can bend/compress to slight imperfections in the mating surfaces), and a means of holding the two surfaces tight against the gasket, to get such a seal.

With 3D printing, it's plausible that the print itself could be sufficiently non-rigid to achieve this, if you have a way of keeping the lid and box pressed tightly against each other - bolts through the lid, clips around the edges, etc. But it's unlikely to work well.

I would either print I suitable gasket in TPU, or cut one from some suitable material if you don't have the capability to print with TPU. Either way you still need to design your box and lid so that they're pressed tightly against the gasket.

One possible frame challenge would be doing a round box instead, with a circular threaded lid. It's likely that you could achieve a decent seal for your purposes without any gasket just by tightening the threads, and if not, you still have a really good setup for use with an added gasket.

I know this sounds obvious, but given the box has holes in the top – does it only need to be watertight when it's the right way up? If not, you could just do something like: 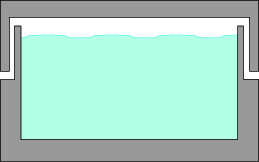 Assuming that won't work, I think a really good seal would be hard with just something like PLA, because the printing texture alone means there will always be tiny gaps between the mating surfaces. In some cases, those grooves will actually act as capillaries (if you've ever tried to use a sharpie marker on a print, you can imagine what I mean).

If the lid fits snugly, then just lining it with something like plumber's thread tape would probably do a good job.

If it needs to work straight out of the printer, then I would try something like this (obviously I've exaggerated the detail): 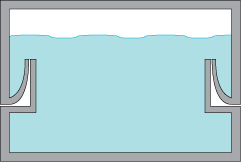 The idea being something like the plastic seal you see on some types of refrigerator door, which has a thin wall with a free edge that allows it to flex.

NB in all these cases, sharp corners will cause problems – it will be easier to get a seal if you put a radius (say, 5mm) on the vertical edges of the box.

Not the answer you're looking for? Browse other questions tagged water-resistance or ask your own question.

9
Is it possible to make a hermetic sealed 3D Printed case?
5
Which filament to use for an application involving water circulation?