How to optimally make a 3D model of an object using photos?

I would like to obtain a 3D model of my insoles. I tried to scan it with 123D catch but finding reference points is difficult because the insole is black.

How could I improve the scanning? I attach a photo of the insole to show its not easy shape.

I thought about placing a grid of white spots on the surface, but will it be enough?

Also, is it recommended to keep the camera still and rotate the object (I have a rotating stand) or should I move the camera? in the second case, the accuracy of the photos will be lower, while rotating 5-10 degrees the stand every time is extremely easy.

As background should I use a checkerboard or something else not repetitive?

I noticed that the insole has basically three different "levels", joined smoothly with each other. These "planes" are sloped the same way, so that if I change the pitch of the insole by about 10 degrees, they will be horizontal. Would it improve the accuracy?

Edit: the insole is perfectly new, newer worn before. 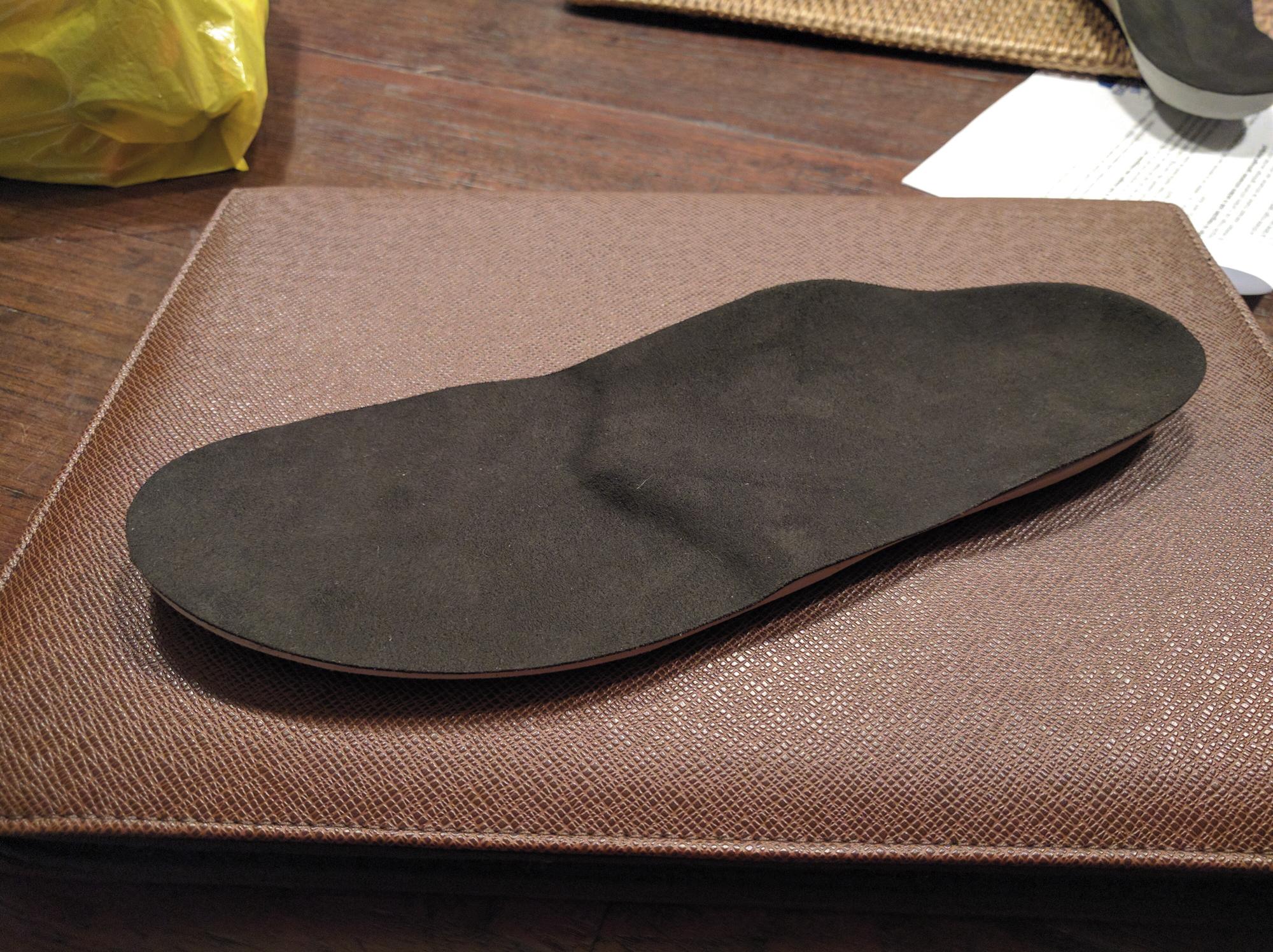 I dotted the insole with white paint (the white eraser paint used in office and school) and I took a series of photos with the insole in top of a tripod, laying on a flat white cardboard support. 55 photos in total at 3 different elevations (side, medium, high). I also did a test with fixed camera and rotating object.

Photoscan did not work well in general. Keeping the object fixed produces the best results, but poor.

123D Catch did a much better job! again with fixed object and moving camera. Still, treating the resulting mesh was difficult and the accuracy could be improved.

Autodesk Remake 2017 worked VERY well, as you can see in the attached screenshot, and it allows the editing of the mesh to remove useless parts of the model. I haven't tried yet to process the photos with the camera fixed and the rotating object. I did the processing locally (it's slow!) with maximum details and resolution.

Usually, the largest variability in 3D imaging is lighting, closely followed by the color scheme. You'll probably want to heed some of the following points:

You're right, a typical 3D scanner will have a difficult time with darker colors due to physics. However, there are no rules that say you can't change the color of the object.

In this application, I would suggest just going ahead and spray painting the object and scanning it. Scanning the insole is going to require super tight tolerances in scanning as I'm assuming the insole is naturally worn due to use.

Completely alternatively from 3D scanning, you could try using a 3D touch probe like on a CMM (Coordinate Measuring Machine). It will take longer, but a touch probe doesn't care what color the object is.

The touch probe comment seems to be a hit, so I'll elaborate. My experience with touch probes comes only from manufacturing technology and can be found and in a variety of different machine tools:

Alternatively, I've heard of people adding touch probes to their 3D Printers, but I haven't seen it before. In theory, a basic touch probe can easily be achieved by using a momentary switch. If you're good with programming and maybe a bit of Arduino, you could do the following:

There are a few file types off the top of my head that can be used including:

This is a short pointer to another webpage: https://www.sculpteo.com/blog/2016/01/20/turning-a-picture-into-a-3d-model/
It may be helpful.

3
How to print LiDAR file format LAS
1
How can I scan a thing and modify it or scan two things and compare them?
7
Using Kinect 360 as 3D Scanner
3
How to use a BLTouch or equivalent touch probe to 3D scan objects with a 3D printer?