I built a delta 3d printer (like a mini Kossel) and now I'm trying to calibrate it. I made all the horizontal and vertical bars myself with wood and I bought angle joints (between bars) made with 3D printed ABS.

It passes all tests in Z correction tools calibration. I used a z-probe (with manual deploying) to calibrate it with G32 and G33 commands.

Now I'm trying to calibrate the distortion that takes place on the x and y axes. Basically what happens is that in a test cube of 10x10x10mm it is translated on x and y axes at some points in the corners.

Below an explanatory image: 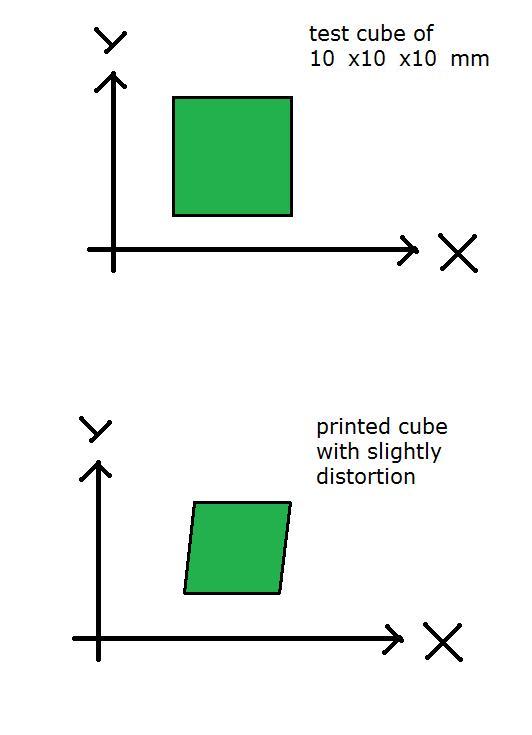 The dimensions are good (less than half of a mm) but got this bad visible distortion (about 1 mm or less).

There is a tool or a command in Repetier-host/firmware that corrects this issues?

Skew distortion in deltas means there is something physically wrong with your printer build, such as the towers not being evenly spaced or being tilted. The first thing you should do is confirm the mechanical build -- measure the distance between towers, angles between towers, parallelism of all three towers, and perpendicularity of all three towers to the bed. If you post photos of your build, we might be able to provide more specific advice.

If you can't get the mechanical issue sorted, it's possible to calibrate out some specific build errors (like skew due to uneven tower angle), but that's nearly impossible to do "by hand." You really need to use a Z probe and auto-calibration sequence such as in Rich Cattell's Marlin fork or dc42 RepRapFirmware.

Not the answer you're looking for? Browse other questions tagged repetier repetier-host delta kossel .