Is there any research into use of thermoelectric cooler along with part cooling fan to get quicker cooling without strong air currents that apply pressure to the still-soft material? I experimented with custom fan ducts in the past trying to get better cooling and avoid warping for printing thin layers of PLA at high speeds, but found that the concentrated stream of air blowing on the part actually deformed it before it could cool. At the time I wondered if using significantly colder air, at a much lower flow, would work better. But every time I've searched for thermoelectric (peltier) coolers with 3D printing, I've found results that are about cooling motors or the heatbreak (especially inside heated enclosures), nothing about part cooling.

If there is no research on this and I want to experiment myself at some point, are there constraints I should consider for how to mount it (in my case on an Ender 3, but also in general)? Perhaps on a separate intake duct before the cooling fan? Or between the cooling fan and hotend assembly to let the waste heat dump into the assembly that the hotend fan is already cooling?

TECs or Peltier Elements are incredibly inefficient compared to airstream coolers. Their only benefit is perfect temperature control, from which you will have nothing because there is no firmware that cares for the temperature of cooling air or the cooling body of a Hotend. Also, a TEC creates a lot of heat on its output side - which means you heat the air just millimeters away from where you want to cool the air!

To get the heat produced by the TEC away, you either need a rather large cooling body - which is a lot of weight and space you need. As a result, you reduce the maximum print speed a lot. A water cooler isn't necessarily that much lighter, but it also gets us the trouble of having a highly conductive liquid right on the printhead.

You'd have much better efficiency by having compressed air decompress (as in: get out of a slim nozzle) slowly just a few millimeters in front of the air intake of your part cooling fan - expanding air cools down a lot, and running a compressor for a few moments takes less energy than running a Peltier element with the same temperature drop. In a pinch, a CO2 canister could provide the needed high pressure air, and a nozzle like you have it on an airbrush would work.

Move it off the printhead?

As the weight of the necessary secondary equipment is an issue, it might be better to move the Peltier element off the printhead. For example, by using a flexible hose that supplies the air to the cooling fan, and feeding that with precooled air - and now a Peltier element can shine: by having the weight be no longer a matter, we can use a rather large cooling body on the outside and cooling fins on the inside. 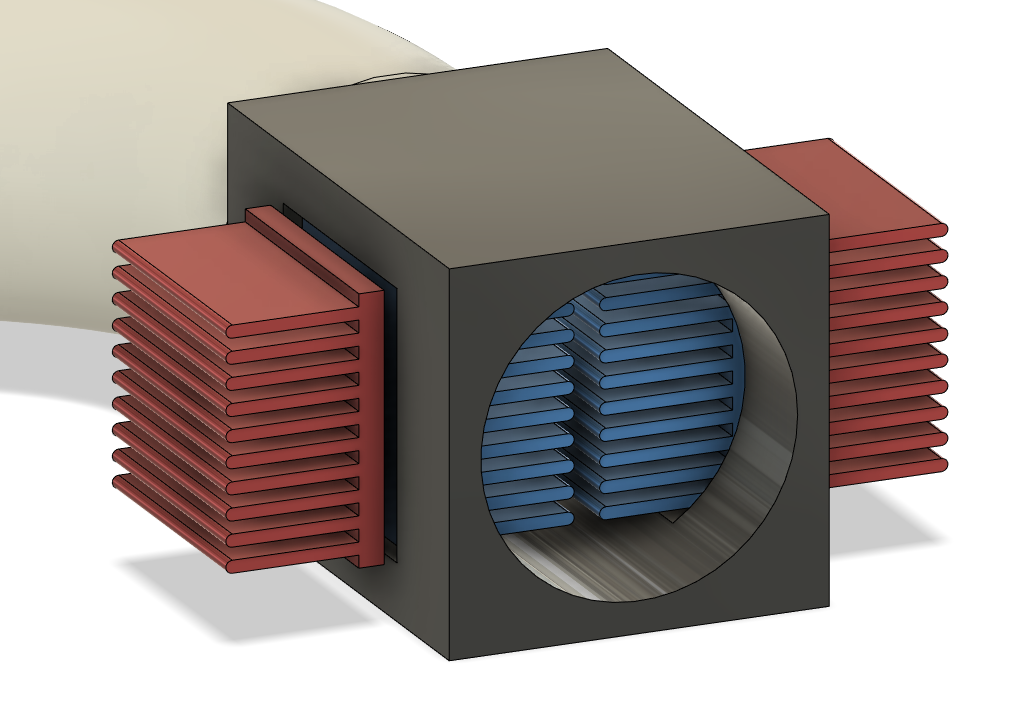 For cooling the printed object:

What seems the most practical is to use an air compressor with a tank large enough to ensure that the air in the tank has time to cool off. This gives you the option of adding an air dryer if needed. You could cool the compressed air just before blowing on the print though a Peltier cooler and get additional cooling as the air releases toward the print.

You could put a Peltier cooler on the ceiling with a heatsink/cold-sink covering most of the inside ceiling and fans only on the external (outside the ceiling wall) heated part of the Peltier. Convection would move the air. Without and enclosure, positioning the Peltier to use convection would be good because the fans, especially those removing the heat would not be fighting convection.

You could use a Peltier cooler to both heat and cool the print bed. All you need for stitching is to change the polarity of the voltage on the Peltier. A Peltier could handle those temperatures well. While Peltier heaters/coolers aren't energy efficient, because they can do both, they have good and quick temperature control.

If you wanted to get fancy, you could have multiple Peltier devices across the bed, so that you could keep heat under the print and have all the other devices cool. You would need to know the fastest rate you could change temperature without cracking the glass on a glass bed.

Cooling the heat sink on the extruder. (answering a different question)

The most practical way to use a Peltier cooler is to take advantage of its temperature differential over a short distance. One could put it between the heater block and the heat sink, requiring a hole in the cooler for the filament to feed through. The Peltier effect has a limit of a 70°C maximum differential between the hot and cold side. Another limit is manufactures list a maximum temperature of 200°C on the hot side. This is usually because of solder joints.

Its main advantage would be a fast drop in temperature between the heater block and heat sink. However, it is an expensive project, and one needs to evaluate of this could be better achieved by other methods. 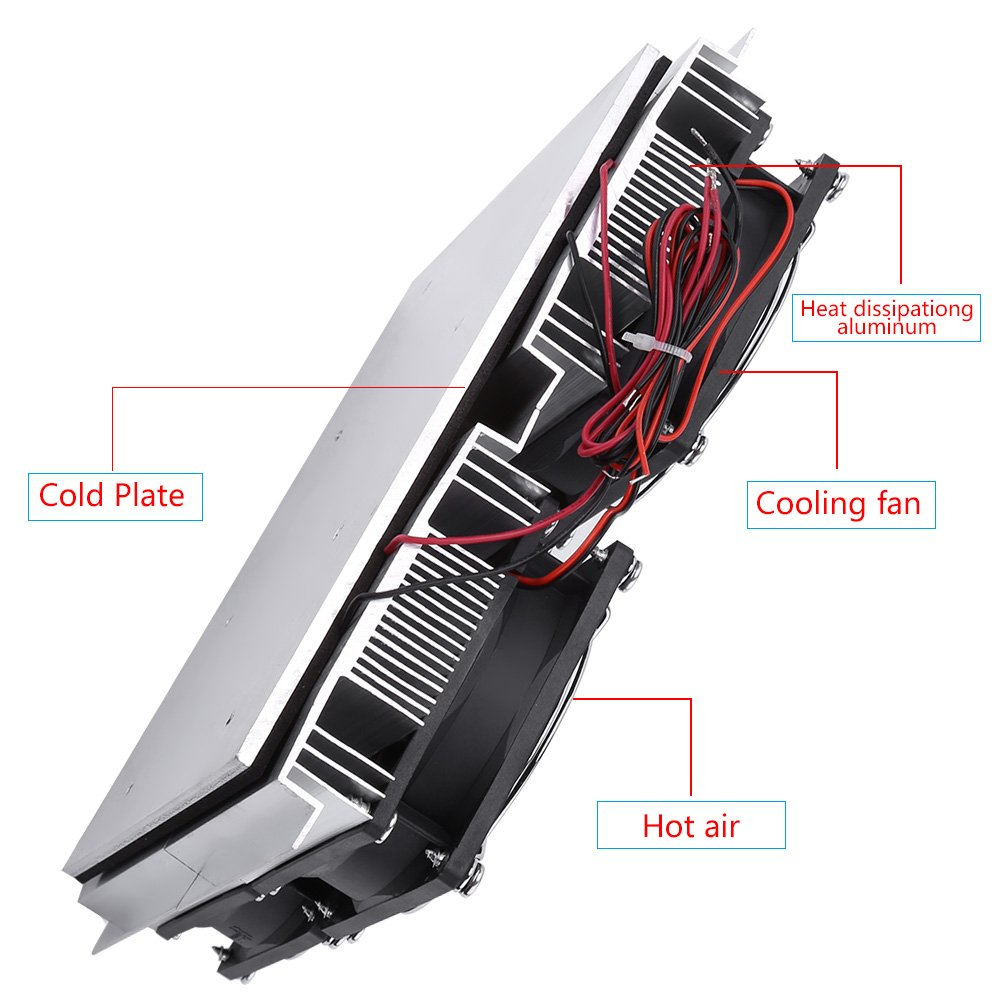 It is true that if you try to do bridges with a very hot filament the cooling air will deform or push away the hot filament if it's set at high speed, or it won't cool it enough if you run the fan slower.

I experienced it with PETG at 245 °C while performing a parametric optimisation as described in:

Still, the TEC are inefficient and they require a bulky heatsink to cool the hot side. Not only that, you also need a heatsink with thin fins to cool the air, which cannot be too small too because the air is flowing relatively fast.

Overall, it's clearly not practicable so I doubt you will find studies to confirm what is obvious.

Not the answer you're looking for? Browse other questions tagged cooling or ask your own question.

8
Cooling for big layers
6
Cooling fan noise when head is moving in the X axis
7
Why does my part-cooling fan cause stringing?
1
Unable to hit hot end temperature with part cooler on
4
Part cooling fan on when printing TPU?
2
How to find correct part cooling fans?
1
All-metal hotend, cooling fan failures, and cold-side PTFE
0
Can I replace the cooling fan blade for the hot end on creality ender 3?
3
Calculating suitable pressure for compressed-air-based cooling