I am trying to 3D print an iPhone case, however, I want it to print standing up. Is this possible to do?

I have a picture of the case in the link below. 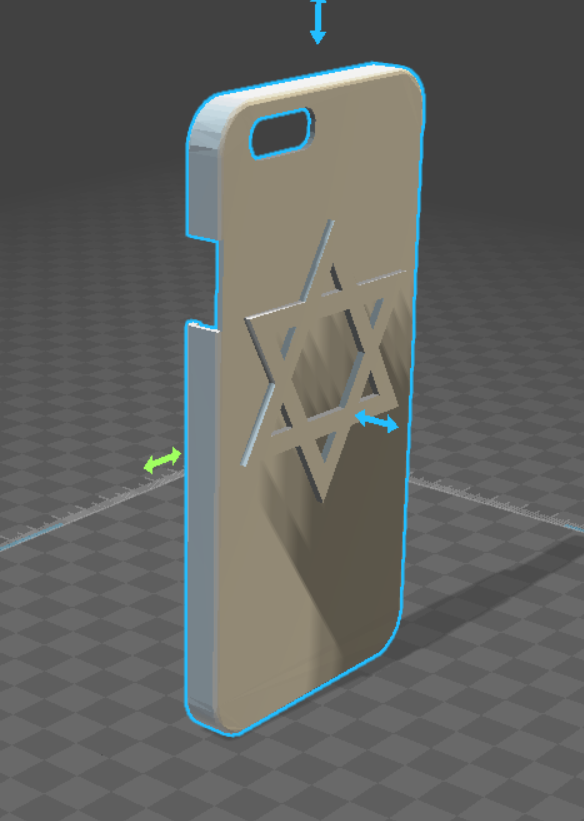 Yes this is possible. For an FDM/FFF printer, you'll need to print with supports. I might also recommend printing in PLA to minimize the chance of warping during the print (from experience).

It might also help to slow down the feedrate to ensure smooth surface finish and avoiding delamination on such small layers.

You'll probably see a decrease in the surface quality on the inside due to the printing of support scaffolding depending on the slicing engine you use.

You'll want to pay attention to the strength of the case. If you print the case upright then it will be more susceptible to breaking without post-processing.

Ultimately, if you can get away with it, it would be better to subtract the star instead of extruding it in the model. Then you can simply print the case back face down on the plate with much better results.

Not sure if this should be an answer or a comment, but not quite enough rep to comment, so... Here's an off the wall suggestion: As an alternate approach, assuming you're using FDM printing, could you print it with the star down on the bed in more than one step?

I've never tried this, so I can't offer assurances. The two step print, with the first star in place and the rest of the case printed after filling the empty space probably won't work if you need a heated bed, as for ABS.

Carefully considering this model, It would be wise to print this on the back-plane with support and then post-process the print to prevent the walls separating from the back when dropped. By activating support, the proposed orientation is however quite possible. To reduce the chance to destroy the print, one has to choose the right support material and geometry. In this case, a soluble support (PVA) would be best, but choosing a proper support structure like tree support originating from an area in front of the case reaching in, for example, generated with Meshmixer is also a very good solution. The orientation that is shown by OP actually has a very nice ability to hold onto the phone from the C-shaped cross-section. However, again this does demand some post-processing to strengthen the inter-layer bonding, preventing the case to split into an "upper" and "lower" section when dropped.

Post-processing could take the shape of baking the part in the oven for about an hour to strengthen the inter-layer bonding. For PLA 90 to 100 °C in the oven is common, while ABS is a little higher.

ABS would allow a quick acetone vapor smoothing, which melts the outer layer lines together smoothly and as a result increases the shell stability a little - you have to let it outside to let the soaked in vapor fully evaporate afterward though and you might lose smaller details.

You have a few options. First. I would change the design. Why not make it negative space instead? Else as the other user mentioned, glue the star on later.

Other options are, come up with a modular design so you do not print it as one piece.

You could print it with normal support material, with the star up, and just accept that the left overs will scratch the phone, or spend a lot of time with some hand tools and sand paper.

Another good tip is to add some model supports directly into the model that you can just break off. Like some wings in an X along the corners of the case. So pressure is exerted more evenly across the case as it's being built. Using a big Raft will help too.

Consider printing in other planes - this model would be very suited to be printed at around a 45° angle.

You will need support beneath it, but all visible surfaces should exhibit good quality as well as being more robust than when printed upright due to layer adhesion as pointed out by other answers.

Not the answer you're looking for? Browse other questions tagged 3d-models print-quality or ask your own question.

5
stl files -measuring stl files
7
Can a 3D model of a copyrighted work be rendered legally without infringement?
1
Print not coming out good
8
How to print a two color part with only one extruder
3
How to edit G-code created in Cura to begin printing at a specified layer height?
2
Hollow wing for rc plane
4
Is it possible to know which is the correct temperature range and speed for any model?
4
Set the overhang parameter in Blender 3D printing tool box
2
Why do my prints have such a rough surface? (Taz Lulzbot Pro)
1
Issues with print Prusa i3 infill breaking and causing clogs