Context: I'm trying to move between the two coordinate points while dodging an obstacle by arcing the Z-axis movement. I am trying to do the motion on command to be able to operate faster. Using GRBL 1.1 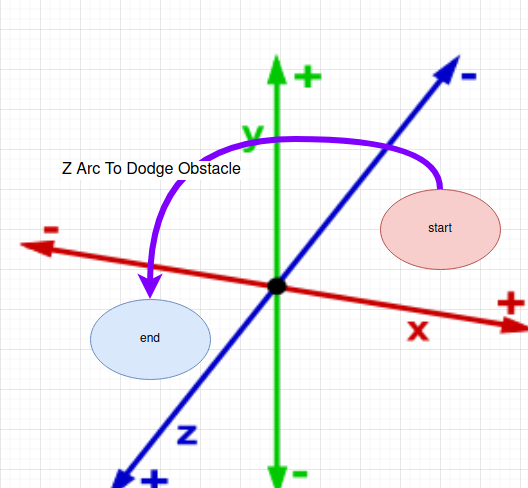 This should be possible in GRBL 1.1, see examples below.

Disclaimer: I have never used neither GRBL nor arcs (G2, G3) in practice.

Support for arcs in G-code

In general, in IJK variant where the arc is described by three points (starting, end, center) anything seems possible, including the rainbow-like moves. I imagine (I,J,K) coordinates as imaginary arrow's nock for bent bow. By moving it around, you will "reshape" the bow as needed. I actually found similar CNC Arc Programming Exercise, including:

Support for acrs in GRBL

I found similar question in Duet3d forum: Caution! - STL Resolution. There is a sentence:

On GRBL you get some planar support (pick any two axes, eg XZ, but not three). (...) Some controllers even implement a helix mode.. but no standards exist.

So the support in GRBL may be limited. However this comment seems to be in condtradiction to the official GRBL README.md, saying:

I leave a practical proof to you now.

Not the answer you're looking for? Browse other questions tagged g-code or ask your own question.

23
Is there a G-code for waiting?
6
Editing arc in Marlin for 3d printing
3
G-code (M-code?) for Get Bed Temperature
10
What is G92 used for in G-code
3
Any code to move up Z axis after finishing the printing?
8
Run custom code between g-code commands?
4
Software for 3d model to arc/curve gcode?
6
G-Code for resetting to 100% speed
6
How to post-process G-code to make prints faster using splines and arcs?
1
GRBL with low feed rate not working