I manage four 3D Printers for my college's robotics team. They are used pretty constantly throughout the school year; that is, they are used more as manufacturing printers than hobbyist printers. The environment they are in is less than ideal: The outdoor climate is typically cold and has low humidity, and the room they are in has fine dust particles that are less than 80 microns diameter and have electrostatic properties. The room's temperature also fluctuates week to week. As such, static electricity is fairly common in that room.

What effects does static electricity have on our 3D printers? I have had numerous problems recently with a motherboard with resistors that failed and another printer with an unknown issue that we suspect also has to do with the motherboard. Could the static electricity be causing these or other issues, or affecting the quality of our printed parts?

We use ZylTech filament, and print using a Creality Ender 3 Pro, CR-10S Pro, Ender 5 Plus, and a FlashForge Creator Pro. The dust particles mimic "regolith", or lunar soil, that comes from one of our team's test facilities.

Static electricity is detrimental to nearly all electronic devices. A stray zap from touching the frame of your printer could migrate to the controller boards, terminating normal operation. If you wish to protect the printers from static electricity, connect the frame to a confirmed electrical ground. The power supply may be grounded via the electrical cord, but you'd want to ensure that the entire structure shares that ground. Additionally, provide a grounding strap to which an operator would connect prior to using the machine. Image below courtesy of linked site. 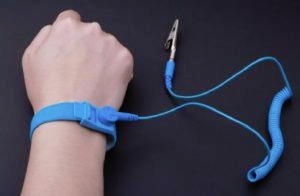 The more unfortunate aspect of your description is the issue of particulates in the air. Moving parts will be subject to excessive wear and your printer has plenty of moving parts. The stepper motors may "ingest" particles and the fans on the power supply will certainly pull in abrasive dust. The rails and bearings are going to be collecting as well.

One could use the reverse concept, that is, build a box from filters and have a fan suck the air into the box, into the fan and back out into the environment. This would provide for a greater surface area of filter material, reducing the frequency of filter changes. In the first example, the box is created from a solid material and the fan forces air for cooling, into the box, as dust-free as the filters will allow. In the reverse method, the box is created from filters and the fan is used to move air from the box to the outside, pulling clean, cool air into the enclosure.

It sounds like a tough place to be a 3D printer.

Static electricity does not affect the printing process but it can destroy or disrupt the electronics of the system. The dry air environment is really good for the printing process because keeping moisture out of the filament is one of the most important concerns for a good quality print. Dust is the other. If you can find a solution where the filament is drawn directly from the dry box; that would be best. (I am assuming that you have a dry box ;)

One problem that can occur in especially dry environments is static build-up during printing. A 3D printer can become a mini Van de Graaff generator with static being generated on the spool, being transferred to the nozzle. Normally this is a very rare problem but it sounds like your environment is very dry. You should try earthing the nozzle. Determine a spot on the cold side of the hot end assembly onto which you can connect a wire to earth, and ensure that it is connected via a very large ohmage resistor (100Mohm). This should keep static away from the stepper which should keep it away from the controller.

Regolith is one of the worst stuff known to man that could accumulate on electronics and moving parts. NASA replicated Regolith and has a manual. Researchers studied Regolith as a 3D print material - and found it can be used. We even have the formula to make Concrete from it by adding water and refined regolith or even dry refined regolith.

Also, we understand how Regolth behaves electrically. It's not a good conductor in the dry state but at least a conductor. However, just a little water rapidly changes that and makes it a rather good conductor! Tiny amounts rapidly increase the conductivity, making it very dangerous to electronics in combination with dew - which happens in low temperatures.

Dust on bearings gunks them up and then starts to grind away the rails.

Dust on filament gets pulled into the hotend and can create clogs.

So, it's rather clear that we don't want this regolith-dust on our printers.

You immediately need to take measures to prevent dust from accumulating on the electronics and secondary on moving parts!

If possible, housing the electronics in a dust-sealed box would be preferential, but housing the printers as a whole in an enclosure might mitigate most of the trouble for the start.

The most simple enclosure that would allow for such would be a simple large wood box, provided that the door contains a seal. For fire protection and to reduce the risk of one spot of the housing getting too high, the inside air should be constantly mixed, best by some sort of permanent running large fan. For further protection, the setup needs to be vented at least when the internal temperature gets too high, allowing to use of the heat of the printers to stabilize the internal temperature - and best even log it.

A venting-trigger temperature should be below 100 °C air temperature, better even 80 °C. But how to reduce the temperature?

The easiest cooling solution is to intake air from the outside, but we need to get the dust out of that. An easy solution would be a HEPA-filter unit. There are permanently running types, that would keep the printer-box(es) under over pressure compared to the atmosphere, keeping the dust from creeping into the box, but that doesn't give us control to heat the chamber if it gets cold.

But we could salvage an old printer board for that! Setting up the thermosensor in such a way that it measures air-temperature is easy. Using the bed and/or hotend exit of the board to some sort of heating element with grids at the filtered intake should be doable, evening out the temperature in the printer box to a minimum safe temperature.

Not the answer you're looking for? Browse other questions tagged print-quality electronics or ask your own question.

4
Dual PSU with one switch fuse
4
What are the specifications of the dual voltage controller of the Ender 3/CR-10?
3
Makerbot Replicator (5th generation) poor print quality
1
Gaps/Holes in the 3D Print walls
0
First few layers are now printing very badly
1
Sudden deterioration of print quality on Prusa i3MK3S+
3
Why does Cura default to printing walls so slowly?
1
Pin layout of RAMPS Plus2 board?