Here's an idea of what's going on. This is a picture of the progress during the first layer: 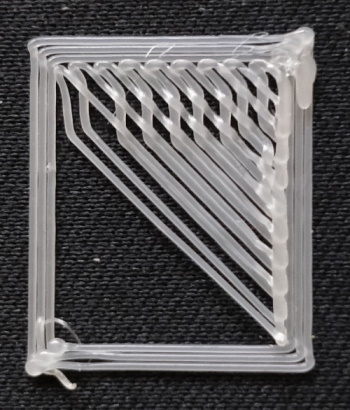 Printing a simple calibration square, and as you can see, my X-axis is not moving like it should. I turned my speeds down from 30 mm/s to 5 mm/s and this is the result.

And this can be seen on the diagonal lines. Y moves constantly, X lags behind so it creates those vertical lines.

No idea what's causing this and causing a bit of a headache.

Getting this far was already a pain and now I'm kinda stuck.

Browse other questions tagged print-quality stepper motor axis or ask your own question.

5
What is causing these artifacts when the extruder moves in one direction?
4
Marlin acceleration issue on corners
6
Z-Axis does not appear to be working on Ender-3 Pro
2
Steppers don't work as expected while printing
3
Replace X axis motor with different model
3
Visible lines along Y-axis on Ender 3 Pro
3
Why the Ender 5 Pro can't remember the axis position or cant move back to home anymore?
1
Strange behaviour x and y axis - corner of print
0
Stepper motor moving only to one side after reset
1
Big permanent layer shifts on X-axis, looks like something is holding the stepper motor but its not