I want to be able to run my Chiron during night-time, but my neighbours tries to sleep at that time of day. I have put a lot of effort into making the printer silent. The controller-fan and power-supply-fan now run slower and only when needed, I have put the printer on those damper feet found on Thingiverse, I have added rods to stabilize the gantry and I have switched to TMC2209 for X, Y and Z. I have made sure the TMCs are tuned for 24V and are using 'stealth chop' below 225 rpm (120 mm/s). The result is impressive compared to how noisy the printer was when I bought it.

One problem was not solved, when Y-axis moves at between 35 and 45 mm/s, the printer starts to loudly vibrate at 220 to 280 Hz. To mitigate that, I first tried to slow down printing, but then print quality was hurt by oozing. Now I have reverted back to my desired print speed, but limited Y-axis feed-rate in Marlin to 32 mm/s using M203 Y 32. It is quiet enough, but many movements are slowed down, affecting quality.

What can I do to stop or mute these vibrations?

ADDED 2021-03-30 I have no proper accelerometer, so I used a MPU6050 accelerometer and some code in an ESP8266. It samples roughly 400 times per second and gives a vibration-value that can be used to estimate the level of vibrations. It is not frequency-compensated, but gives a hint of what is happening. And it can be used to compare settings.

I also made a program based on an example in TMCStepper so I could run the stepper and see/change all settings. This program also relays the measurements from my accelerometer so I can make graphs.

To do this I removed the stepper from the chassis, as I need to be somewhat quiet when doing these tests. It looks like this: 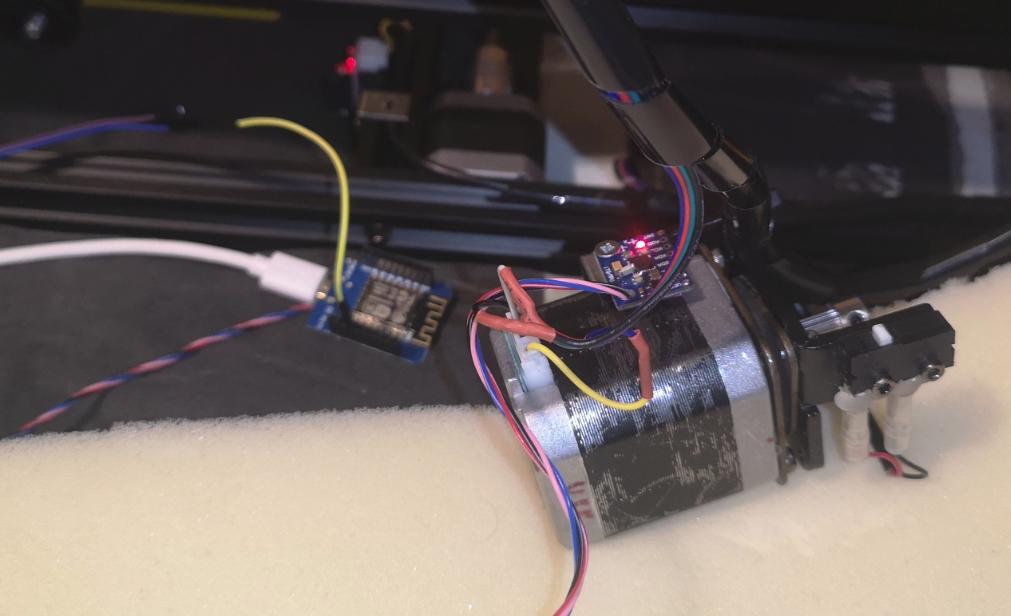 This graph sums up my findings pretty well: 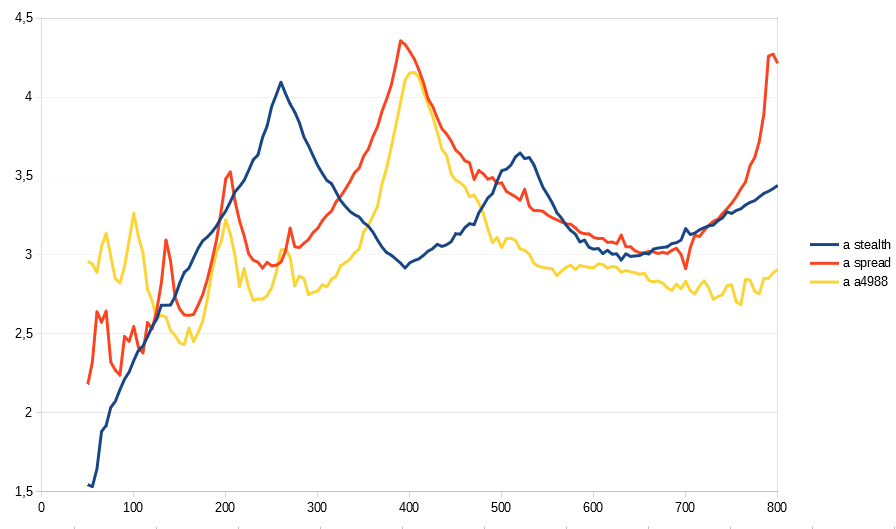 Y-axis is shown with the scale log10(accelerometer values).

Here are the TMC-settings I used during the tests, which are same/or close to what Marlin use for 24V Chiron: (TPWMTHRS was set to 0 when I tested StealthChop) 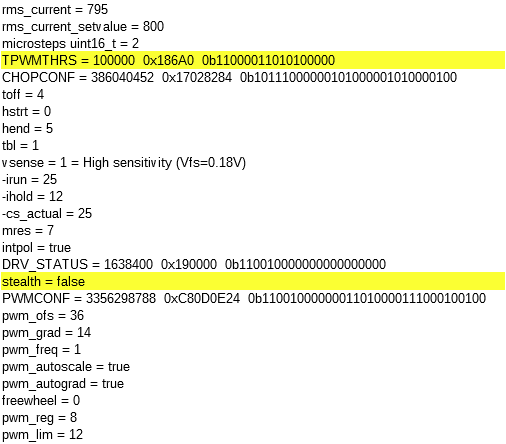 What I do not understand: Why is TMC2209 seems to be more loud at higher speeds. It might make different vibrations that my makeshift accelerometer rates worse, of course. But can I have a defective TMC2209? Or are the BigTreeTech boards bad? Or have I got fake TMC2209 with worse performance?

Have you tried a concrete tile for garden with foam below it?

The same is on

Frequencies at 200+ Hz should not get to the neighbours, the walls and floor will absorb them. Lower frequencies are transmitted much more (see the video).

Try that, it's super cheap, and if not enough let us know for further help.

I noticed that my TMC drivers make a loud KLANK sound when switching from stealthchop to spreadcycle. The solution is to keep the in stealthchop at all time by butting the threshold really high (I set mine to 1000 mm/s). You may also look for resonance in your frame. If you’re using Klipper, you can use input Shaper with an accelerometer to lower ringing, it will improve your print ans make your printer quieter at the same time.

Since you have already invested in reducing the noise of you printer:

Not the answer you're looking for? Browse other questions tagged bigtreetech anycubic-chiron .

1
AnyCubic Chiron shifting in Y axis
1
Prevent raising Z-axis after homing
2
Why would all of the Ender 5 Pro's axis motors (X, Y and Z) stop being able to move (all at once)?
4
Why are fast printed lines thinner?