What would cause magic smoke with a BLTouch installed?

I decided to purchase a BLTouch for my Ender 3 V2. I did all the physical installation of the BLTouch at the same time as adding LED lighting. I plugged in the power to test the lighting (BLTouch was not plugged in yet) and everything came on fine and the lights worked as expected. I plugged in the BLTouch, hot-glued it in place, and finished zip-tying and screwing in everything else back in place.

I connected power once again and powered on my printer. The fans came on, the new lights powered on, but the display didn't come on. I turned it off and back on, still no display. Then I smelled the distinct odor. I quickly powered off the printer and opened it up to look at the mainboard. I couldn't see any major scorch marks at first, so I decided to power it up again. That's when I saw the small spark and magic smoke at F2 in the picture below.

I feared the worst that I had fried my mainboard, but thought maybe it was the BLTouch. So, I unplugged the BLTouch and powered the printer on and miracle of miracles it powered on. All the fans, lights and display were on.

So something with the BLTouch is causing the short but I don't know what it is. YouTube videos that I watched for installation showed a different cable than the one that came with the BLTouch that I purchased. My BLTouch came with a 1 meter extension that is actually 2 sets of cables. One set is a pair of black and white wires that I deduced were for power. The other cable is a set of three wires colored orange, red, and brown. I zip-tied the two connectors together to make sure they stay together. On the BLTouch end, the orange and black wires are next to each other. The connector in the bottom picture is in the same orientation that I plugged it in. 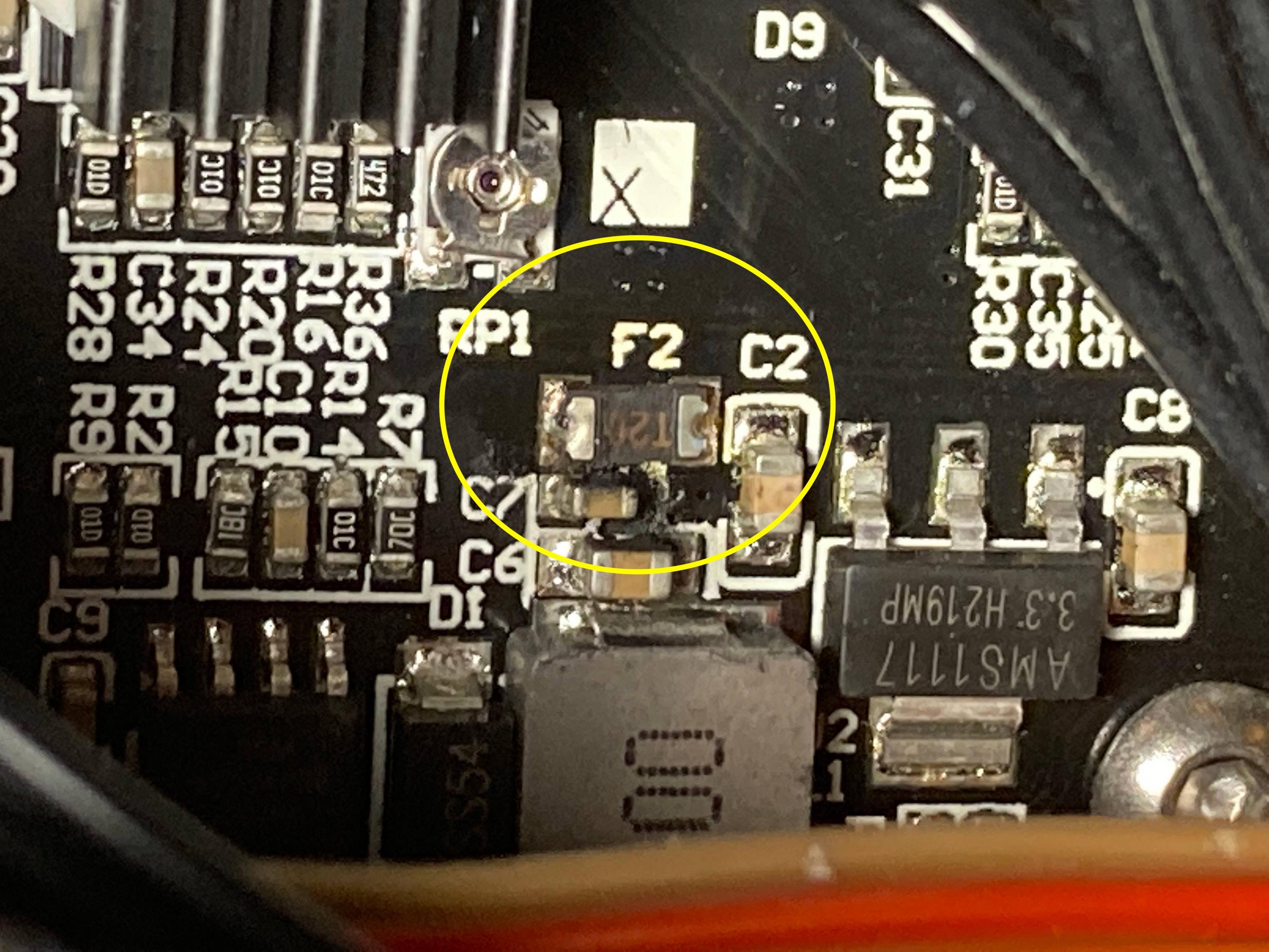 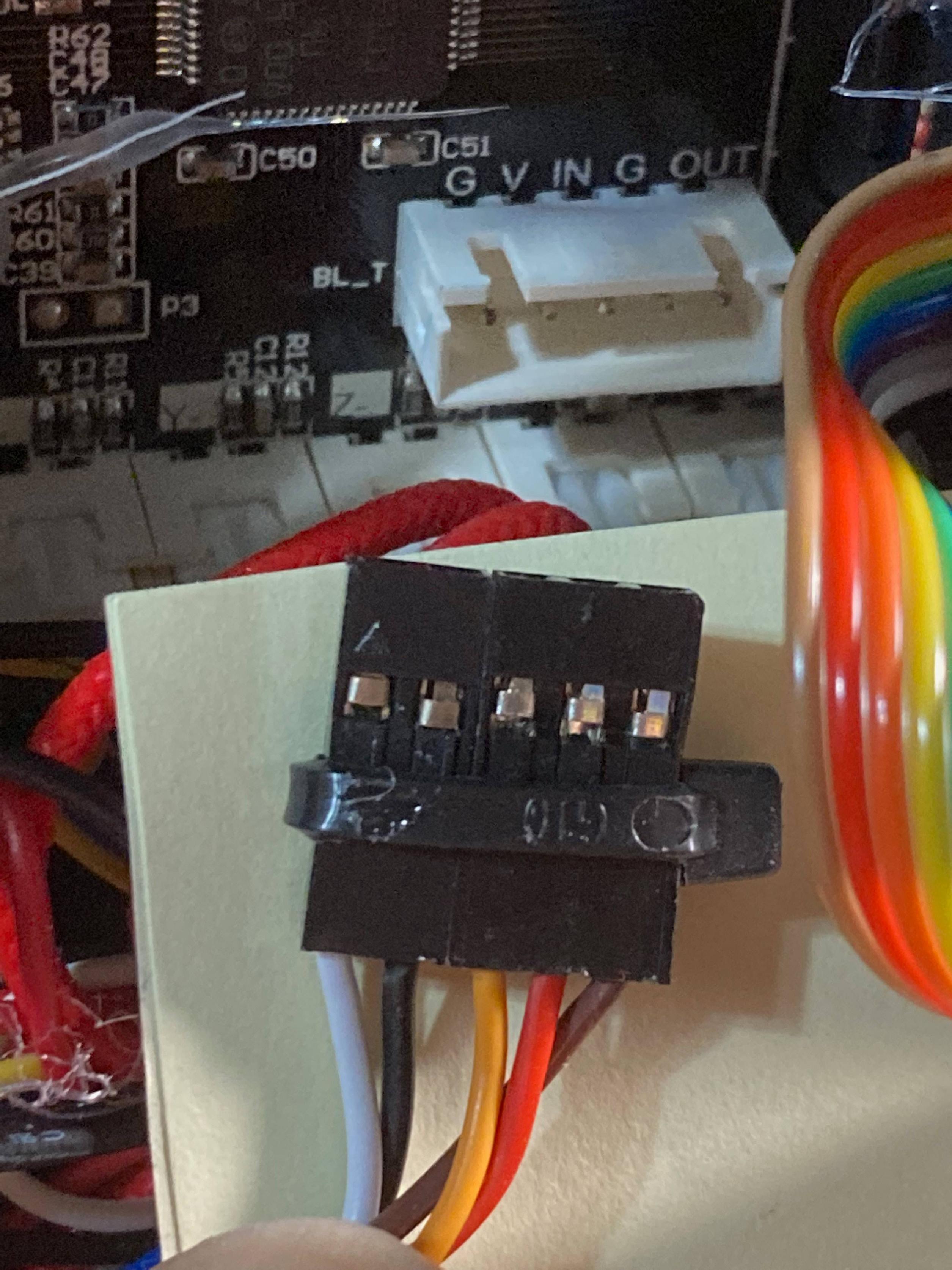 Given F2's proximity to the linear 3.3V regulator and some inductor and large diode possibly belonging to a switching regulator, it is likely that some short circuit caused the fuse on a power rail to blow.

According to wiring instructions and your picture (if you're holding the connector as it was plugged in, you had it reversed:

Black to the G pins

NOTE: Sometimes blue or brown are used for ground wires

Red to the V pin

Yellow/Orange to the IN pin

White to the OUT pin

If that is the case and the protection was well designed, swapping the cable and replacing the blown fuse should repair the fault unless it also damaged to probe.

As for identifying the fuse value for F2 (T20), different manufacturers, due to the size limitations of SMD components, unfortunately use different markings, but the T would indicate either 0.5 or 5.0A. It might be best to ask support about the value for the fuse as the manufacturer would surely know.

8
Anet A6 - First time assembled, won't turn on
1
How to connect BLTouch sensor to Alunar M508 using LSEE 3D v1.0 board?
1
How can I tell if BLTouch is triggering?
4
BLTouch not leveling
0
BLTouch Stopped Working
0
Z-min always open when using BLtouch and Marlin 2.0
3
Screen stays black on new Ender 3 V2 after power-on
4
Ender 3 Pro will not auto home correctly after mainboard & BLTouch upgrades
6
Ender 3 V2 blank screen and LCD continuous beeping with clicks
2
BLTouch clone will not deploy, stow, or deploy when homing or auto leveling