I'm throwing this out that as a long shot, as I'm not sure if anyone can help me, but maybe there's someone out there who had a similar issue and might have successfully dealt with this before.

I'm dealing with this: 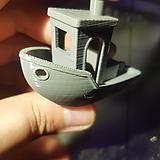 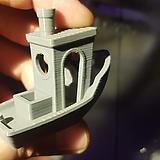 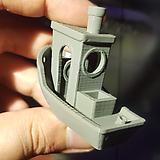 Granted, if I take a picture of the same benchy at a "flattering" angle it looks fine but the prints in real life don't look great. 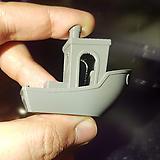 Setup and attempts to fix the problem:

I'm currently using a DD setup with a pancake motor, BMG extruder (Trianglelabs V2), V6 all-metal (Trianglelabs). Tried switching back to Bowden - fairly similar results in terms of the problem I'm having, the quality itself is a bit different compared to DD, DD being more. "tight" I guess would be the word in terms of quality, but the layer stacking is still similar. Tried using a metal "stock" style extruder on Bowden - the overall quality was just trash compared to DD and the issue still remained. Tried using a PTFE lined hotend instead of all metal on the DD setup - surprisingly the print quality overall was worse with it compared to the metal throat, so that leads me to believe the Trianglelabs throat is of decent quality and isn't the source of my problems like with cheap metal throats.

Designed my own DD mount in hopes that not having the stepper motor hanging far away from the extrusion would perhaps result in less hotend "wobble" during faster moves. Didn't help at all, although I do like it and it's more rigid compared to another popular one I was using before. 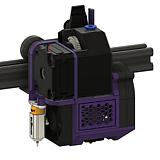 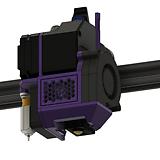 Tried multiple slicer settings, these are the ones I'm using now for reference

I'm a bit lost on what to try next, I think I've tried every combination I could think of in terms of settings, tightness, etc. My only thought is maybe it's in some way related to the leadscrews as they are the only thing I haven't changed. Although I did flip them over AND swap sides yet that made no appreciable difference which makes me second guess myself if my leadscrew theory is correct.

Maybe I'm missing something obvious, I'm just tired and frustrated from spending days in advanced yoga positions dancing around the printer with nothing to show for it.

I'll be delivering a crap ton of benchies to an orphanage or something, hopefully, the kids will have some fun with the stacks and stacks of benchies I've been printing for the past week.

Browse other questions tagged print-quality extrusion creality-cr-10 mechanics or ask your own question.