How to define bed dimensions in Marlin for custom carriage / hot end?

How would I begin measuring my hotend / carriage dimensions in Marlin to prevent my hotend from slamming into the frame?

I see in Marlin the 'define bed size' parameters

But how would I go about measuring my hotend / carriage assembly to edit the values accordingly?

I'm not sure how I would measure it or at what point of reference I'm measuring from, is it from the nozzle to the edge of the hotend carriage in both the X and Y or total space on X and Y.

I have a custom-made aluminum hot end carriage for my E3D Hemera.

I defined the BLTouch probe offset.

I'm using "Tiny Machines" firmware and my next step in the installation is defining the aforementioned parameters. In the video tutorial, I'm watching for installation they are using a different mount for their E3D Hemera, so I'm unsure how I would go about defining my own values for my setup.

The guide I'm following is here

I also moved one of my end stops closer to the carriage because my original endstop would trigger on the wheels, but now that I installed the new carriage, it hits the frame before triggering the endstop, is there an endstop offset value I can adjust for what I think is my Y-axis?

(The axis going from left to right)

Using a larger carriage will, if too large, diminish the printing area.

To determine the correct values (for the X-axis) you:

The text below goes a little more in depth, first some definitions, then some theory.

Axes
In reaction to:

The axis going from left to right

When facing your printer the left to right movement is your X-axis, back and forth the Y-axis and up and down the Z-axis.
-> Please note this is generally the most used printer convention, exceptions are applicable.

Dimensions
Hotend dimensions are needed for your slicer (when you need to sequentially print multiple objects), firmware uses bed dimensions and positions.

The following image reflects the changes to the build area when a larger sized carriage is used on the same printer (grey is the original size, red is the decreased area as a result of a larger carriage; note this is for fixed endstop positions!). Note, this is an example, CoreXY machines have limited space, so a decreased print area is more likely to be seen in both X and Y dimension. Prusa i3 style printers have the Y endstop generally on the bed carriage, so the bed size in Y will most likely not decrease. It totally depends on the construction of the printer, the extra space between the frame parts and the carriage (usually you can see that instantly by the endstop offsets, if there aren't homing endstop offsets, there is not extra space and the print dimension of that axis will decrease) or the ability to move the offset. Note that the bottom half of the image draws the out the result for losing X movement, the red area does account for losing Y movement as well, this is not uncommon for CoreXY, especially the printers with limited extra space for the carriage beyond the minimum and maximum bed positions. 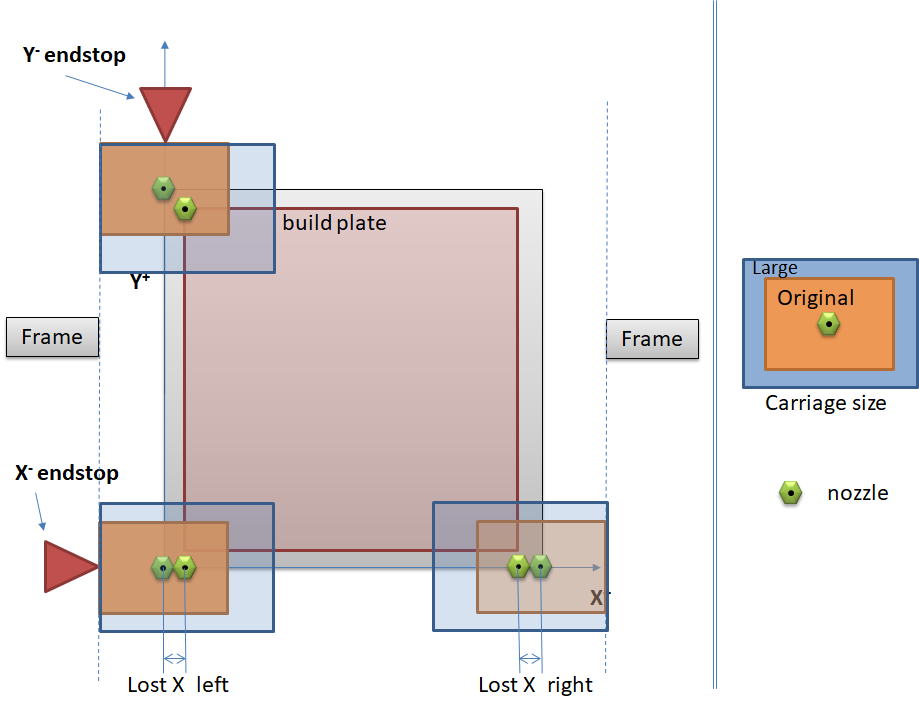 How does this translate to your situation?

This tells you that there is no offset from the homing endstop.

This tells you that there is less printing space in the X direction available.

From Marlin configurations (2.0.9.1), you can find something similar. It looks like somebody did a similar attempt, but added the offset to the X_MIN_POS and mixed up the signs (it does hint to a 8 mm offset, so the creator probably also has a e3D Hemera extruder).

From the TM constants we read that the endstops in fact define the origin of the printer to be at the endstops (the MIN values are zero) so the printer is at the origin when homed. Because of the larger extruder, already 8 mm of the X dimension is used, hence the smaller bed size of 306 - 8 = 352 mm. This is also the X_MAX_POS, the carriage is not allowed further. You should now look into your custom mount and the endstop location and deduce your own "x mm" offset.

Not the answer you're looking for? Browse other questions tagged marlin troubleshooting hotend creality-ender-5 carriage .

11
How to center my prints on the build platform? (Re-calibrate homing offset)

4
Anet A6 Z-axis min endstop not triggering
6
Setting custom x/y bed bounds for Anet A8/marlin
3
Hot end considerations for 300+ °C and greater than 1 mm nozzle size for polycarbonate
2
Remove broken heatbreak
3
Where to define grid for bilinear levelling in Marlin
1
Upgrade hot-end to achieve higher temps (e.g. for PETG)
0
Can I replace the cooling fan blade for the hot end on creality ender 3?
3
How to add custom physical buttons to a 3D printer in Marlin software
1
Stepper motors on the extruder and Z-axis seem to freeze up during any fast movements