BLTouch clone will not deploy, stow, or deploy when homing or auto leveling

I have 2 printers, an Artillery Sidewinder X1 and an Ender 3 that both have BLTouch sensors installed. This post is about the one (BLTouch clone, the probe is a Smart v3.1 sensor) installed on my Ender.

I recently upgraded from Creality's original motherboard to the BigTreeTech SKR mini E3 and touchscreen. Once I had plugged everything in, I flashed the latest firmware with edits made only to suit my BLTouch. I am using the Zmin endstop pin rather than the dedicated BLTouch pin and I double-checked both my wiring and my firmware to make sure my changes were correct. I powered on the printer and everything worked. I even printed a test calibration cube. I was happy with myself for getting everything to work first go and screwed the lid back over the motherboard.

Upon restarting the printer, I tried homing it and the probe would not deploy, and if I did not switch the power off, the extruder assembly would drill into the bed. Using the 'Deploy', 'Stow', and 'Test' buttons do nothing. Running G29 or tapping the ABL button on the touchscreen will return similar results to pressing home or running G28, where the probe will not deploy (or stow if I manually pull it down - note that it does not go into error mode when I do that) and crash into the bed.

Things I have tried already:

I used this diagram to wire the sensor: 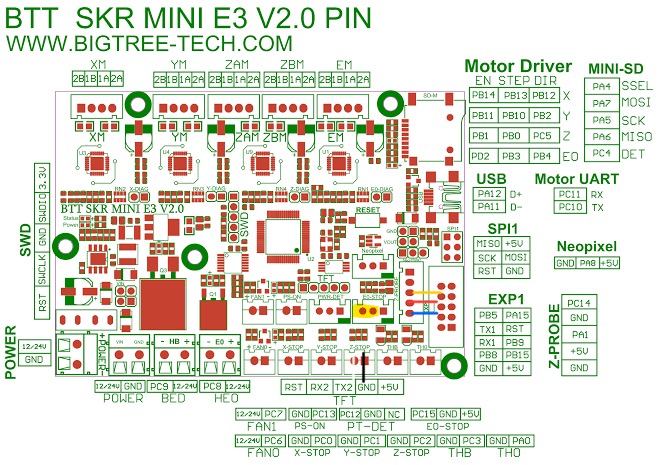 So I am just about at my wit's end with these BLTouch (clone) sensors - with 3 separate posts on this forum regarding them, my own posts even showing in the 'Similar questions' box at the time of writing this post, but amongst all the frustration I have experienced, I have learned a great deal along the way, from the core workings of the firmware to the design of the motherboard.

4 months later and I still never solved the problem. It seems likely that is a wiring fault or something wrong with the firmware but I have checked the wiring countless times with a multimeter, testing the BLTouch with another printer and using pre-compiled firmware sent to me by BTT support. I am writing to BTT to see if I can get a replacement board but if you have any other ideas I would love to try them.

You have written in the comments that

And that you tried

testing the BLTouch with another printer

It seems from these statements that the answer to your question is: something got damaged in the SKR board. Replacement is probably the only way.

There are however some home made optical/servo proves you can use instead of the BLTouch. They deploy a pin via a servo and use optical endstop for detection. They are reliable and require minimum wiring so that you can reuse the damaged SKR.

You can also try the quickdraw probe by Annex Engineering.

Not the answer you're looking for? Browse other questions tagged creality-ender-3 bed-leveling bltouch z-probe skr-mini-e3 .