Everytime I export to STL in Fusion 360, a new Version (V1, V2, V3, V4, ...) of the file is created. But I would really like to use that feature to mark bigger changes instead of creating a new version everytime I change a minor detail to see how the Cura reacts to it.

For some reason, no new version gets created when I send the model to Cura via the tools tab. But then no new STL file gets created, but Fusion 360 opens a new instance of Cura instead. Even if Cura is already open.
That's not what I want. I want to overwrite the old STL file so Cura offers me to reload the STL file and I can keep working in the instance of Cura which is already open.

I already deactivated the checkbox to create a new version everytime I save the file. That settings works as expected

Not sure if this will solve your issue directly for you but when I save a STL/3MF from F360 I don't use the File/Export in 360.

Instead I just right click the body in the browser tree and save the STL/3MF directly from that menu. Select "save as mesh" This does not add any version number, and also the usage of cloud processing is not required so it's much faster. 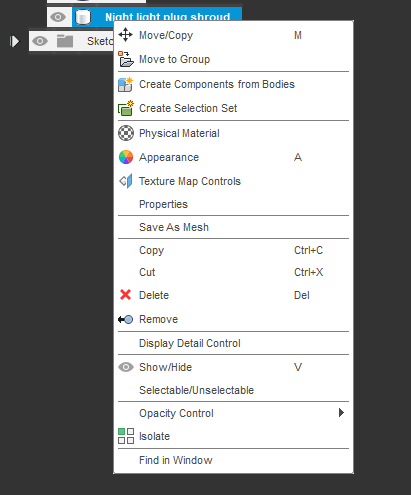 Not the answer you're looking for? Browse other questions tagged stl fusion360 or ask your own question.

5
In Fusion 360 how do I select an entire 3D object, not just its sides or faces?
7
How can I create PNG image files from STL files?
5
What is the point of diminishing returns on the STL refinement level in Fusion 360 on an Ender 3?
2
How do I keep the .stl files from being resized while exporting?
1
Export Revit file for Fusion 360 3D Print
4
How to estimate the printing time of a 3D printer from an STL file?
1
How can I become a certified Fusion 360 user?
1
How to add a proper fillet to corner of a cuboid in Fusion 360?
4
Will I still be able to export my Fusion 360 models to other CAD packages after Autodesk's recent license changes come into effect?