Improving durability of a printed propeller

I am currently working through various different iterations ofccreating a propeller for a model ICE (nitro engine). So far I have managed to disintegrate each of them eventually. I have been experimenting mostly with PLA and PETG so far. I am currently thinking about using carbon-infused PLA or using PC (I found one that is printable on my printer). However, I am not so sure what properties I exactly have to look for when it comes to a propeller.

I am making the following assumptions:

So far the PLA propeller has held up the longest and I cannot rule out that it accidentally touched something when it broke. That is of course something it does not have to be able to handle, so I am probably going to give PLA another chance.

The PETG propellers all literally broke apart the second the engine started, and it did not even hold up one rotation.

The design of the propeller is actually sacrificing some aerodynamic efficiency in order to make sure there are no "thin" parts. It is typically breaking in the section I have highlighted in the the following picture. 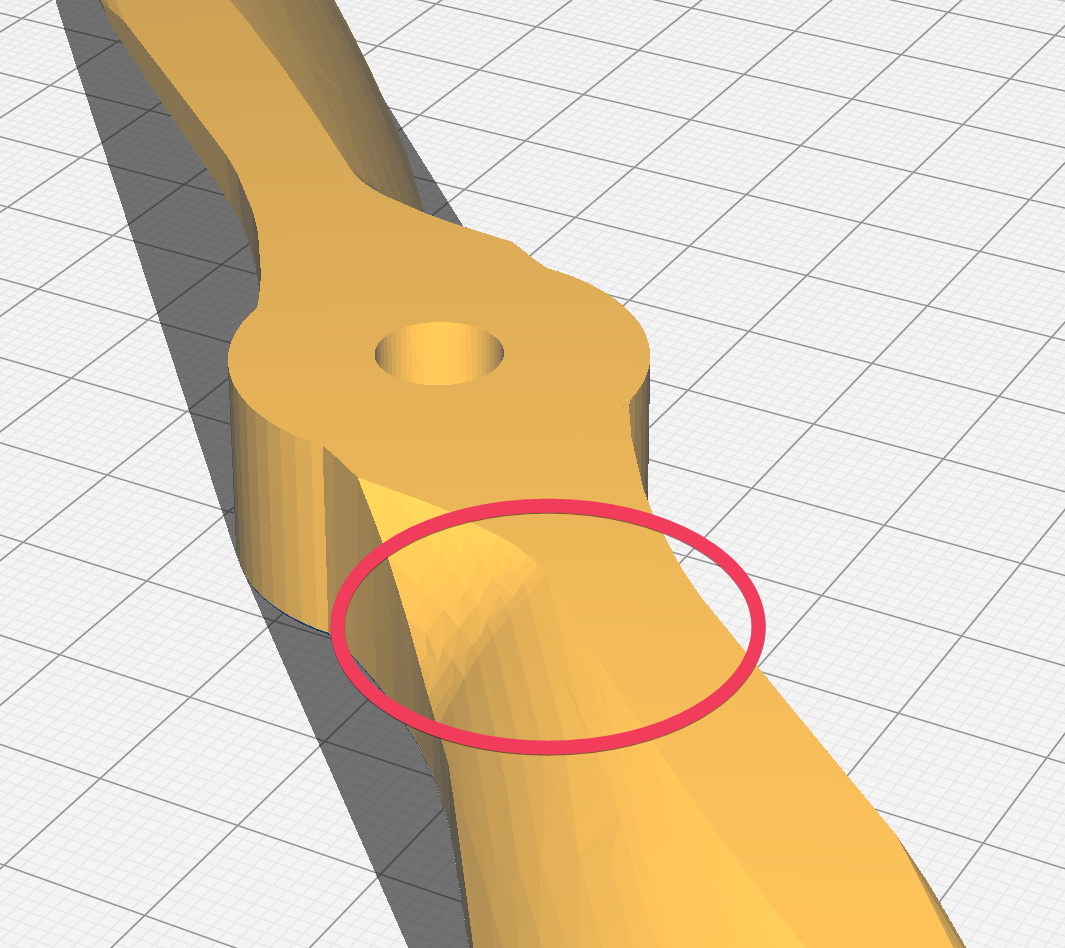 I have also a picture of the "remains" of the broken PLA propeller. It actually held up many runs before it eventually broke. It actually partially delaminated the entire wall. 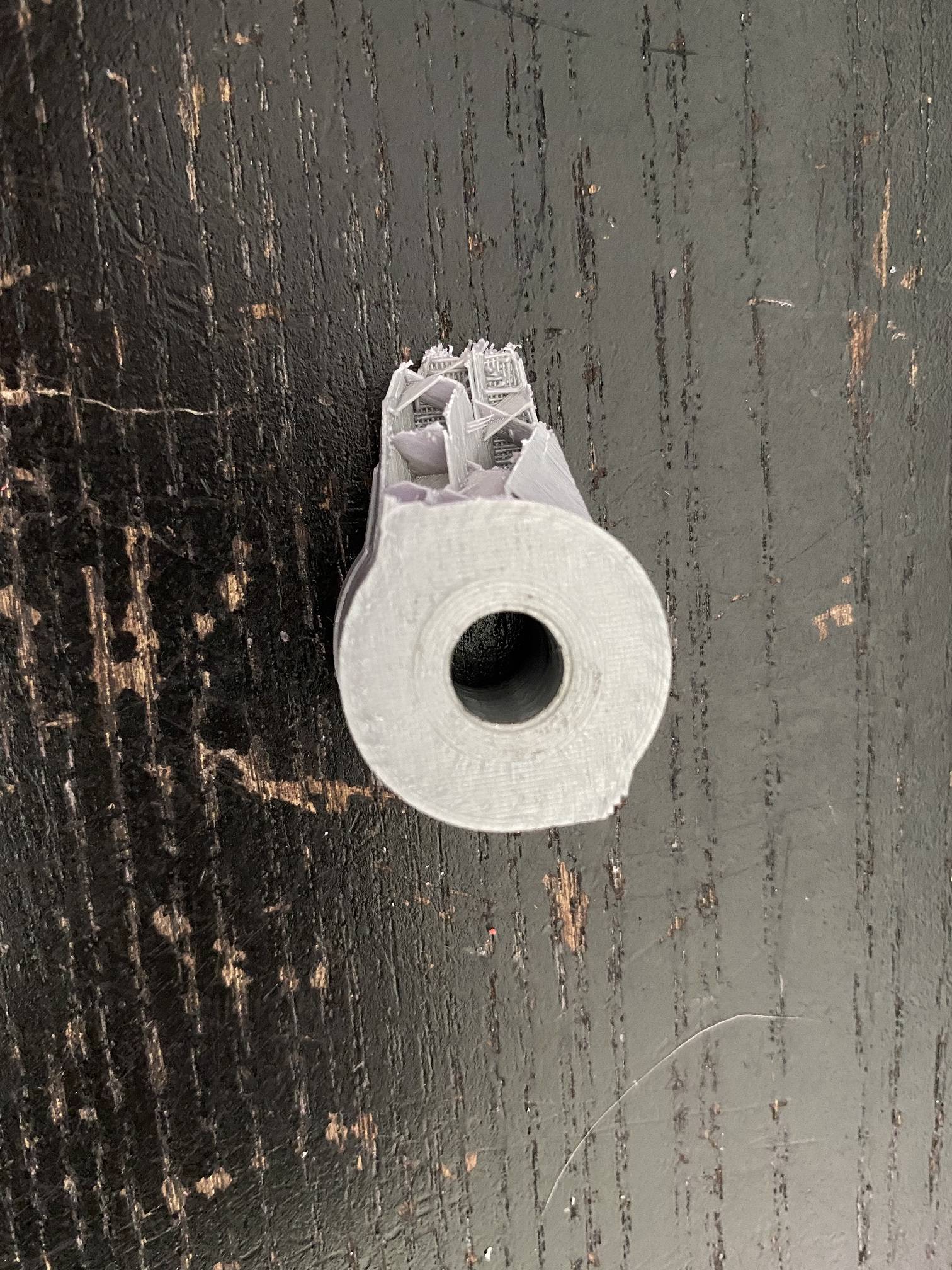 I am looking for two recommendations/tips:

As Kezat noted, your part has very low infill, but infill is not what provides most of the part strength anyway. From what I can see of the broken part, it looks like you only have 1 or at most 2 walls, and these are what contribute most to part strength, especially in the orientation you're working in.

You should probably increase the number of walls to the point where the part is entirely solid, and has no infill region in any layers. This gives much better strength than selecting "100% infill", which will normally use alternating diagonal lines to fill the region; even if "concentric" is selected, which "looks like" more walls, there are subtle reasons it's not quite as good.

You may be able to get away with fewer walls, possibly just 3 or 4. If you're trying to keep total mass low, that might be worth trying first. But you definitely need more than the 1 or 2 you have now.

I'm offering a different kind of answer, please do not print your propeller blades. I've seen accidents happen (in my past international model aircraft building and flying hobby) with even the bought injection molded propellers (usually bad handling or aging).

Propeller blades can be bought online or at your local model aircraft shop against reasonable prices. You don't want to lose your eye or somebody else's.

Even if used on a car or a hovercraft, please use a bought injection molded propeller and provide proper shielding.

You need WAY more infill or make it solid. Normal props like this are 100% solid for a reason.

To add to that, in my experience with 3D printing the the infill percent is only part of the story for part strength. In many cases adding perimeter loops and not infill is a better solution for part strength.

With a solid part I suspect PETG will come out ahead over PLA as PLA can be more brittle and just snap under shock or vibration.

A nitro engine rotates much faster than an electric one, 30k rpm vs 10k rpm top.

Also, it has much more vibrations (the engine gives torque in sharp pulses, not a continuous power generation). There's a reason if the propellers for electric are not compatible with nitro engines. You will need to step up the game with fiber-infused plastics, and shock resistant plastics, so check CF-ABS, CF-ASA, CF-PC, nylon-CF, nylon-GF.

And use an infill that is equally resistant in every direction, so cubic or gyroid.

And do a simple calculation, concerning the infill: use the weight and the spinning speed to calculate the strength you need for the area where the blade attaches to the hub. I think you need an almost solid infill to hold (solid infill = as many perimeters you need to fill it), and then you can progressively decrease the perimeters closer you get to the tip, replacing them with infill.

For safety on a project like this, it's best to have a self-contained chamber to run a life test until the propeller falls apart. Once a material and design has a reasonable lifetime, then you could use the print.

Reputable propeller manufacturers will already do this. They may even run a shorter burn-in test on product being sold to eliminate defects.

I would suspect PLA as being too brittle. Nylon carbon fiber is probably a better material, but not easy to use. Unless you're wanting to experiment with propeller design, printing propellers will cost you more then buying them.

As Brydon mentioned life testing usually does acceleration such as twice the rate. Temperature is also important. Plastic is more brittle cold and softer hot. You may even want to off balance the axis slightly to accelerate the testing.

Not the answer you're looking for? Browse other questions tagged print-material print-strength or ask your own question.

12
Does the layer thickness have any effect of the strength of the 3D printed object?
5
What is the best color of PETg to use for outdoor durability?
3
Snap-in clamp geometry
6
How to calculate the strength of a printed object?
3
Which common 3D printing materials/methods will suitably replicate (w.r.t. durability) this injection molded Polypropylene item?
5
Which material "creeps" (plastic deformation) the least (or nothing at all) under pressure after being printed?
3
Design connection to motor shaft for printed gear
1
3D Printed Lead Screw