I have a Creality CR-6 SE running Community firmware. It's printing mostly well, in part because it's improvisationally enclosed (sheets of cardboard between it and the closes window to reduce draft, which was killing my prints on bad days). To make it moderately shock-resistant it's placed on a 50x50 cm concrete tile which is placed on 3 mm of foam. The foam reduces vibrations being redirected to the tile while the tile is heavy enough not to care either way. 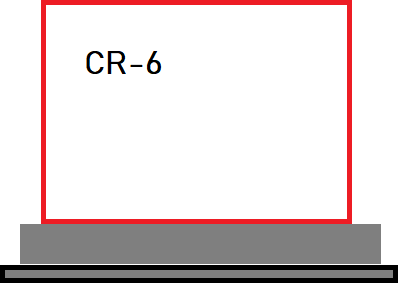 Now it has to move because I want to move my desk into the same room as the printer.

I've been thinking about making a towered enclosure (roughly like the famous Lack approach). However, if I construct a tower, the increased position vector between ground and printer could make the printer shake. Besides, a simple Lack won't work because PLA won't like being confined. Where other materials like getting hot, PLA likes to be ventilated. The obvious solution would be a couple of fans that can be shut-off and covered, but maybe I'm thinking too complicated already. Either way, that's a fixable problem.

I'm currently printing PLA 100% of the time but the enclosure should be able to handle PLA, ABS, and PETG. There's a Raspberry Pi available, so requiring different settings for different materials is not a problem either.

So I can fix all problems, except the shock one. More fans mean more vibrations, so it will get plenty of shocks by itself. Add the shocks of me walking past it, especially if the printer is in a tower, and you can wait for failed prints.

I've seen people put their printers on springs, but is that the best way to deal with it in enclosures? Would it make sense to put the tower on top of the existing foam/concrete base or would it be better to catch the shocks as close to the printer as possible?

First, let's get your physics straight:

To make it moderately shock-resistant it's placed on a 50x50 cm concrete tile which is placed on 3 mm of foam. The foam reduces vibrations being redirected to the tile while the tile is heavy enough not to care either way.

No. The concrete tile gives your printer mass by adding its own to it. Mass by itself results in shifting the point resonance (and thus ringing) occurs, and in conjunction with a flexible mounting (the foam) results in the resonance window getting shifted out of the window where it can be problematic. Nothing about redirecting.

Now, to your problems:

If you want an enclosure, you can mount it directly onto the concrete tile, or you include the buffered concrete in the enclosure. Totally up to you. If you exhaust it, just adding a big PC fan to the back and then a flexible tube to the window to get rid of warmth if you need would be enough.

3 mm is way too little. You should get at least one of those rubber mats from the home depot that is put under washing machines. Those thick rubber pads are usually 10 to 20 mm thick and would decouple the printer movement very well from steps on the floor. You might even want more of a different, softer foam between that rubber pad and the concrete tile.

Not the answer you're looking for? Browse other questions tagged enclosure creality-cr-6 .

34
What air filtration options exist for enclosures?
6
Commercially available 3D printer fume and UFP extractor
0
Safe, cheap, heated enclosure solution for New England garage
1
Order of a HEPA filter and Carbon filter in a filter-stack
2
Is enclosure without ventilation enough to keep VOC's and printer fumes from leaking into my room?