Can you convert a 3D printer to a laser engraver?

If so is there a specific thing I have to buy?

Yes, one can convert a 3D printer into a Laser Engraver, and it isn't even all that problematic.

One such slicer would be Creality Workshop, which would work with any Marlin-run printer, as long as you use the fan as the diode's power source.

Probably a laser... and a mount for the laser. Then connect its power supply to be switched by the extruder supply/signal. Also, there would be no need for any Z-axis movement, beyond setting the correct height of the laser device.

However, unless you are handy with DIY, messing about with microcontrollers and electronics, modifying firmware and have experience in making your own 3D printer, then it is probably easier to just buy a ready built engraver.

That said, and after reading Trish's (more technically detailed and accurate) answer, it probably isn't all that daunting to accomplish. In addition, if you already have a printer, then a modification would be cheaper than buying a whole new unit.

Here is a handy video tutorial, which shows how easy it, in fact, is: 3D printer to laser engraver for under $60

This unit was tested on the Creality Ender 5, but the plug should work for any Creality printer like the Ender 3 and CR-10

This modification also uses the part cooling fan to control the laser and there is no need to remove the extruder - the laser attaches itself by the use of magnets to the extruder. So you can have a dual-purpose printer without that much fuss at all.

The website used to generate the G-code is http://nebarnix.com/img2gco/, and it takes a simple image file as input. The settings recommended by the video are as follows: 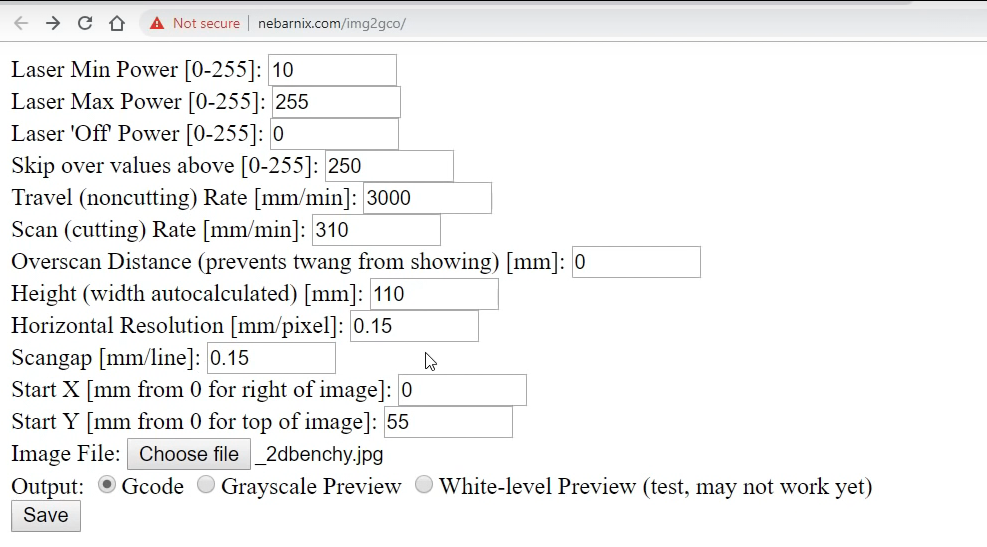 Note: As pointed out in the video, the minimum power should not be zero as this turns off the laser, thereby incurring a delay upon restart. Setting the power to a sufficiently low level - so as not to burn - is preferable, i.e. 10.

Not the answer you're looking for? Browse other questions tagged diy-3d-printer laser .