Alright, long story but I want to provide as much detail as possible:

I have a heavily modded Ender 3 Pro. Mods include:

I'm using Overture Brand white PLA and for the first print that messed up (pic below), I was using the default "generic PLA" Cura settings for an Ender 3 pro.

Anyhow, it caused this kind of print: 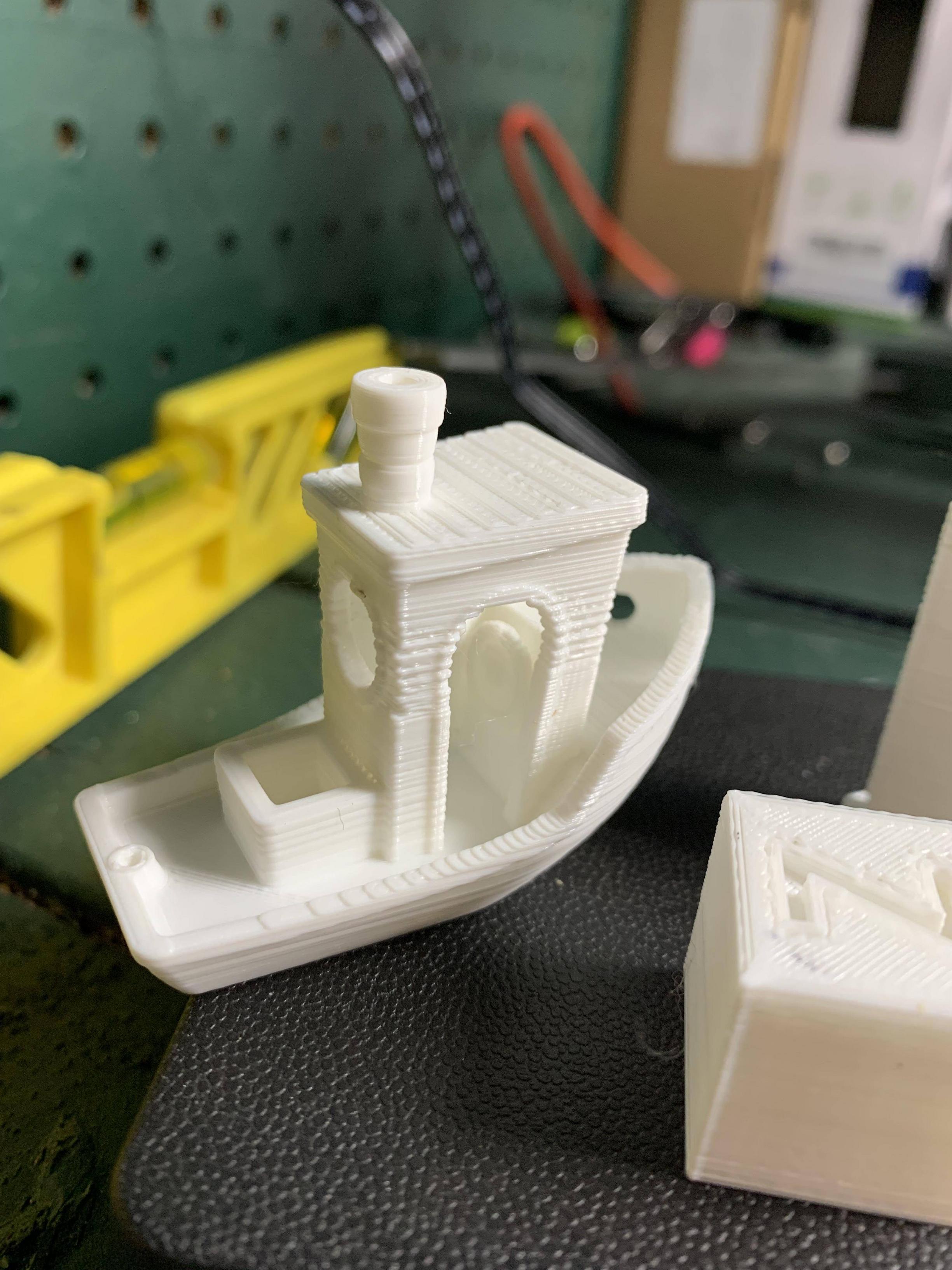 There are a few angles where it actually looks pretty good. The hull is fairly smooth, the first layer went down well, the roofs and bridging look tolerable, but as you can see, especially around the "pillars" it looks I don't know... under-extruded? Like the lines don't connect very strongly. In fact, it might be hard to tell from this photo but the bottom actually ripped off when I took it off the plate, mostly due to weak connections between each layer.

I pretty much went step by step through Teaching Tech's calibration guide.

Long story short, with those few changes I redid the calibration cube and the benchy and they look maybe 5% better but still weird.

My Z-axis squeaks sometimes when moving through a spot 5-10 mm off the bed, so I lubricated them according to the guide here, but I did that prior to that second benchy so it didn't seem to solve it.

After I first posted this, I decided to dive deeper into that squeaky Z-axis. I triple, super-duper checked that both Z threaded rods were parallel to each other and neither was warped/curved/etc... They seem fine. I lubricated them both a bit more and using G-code told the printer to jog the Z-axis up and down the length of the rods about 20ish times. The squeak did eventually go away so I printed another benchy. No dice. Still looks bad.

Per Criggie's answer, I disabled the steppers and moved the axes around to see if they moved smoothly. Both X and Y move great with steppers disabled and then are pretty firm normally. Z is pretty stiff no matter what but that may be intentional. I previously had problems with my Z-axis falling down when prints were over so I installed anti-backlash nuts and with two anti-backlash nuts (one on each rod) I'm not surprised it doesn't want to fall. But again, when I just tell it to move, it moves very smoothly. For instance, I just got out my micrometer and measured the Z movement. I told it to move 100 mm up using OctoPrint and measured the actual movement. Seemed to be 100 on the dot.

I have a BTT filament sensor in the filament path prior to the extruder. I noticed it provided a little friction and I was concerned it was making it hard for the extruder to pull the filament. I removed it, but no improvement in print quality.

One other strange thing I've noticed is the benchy always looks bad in the same spot (the pillars). Makes me wonder WHY it's always that exact spot, not randomly all over.

It's got to have something to do with under-extrusion or flow. I think I ruled out the Z-axis. I made a "tall" benchy by modifying the benchy file to have a platform underneath it. This bumped it up a few cm and the problem still happened in the same spot on the pillars of the benchy (which is now in a completely different spot on the Z. Also, given the "flow" preview in Cura: 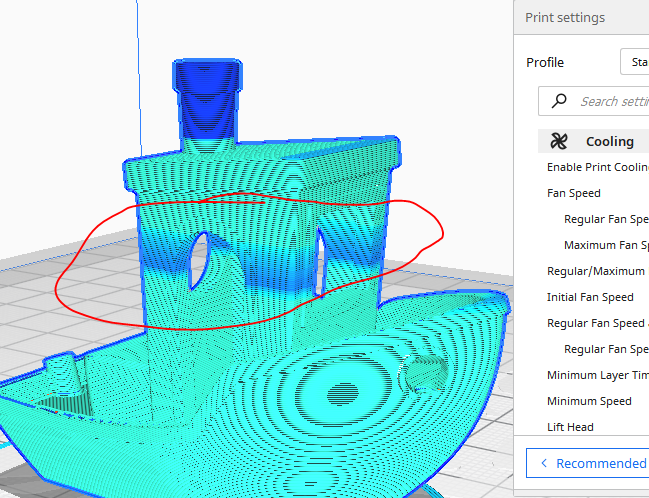 That circled low flow area is where it always messes up.

So now to figure out why it's got low flow. Again, I calibrated the E-steps and it seems to be accurate. I've also printed benchy's where I told Cura to have 110% flow just to check. The last one I attempted didn't just fail, it failed big time and became a blob at that same spot.

I wonder if the extruder gear is worn and slipping and/or the Capricorn PTFE tube is too restrictive for the "budget" filament brand I'm using that might have trouble sliding through it. I have replacement steel extruder gears showing up Tuesday, will update my question then. 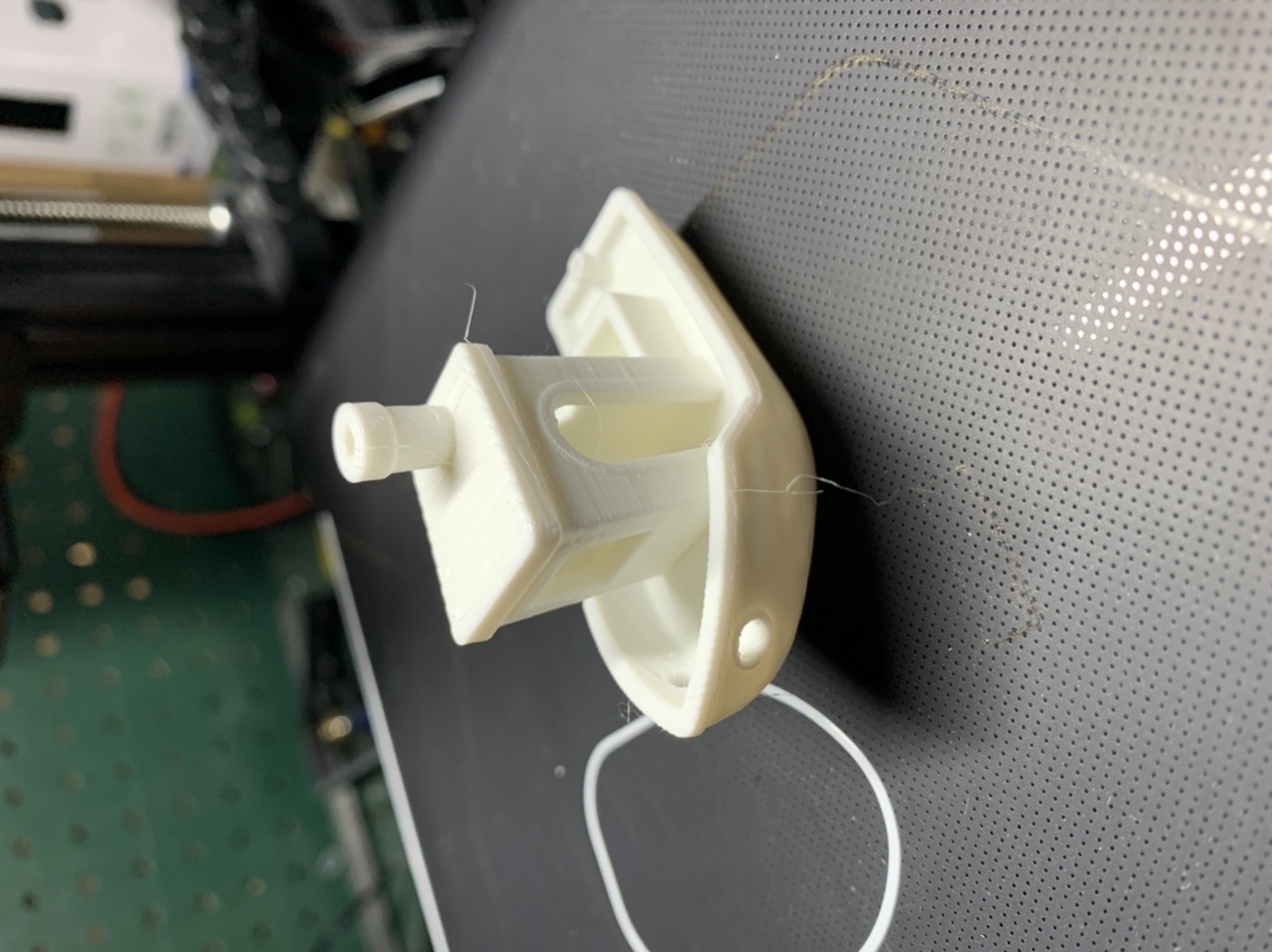 It was a worn extruder gear. I didn’t think it was THAT worn, and when I loosened it a bit and slid it a few mm so that the gear hit the filament in a fresh spot it didn’t improve. But new stainless steel gears showed up today and when I installed one it worked perfect. Same file/settings/gcode that had failed several times previously when testing other things

I see positional errors in X and Y, but Z looks okay.

That suggests one or both of your belts is stretched, perhaps damaged, or maybe just loose.

Try engaging the stepper motors in the device's panel and push the head left/right or pull the bed toward/away from you. They should both resist handforce, and you then feel like it needs to be pushed with full arm/shoulder force to move it (but don't actually force anything with that level !!)

There should be none/almost no play in X or Y with the steppers locked/engaged.

Then disable the stepper motors in the same menu, and both bed and head should slide with one finger's push.

This test does not work for Z but that axis seems fine in your benchy print.

Also check the condition of the drive/tension pulleys at either end of the belts. There should be no powdered plastic from the cogs, nor rubbery bits from the belt.

I cannot see any over/under extrusion, so the extruder/drive is probably okay.

Not the answer you're looking for? Browse other questions tagged creality-ender-3 calibration .

16
Bed leveling method?
3
I can't level my bed any more