How to find enclosed 3D printer that can host 1 kg filament bobbins?

I'm struggling to find out an enclosed 3D printer that allow to load the common 1 kg filament bobbins. Most of the enclosed ones accept only proprietary bobbins (like Dremel or Flashforge).

Do these bobbins ( = 1 kg) rely on a specific standard I can search for? How to filter out the printers that match my request when making a Google search?

I'm aware I can "easily" put them out of the machine using a custom support (or even directly in a dryer as I do for my Dremel) but this partially nullifies the advantage of the enclosure.

There are standards for spools/bobbins/reels

Looking for standards for spools, I started at Alibaba and then came to an actual European manufacturer or retailer of reels: Häfner. They manufacture reels for wires, which are also used for 3D printers. They helpfully provide a chart of their products from about 250 cm³ to a whooping 98454 cm³ - which is about 250 grams of ABS to in theory 98 kilos. However, typically the largest spool you will find for privates is the 300/20 K type with about 3800 cm³, which is more than enough to get a 4-kilo reel of PLA onto it. At times you might find something in the order of 8000 to 10000 cm³ for a rather heavy 8-kilo spool, though that is industrial sizing.

As this single offerer shows, spools are very varied, and the hub diameter of them is not standardized, but the boreholes only come in very distinct sizes.

However, some of the items that are sold as 3D filament spools are actually welding wire spools, for which standards exist, such as this dictating "2‐1/32 inch" arbor holes.

Scale of spools is dependant on the market

But spools below 1 kilo are not useful for mass-production of large parts and even then, 3 kilos is a sweetspot for handling between ease of moving and time spent changing spools. So industrial machines usually take larger spools - or propriatory cannisters/cartridges with a spool.

One of the big ones is the Stratasys F900. It has a print-volume of 914 x 610 x 914 mm and takes "up to 500 cubic inch" cartridges, apparently the largest size of FDM Filament cartridge offered by Stratasys. For the record: 500 cubic inch weigh about 8 kilos in ABS, and about 10 kilos in PLA.

It is almost trivial to modify an existing printer that takes non-proprietary spools to allow taking in filament from the outside without keeping the door closed. A piece of PTFE tube can easily take the position of the spool inside the machine to guide the filament into the machine-mounted intake. The modification might only need a single small hole in the door for the tube or its fitting to get into the machine.

This way you mount pretty much an adapter for larger spools, but you bypass for example automatic filament detection with the spool unless you also open the door and slot in a "disk" of sorts that contains the RFID with the configuration of the mounted spool.

A random example setup, mounting the "outer intake" in an angled block at the center of the former door: 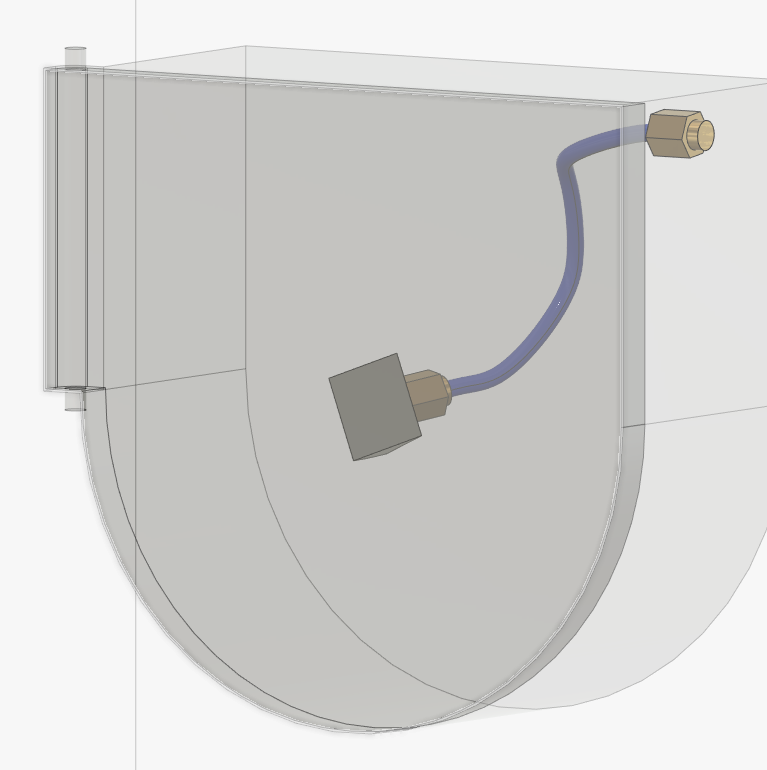 QIDI Tech makes a series of enclosed printers, which would narrow your search a bit. I own an X-Max model which has an internal spool spindle as standard equipment, along with an "ordinary" external mount. The internal spindle will take a standard one kilogram spool. It's considered good practice when printing moisture sensitive filament such as nylon to have such an environment.

With respect to search terms, it's fairly difficult to identify a phrase that would collect the information you require.

11
How many times printed printer can print it-self?
17
Can 1.75 mm filament be used in a printer that takes 3 mm filament?
3
How to create a web-based PHP that can print to multiple printer(when idle) using silent printing
9
Do I need a heated bed for printing PLA in an enclosed printer?
6
How can I avoid that a small bit of filament sticks out of the nozzle during heating?
0
How to find pure PLA filament?
2
Is enclosure without ventilation enough to keep VOC's and printer fumes from leaking into my room?
0
3D printing filament that can absorb photosensitive liquid