How do I determine the acceleration value for my printer?

What process can I follow to determine (or how can I calculate) the fastest acceleration value my printer can use without causing problems in my print?

I'd prefer a process I can follow over a formula I can plug values into, especially if the formula includes magic numbers.

As Tom pointed out, binary search is the best way. In case that term isn't familiar to all readers, here's a little more detail:

Each repetition will cut the range in half. Keep repeating until $L$ and $H$ get as close as you want; say, within 5 % of each other or so.

I wouldn't bother trying to get super-close, because the workable value will vary somewhat over time (friction from dust getting on various parts; slight voltage differences; different mass and pulling tension for the filament roll, temperature of motors, complexity of the object you're printing, behavior of the slicing program you use, you name it).

A tool that you might find useful for experimenting with acceleration is RepRap Centrals Acceleration Calculator (at the bottom).

By setting an acceleration, length of travel and target speed, you can see:

For instance, setting acceleration = 3000, length = 30 and speed = 150 means it will travel 4 mm before reaching its desired speed of 150 mm/s, while that same acceleration theoretically could give a speed of 300 mm/s for the given distance: 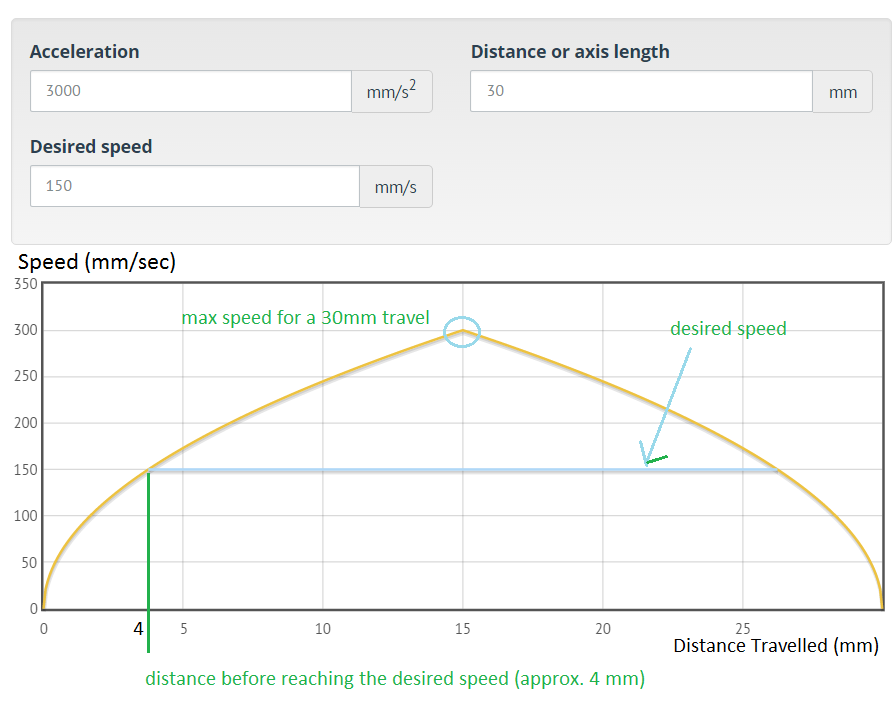 In many cases your printer will have some limitation in maximum speed or settings given by your provider that can be used as a starting point. If not, trial and error is the most straightforward way of doing it.

I would separate speed calibration into three task:

As a rule of thumb, it might be smart to then set the actual speed, jerk and acceleration approximately 20% below the the maximum found as a safeguard when printing.

Also, bear in mind that the strength of stepper motors lowers for higher speeds, so that the nozzle will not hold its path very well if obstructed. If this becomes a problem, consider lowering the speed.

Most printers use between 2000 and 5000 mm/s2.... extrusion moves are usually 2000 (on average, between different printers), travel is normally seen at 3000-5000, though for most lower end or duel direct drive extruder (heavy) printers, this value should be lower (some as low as 500-1000, some as high as 2000 for travel). Heavier extruders need lower values, as well a slower jerk values, to avoid the motors skipping. The jerk setting being set lower can actually be beneficial, as this makes for smoother extrusion after a corner or a hole (some people will see ripples near these areas as it accelerates out of the direction change - lower values make these ripples smaller, but slightly increase print time).

I've just modified mine with a prototype carriage design that I'm working on. It's added about 100 grams to the stock weight. It was finely tuned before, so this extra weight set it over that pillow of 20-30% in the setting, and makes the X and Y skip as it jerks around the plate; especially in high resolution models, particularly high resolution circles with 200 faces on the vertical axis, because the printer tries to jerk after each node - normally that isn't an issue, but in heavy designs, the jerk setting needs to be lowered. I had my jerk at 20 for XY, and its now at 4, after having tested and failed 8 and 15 values. The acceleration was at 2000 for both extrusion and travel (some firmwares don't allow separate values for travel and extrusion moves, but if yours does, it's best to have travel value about double the print moves - when your travel is twice the speed of extrusion moves - so use that 1-1 formula in relation to speed, scale it for each desired speed set in the slicer). Mine has been tested at 2000, 1500, 1000, and 800, failing all of them, with jerk setting of 5. Now testing 500 for acceleration, and beginning to get a little confused as to why this is happening.

Now I'm having second thoughts... After going as low as 800 from 2000, and still getting skipping (seemingly worse) am I getting this backwards here? Do I need a higher value if the motor is skipping on quick moves? My understanding is that lower is better for those problems, but perhaps I've confused myself.

Not the answer you're looking for? Browse other questions tagged calibration or ask your own question.

1
How to make sure we reach the total feedrate despite jerk
1
What specifics do models need to have to estimate the maximum acceleration my printer can withstand?

11
Determining the temps and speeds for DIY printers?
6
What prints can I do to test/calibrate my printer for precision?
8
How do I calibrate the extruder of my printer?
5
How can you calibrate extrusion multiplier value in Slic3r WITHOUT changing printer settings in memory?
0
How To Trace The Line Of A Print With The Nozzle (With No Plastic Printed)
3
Can't 'tune' out my problem, please help!