I have been studying the differences between version 2.x and version 4 of the P3Steel frames - in particular the AC08 bracket at the top of the frame which secures the top of the smooth bars and threaded rods of the Z axis on both the left and right sides. Here is the laser cut parts, for version 1.x, showing the part labelled as AC08: 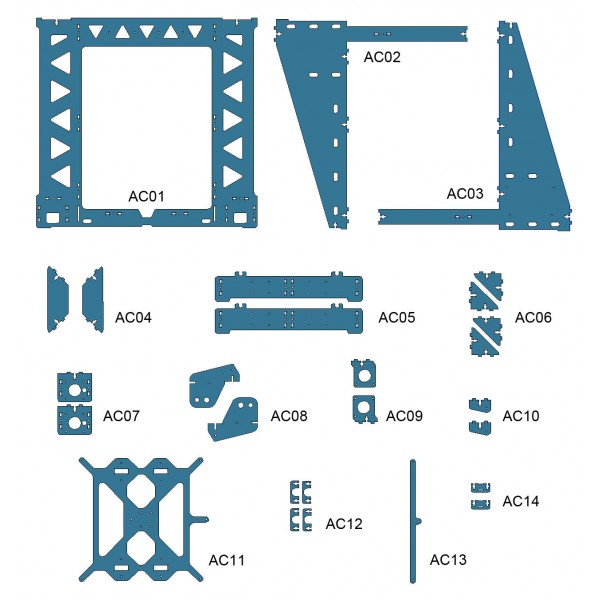 Version 1.x/2.x has the AC08 bracket with two holes, one for the threaded rod and one for the top of the smooth bar (from the lasercut image): 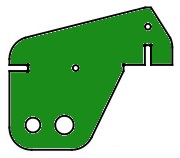 However, in version 4, the corresponding top Z axis bracket only has one hole for the smooth bar and just an indentation for the bearing which holds the top of the threaded rod (from Twitter): 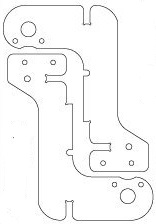 Here is a close up of the diagram from the google docs repository, listed in the v4 section on the RepRap Wiki page for the P3Steel, which shows the bearing assembly just apparently "resting" against the indentation: 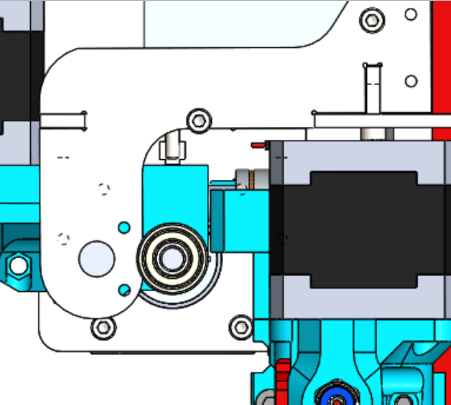 Here is the bracket shown with the bar and threaded rod (again, from google docs): 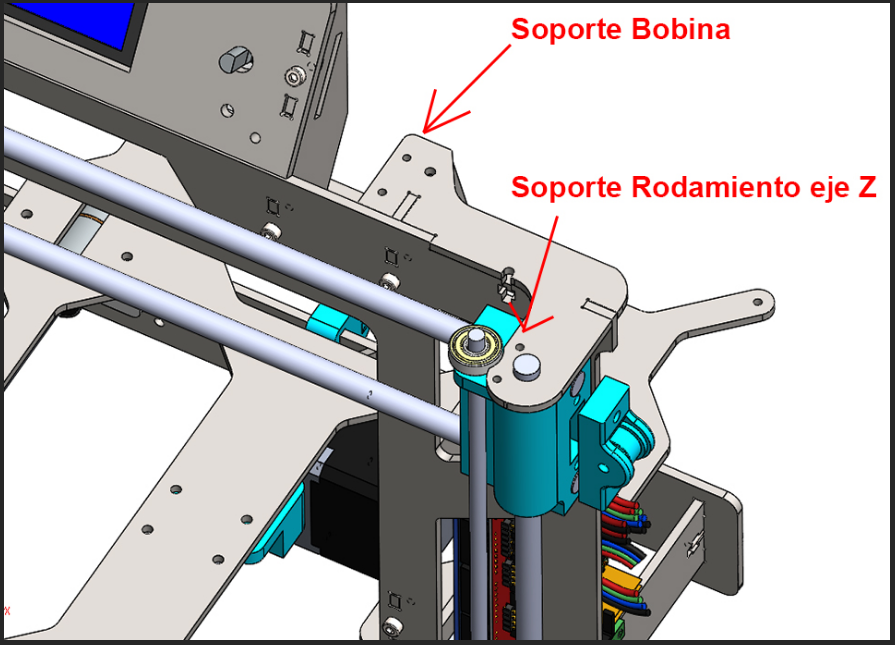 Does anyone know why the top of the threaded rod is not secured by a hole, as it was in version 1.x/2.x? It just does not look particularly well secured.

Under the list of version 4 changes, see 2. Frame versions, it is mentioned:

The extruder no longer hits the Z axis top bracket

Is this the reason why the change has been made?

I've just seen this right now, I'm Alvaro Rey, the designer of the p3steel v4 mod. The change was made, because with previous versions with the extruder homed, if you go up in the Z axis, the extruder motor could hit the Z axis top plate. So, in order to avoid that, I just changed the design.

The bearing in the z axis is not necessary but some people prefer to use it, in order to avoid wobble in the threaded rod.

Anyways, I designed a printer part to fix the bearing in the Z top plate.

This is mere supposition on my part, and not a definitive answer. The real answer would need to come from either the designer or someone connected to them, I guess. I have contacted people around the designer and invited them to comment/answer, but that appears to still be "pending"...

In response, or - rather - with respect to, to the comments below by tjb1 and Tom, I have been reading around the topic, and found some interesting articles.

The excerpt below from "An exploration of the topic", backs up Tom's argument about constraining the rods at both ends being bad practice, and explains why it is so. Whilst acknowledging that a loose, or floating end, is still an issue that needs to be dealt with, the article also states that constraining the end is not really a solution, as it can create more problems elsewhere (I have added the bold highlighting to the relevant text):

Wobble is pretty simple. Because the lead screw is mounted rigidly to the motor, it needs to be perfectly straight and square to the axis its trying to move. If it's not, as the motor rotates, that offset will be converted into an elliptical motion instead of turning in a perfect circle. In big CNC world, as the axis is normally bolted to a huge/heavy table which refuses to yield to this movement, it results in breaking your motor or motor coupling (weakest point in the connection). This is what flex couplings are designed to fix – if you can’t guarantee a perfectly square mating between motor and axis, you use a coupler with flex so that any movement can be soaked up in flexing the coupler and the lead screw/rod moves in a nice circle without busting your motor or mounts. This is true when you have a good solid supported connection on the lead screw like you’d see on a ‘proper’ CNC. However on the Solidoodle, as the top end of the Z-Axis is ‘unsupported’ and its only connection to anything is to the table via a tiny little nut, its free to ‘flop about in the breeze’ so to speak. Even a small 0.1mm offset from center can result in a much much greater ‘wiggle’ at the top of the screw clearly visible to the eye. Throw in even a 0.05mm bend in the rod, and it gets further amplified.

Adding better support to the axis, through a taller nut, multiple nuts, or supporting the end, would reduce the influence of this wobble. You do however, risk moving it to something else entirely – for example, making the lead screw rigid would mean that the forces would end up moving the motor itself, potentially causing fatigue issues with how its bolted to the sheet metal case (mine already moves a fair bit and its ‘stock’... making the screw rigid would see the motor having to absorb all that movement instead of half of it disappearing in movement of the screw...). Solving the motor movement by securing it ‘better’ to the case would mean that the movement now gets soaked up in the motor shaft and bearing, leading to premature stepper motor death.

Thus, I had originally presumed, when first posting this question, the earlier versions of the model would be superior, as they secured the top of the z-axis screw mechanism, that would reduce the amount of "flapping about" of the loose end, which in turn would result in less wobble. However, I had not bargained for the negative consequences.

So, is the reason that the top brackets of the z-axis, in the version 4 of the frame, lost their threaded rod/leadscrew top-end constraint, therefore to prevent premature motor wear, at the expense of exhibited wobble?

Not the answer you're looking for? Browse other questions tagged prusa-i3 p3steel or ask your own question.

7
Z Axis getting stuck with Marlin 1.1.0-RC7
8
Z-axis steppers and bed alignment problems
1
Orientation of long thin rod on P3Steel v4
1
Is the 8mm x 20mm bearing axle for the X-axis idler (of a P3Steel) a custom part?
3
Problem in X and Y-axis dimensions
3
Z-axis comes down and presses the bed while printing
7
Screeching Noise when moving the Z-Axis Down
2
Which connector should I use between the power supply and the Einsy board?