I have bought myself an I3 3D printer - it comes with a thermistor which is then placed into a hole in the hotend and held in place by a grub screw.

Sadly due to my lack of care I managed to crush the wires with a pair of vice pliers whilst trying to remove the nozzle as it was clogged.

I have since unblocked it but now every time I turn on the 3D printer instead of giving a minimum temperature error it says it's 260°C - even if it's left off all night and I unplugged the thermistor. Otherwise, it seems to be fine.

I want to know can I just replace it with a thermocouple and a Maxim amplifier board (the one that Marlin supports, I forget the name)? The thermocouple I have in mind is one that has the junction exposed (see image below), does this matter?

I plan to re-route it in the firmware to use A15 instead as I believe I must have blown the analogue input, right? 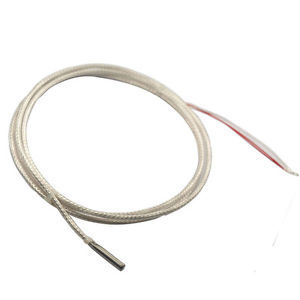 My printer uses thermocouples, and it appears that yours does also. I'm not sure what you mean by "crushed", but you can check to see if the wires are shorted to the heat block or to each other. It is unlikely that you've damaged the input to the control board by doing this. Shorted wires can give the same readings as no thermocouple attached. You can also get errors induced through ground isolation if wires are shorted to the heating block.

Changing this out for a different system with a different input amplifier sounds like a nightmare in the making, and I'd only attempt it if I could not fix the existing problem or find a direct replacement.