Why does Cura insert G0 commands between G1 commands while Slic3r doesn't?

While looking into G-code I was wondering why Cura inserts G0 commands in between G1 commands every other line like this:

It seems like it wants to move to a slightly offset starting position for the next extrusion. I dont understand why, though. It wants to have touching lines as a result, doesn't it?

I do see this making sense in a fill situation, - this section is called 'type: skin'. How does slic3r get away doing infill without this?

Am I correct to read slic3r gcode correctly to use G1 instead of G0 commands for this?

However, I don't think any actually firmware implements this, and a G0 behaves in the exact same way as a G1.

What the piece of G-code you posted is doing is creating a solid infill, which consists of a bunch of parallel lines, each slightly offset from the next: 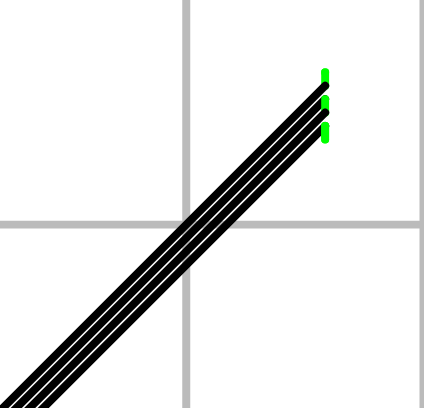 It makes sense that no material is extruded when it moves from one line to the other, as otherwise too much material would get deposited at the edge.

Not the answer you're looking for? Browse other questions tagged slicing ultimaker-cura slic3r .

5
Why do I have problems trying to get Slic3r to load a config file?
4
Why does slic3r get an error "302 moved temporarily" when uploading to OctoPrint?
4
Cura 3.5 doesn't launch repeatably
2
Cura doesn't slice
3
CURA doesn't want print bridges
5
Why does a raft adhere to the bed while skirt does not?
4
Why is Cura printing vases much slower than the printer can go?
2
Cura variables and initial G-code commands