My Replicator (you know, the one made of balsa wood) has blown a voltage regulator on its MightyBoard for the second time. The first time, MakerBot graciously replaced it. However, they replaced with the same model board with no apparent fix for the commonly faulty voltage regulator. I can't afford the now $500 replacement board, so my option is to replace the faulty component and hope no further damage was taken on the board.

As MakerBot Industries did not need me to send in my old board, I've followed these steps to try and replace the voltage regulator on the old board.

I tried to test it by plugging in the power and the RGB LED strip. The stepper motor driver LEDs turned on, but the LED strip and none of the other on-board LEDs turned on. I'm not very seasoned when it comes to electronics, so can anyone explain what the actual pinout should be or suggest other ways to resolve this issue?

So far I've replaced the regulator on my old board with some success. Before the replacement, the board wouldn't turn on (on-board LEDs wouldn't turn on). Now, all of the proper status LEDs turn on, but the board seems to be stuck in a boot sequence. The LCD screen provides two lines of block characters (as it normally does when initializing), but just hangs up there. I tried connecting the machine to my PC to try and restore the board to factory settings and install the latest firmware. However, the PC couldn't find the machine and I began to smell a bit of burning. I'm not sure if this is a result of permanent damage from the original regulator failing, or improper installation of the new regulator.

I'm going to dig around a bit more before attempting this fix on my main board. I'll edit this post as I continue the project.

So, I've now attempted the fix on the newest board (the reason for this question). The results of this board are the same as the old one. I actually get power on the main board, but the LCD screen just shows two solid lines. I've taken pictures of what I've done. 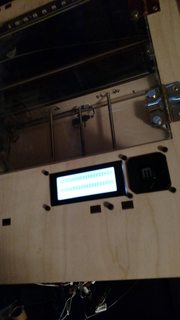 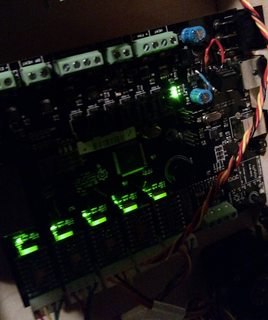 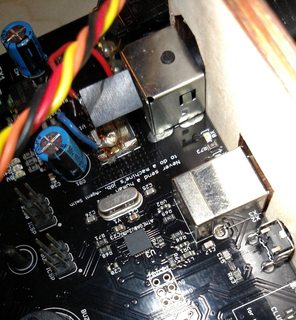 What's the part number of the regulator you're putting in? The pin assignments vary from one part to another, but you can probably find them from the part number online. Some parts have the ground pin also connected to a metal part of their case. The green wire from the board should be ground (no promises!)

Assuming you've got a voltmeter, you can use it to find out which pins on the board are power and ground (easiest to do before the regulator is installed...). Then once installed, check that you're really getting 5V versus ground on the remaining (output) pin.

Since 2 of these burned out on you, I suggest taking steps to reduce the strain on the regulator. Voltage regulators turn the excess power into heat. Some things that can help:

Let us know how it turns out!

Not the answer you're looking for? Browse other questions tagged fdm makerbot replicator-dual mightyboard fff or ask your own question.