I just got a GeeeTech Rostock 301 mixer head delta printer and am having trouble honing in on why the extruder is struggling with my first spool of ABS.

Being the main parts of the printer came assembled I am unsure of where to start taking things apart. I have a read a multitude of possible causes and am hoping for some direction on which is most likely so I can start there.

Extruder clicking. The extruder makes a low grinding noise every time it tries to extrude more than 1mm of filament using the manual controls. Again I am working with ABS so I have the hotend heated to 250 degrees C. The extruder had no trouble when I was first putting the filament in and using the extruder to push it thorough the Bowden tube.

But when I tried using the manual controls to extrude a small amount of filament it seems to be fine, just a small time delay between the extruder moving and the plastic coming out of the hotend.

Things I have read to try

Again this a kit printer and the involved components came assembled (see below) so I am not sure what I should look at first. I assume that if it came pre-assembled then it is most likely done correctly.

For the first 3 I think its new so it should be clean, in working order. And for number 4 I put what was in the manual except for the temperatures (because the settings shown in the manual were for PLA but it is a PLA or ABS printer)

The printer being a kit came with the print head completely assembled as shown in the picture. 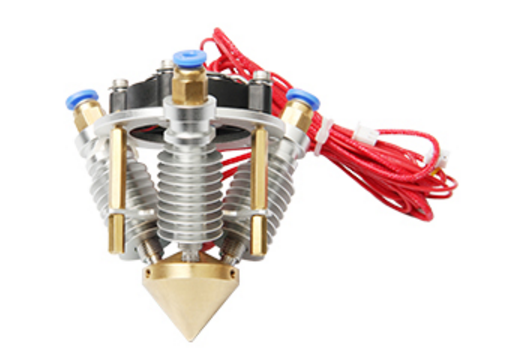 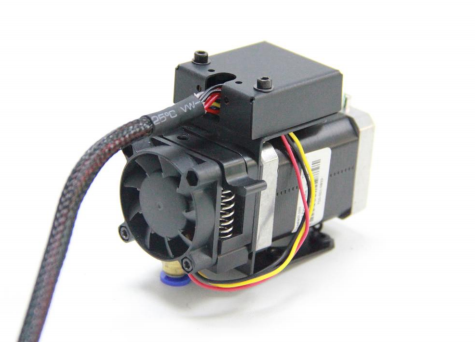 So aside from wiring and mounting these pieces the only thing I did was cut a clean edge on the Bowden tube and connect that to the extruder.

First you have to see if nothing jams the filament (blocked nozzle or anything in its path, PTFE tube not good, etc).

If none of the above, then go for the motor. The problem could be from bad settings, low power or a motor malfunction. Maybe the motor is no good to begin with.

This is worth pointing out as it hasn't been said yet, make sure your stepper driver isn't overheating. If it overheats, it will cause the stepper to temporarily shut down, and it will click when it happens. This could be caused by inadequate power or by insufficient cooling.

I've had the same problem, nozzle was just too close to the bed and motor required a little bit mode power so I turned a little bit a pot on stepper controller. Since then no problem, also is good to rise a bit a temperature ;)

Not the answer you're looking for? Browse other questions tagged extruder abs or ask your own question.

7
Loss of extrusion in Stratasys FDM liquefier
4
Delta 3D printer extruder?
8
How do I calibrate the extruder of my printer?
2
Moving Extruder Gear Assembly
4
Ender 5: Bowden tube shifts in/out of extruder during retractions
6
How does slipping Bowden tube affect retraction or does it at all?
4
Marlin firmware question for dual extruder
1
How to unload filament as cleanly as possible using the extruder motor?
2
Clicking noise from the extruder and no filament coming out